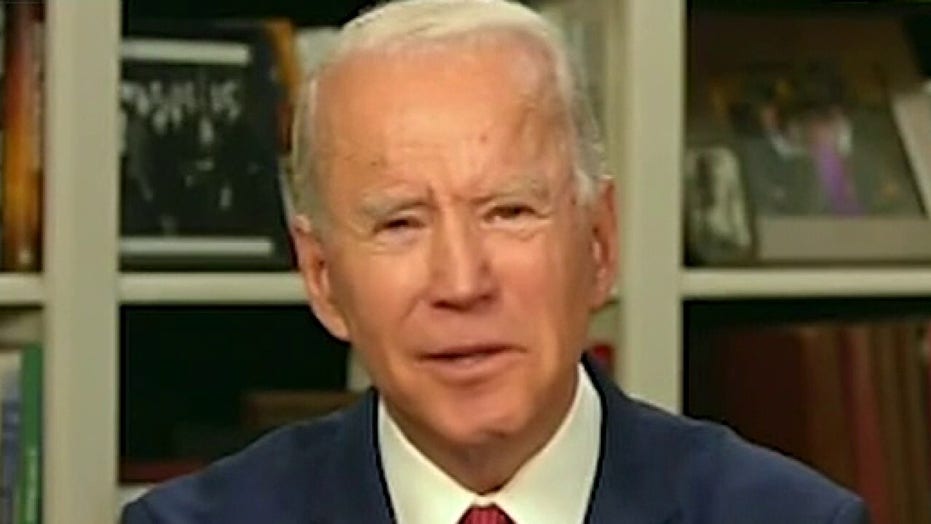 But can the presumptive Democratic presidential nominee spit it out? Fox News contributor Raymond Arroyo investigates on Friday Follies.

With most Pennsylvania voters concerned about catching coronavirus and nearly six-in-ten believing the Trump administration was too slow to act, Joe Biden leads Donald Trump in that battleground state.

Biden is preferred over Trump by 8 percentage points (50-42 percent), according to a Fox News Poll of Pennsylvania registered voters.  That is slightly larger than the poll’s margin of sampling error.  Eight percent are undecided.

Trump received 48 percent of the vote in 2016 and won Pennsylvania by less than one percentage point.  It was the first time a Republican presidential candidate had won the state since 1988.   Currently, 47 percent approve of the job he is doing as president and 51 percent disapprove.

Thirteen percent of voters who approve of Trump’s job performance are not currently supporting his re-election, and either back Biden (7 percent), won’t vote (1 percent), or are undecided (5 percent).  That makes his 42 percent share of the vote lower than his 47 percent approval rating.

“This segment of voters who approve of the job Trump is doing but don’t currently back him against Biden is interesting,” says Democratic pollster Chris Anderson, whose firm conducts the Fox News Poll with Republican Daron Shaw.

“If voters approve of his leadership style but are questioning if it is right for the future, holding onto Pennsylvania will be challenging for Trump. But if they like Trump personally and will line back up behind him in November, the race could be very close.”

Nearly half, 45 percent, have a “strongly” negative opinion of Trump, while 30 percent say the same for Biden.

Keystone State voters like their governor.  Fifty-eight percent have a favorable view of Democrat Tom Wolf, and 65 percent approve of the job he is doing.

On coronavirus, 69 percent approve of Wolf’s handling of the situation and 62 percent say his stay-at-home order strikes the right balance, with another 12 percent saying it is not restrictive enough.  Twenty-three percent call it too restrictive.

Fifty percent of Republicans approve of how Wolf is dealing with coronavirus and 49 percent believe his stay-home order is “about right.”

Monday, amid protests against Pennsylvania’s stay-at-home order, the governor extended the mandate through May 8.  The Republican-led state legislature is pushing to reopen things more quickly.

Yet nearly two-thirds of Pennsylvania voters, 64 percent, want to wait to reopen the economy, even if it extends the economic crisis.  That includes most Democrats (80 percent), while Republicans split (45 percent wait vs. 42 percent open).

Even those “very” concerned about suffering economic hardship because of the virus prefer waiting (64 percent) over opening the economy (24 percent).

All in all, 73 percent are concerned about personally getting infected with coronavirus, and nearly as many, 70 percent, are worried the pandemic will hurt them financially.

Majorities say Trump was too slow to respond to the outbreak (58 percent) and disapprove of his handling of the coronavirus situation (51 percent).

By a 49-46 percent margin, voters narrowly approve of Trump on the economy.

Sixty-four percent say they are holding steady financially, while 6 percent feel they are getting ahead and 29 percent falling behind.

In the presidential matchup, Biden has a 6-point edge over Trump among those who are holding steady -- and leads by 20 points among those falling behind.

Conducted April 18-21, 2020 under the joint direction of Beacon Research (D) and Shaw & Company (R), this Fox News Poll includes interviews with 803 Pennsylvania voters, randomly selected from a statewide voter file, who spoke with live interviewers on landlines and cellphones. The poll has a margin of sampling error of plus or minus 3.5 percentage points for all registered voters.