The Senate Judiciary Committee on Thursday unanimously advanced the Supreme Court nomination of Judge Amy Coney Barrett at its executive business meeting despite a decision by Democrats to boycott the markup in protest of how close Republicans are moving the nomination to Election Day.

Meanwhile, Senate Minority Leader Chuck Schumer, D-N.Y., said that the boycott "is not a decision the members of the committee have taken lightly, but the Republican majority has left us no choice. We are boycotting this illegitimate hearing."

Barrett was reported favorably out of the Judiciary Committee by 12-0, with no Democrats present.

"That was their choice. It will be my choice to vote the nominee out of committee," Senate Judiciary Committee Chairman Lindsey Graham, R-S.C., said at the beginning of the meeting. "We are not going to allow them to take over the committee. They made a choice not to participate."

Graham also slammed Democrats for allegedly beginning the process that led to the increased politicization of the Supreme Court during the Obama administration, when they removed the filibuster for lower federal court nominees.

"I remember telling Sen. Schumer, 'You will regret this,'" Graham said Thursday of when Democrats got rid of the judicial filibuster. "Today he will regret it."

The acrimony around judicial nominations can be traced all the way back to the nomination of Judge Robert Bork in the 1980s and has been contributed to by, among other things, Republicans' decision to hold open the seat of the late Justice Antonin Scalia for months before the 2016 presidential election.

The move follows a declaration from Schumer earlier this month that Democrats would not "supply the quorum" for votes like the one scheduled Thursday to advance Barrett out of committee. So it is not a total surprise, but other Democrats on the Judiciary Committee did not confirm their boycott until late Wednesday. They said they are making the move in response to the "breakneck speed" at which Republicans are moving to "jam through this nominee" and that Republicans broke "longstanding committee rules to set tomorrow's vote."

Schumer added Monday, "The nomination of Amy Coney Barrett is the most illegitimate process I have ever witnessed in the Senate. And her potential confirmation will have dire, dire consequences for the Senate. For the Supreme Court. And our entire country for generations to come." 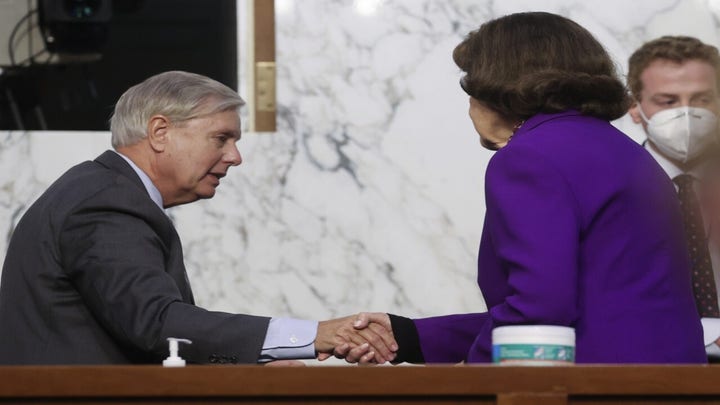 Graham nevertheless on Wednesday said that Barrett would receive a vote despite rules of the committee requiring that at least two members of the minority party be present for the committee to transact business. Graham added on "Fox & Friends" Thursday before the hearing that he would waive the committee rule in order to report Barrett's nomination.

"Under the committee rules you need two members of the minority to conduct business," Graham said. "But they're intentionally denying us that participation. They're boycotting the committee. So what I will do as chairman there will be a majority of the committee present. We will waive that rule. We will report Judge Barrett out. She will go to the floor. And hopefully, by Monday or Tuesday, she will be on the court."

Graham added: "As to my Democratic colleagues’ refusal to attend the markup, that is a choice they are making. I believe it does a disservice to Judge Barrett who deserves a vote, up or down."

The vote on Barrett's nomination, which was originally scheduled for 1 p.m., happened soon after the meeting convened at 9 a.m. The committee also voted on a handful of other judicial nominations and approved subpoenas for Twitter CEO Jack Dorsey and Facebook CEO Mark Zuckerberg. It will put off consideration of a bill on online content policies.

Schumer outside the U.S. Capitol Building Thursday called Barrett's confirmation "the most rushed, most partisan and the least legitimate process in the long history of Supreme Court nominations. Democrats will not lend a single ounce of legitimacy to this sham vote in the Judiciary Committee."

Democrats also hit Republicans on their pandemic response and Barrett on predictions that she could be the deciding vote in overturning the Affordable Care Act (ACA).

"Republicans believe the priority for America is their political move to fill this vacancy on the Supreme Court. We should be passing a massive COVID-19 relief bill," Sen. Dick Durbin, D-Ill., said. "We learned ... she does not have the compassion for the 23 million Americans who are depending on the Affordable Care Act to provide them some refuge and some confidence in the midst of this pandemic."

Added Senate Judiciary Committee Ranking Member Dianne Feinstein, D-Calif: "Last week committee rules were broken to set today's vote. And the Republicans broke the rules today again by proceeding to vote without a Democrat present. All along, Democrats have objected to proceeding on this nomination in the middle of an election. 40 million Americans have already voted ... In 2016 the Republicans set a precedent against filing a Supreme Court vacancy in an election when they blocked President Obama's nominee Merrick Garland."

Graham on Thursday, however, said "to my Democratic colleagues, you had four days of hearings, two days to question the judge. She deserves an up-or-down vote. She did an outstanding job representing herself ... She deserves better than this but she will get out of the committee today. I have the votes to get her out of committee."

Senate Rule XXVI.7(a)(3) says that "The vote of any committee to report a measure or matter shall require the concurrence of a majority of the members of the committee who are present." But the rules of the Judiciary Committee go farther, saying that "Nine Members of the Committee, including at least two Members of the minority, shall constitute a quorum for the purpose of transacting business."

The Judiciary Committee rules add that nominations cannot be reported "unless a majority of the Committee is actually present at the time such action is taken and a majority of those present support the action taken." Committee business has been transacted without minority members multiple times in the past, including in 2014 when Democrats took similar action to what Republicans took today with lower court judges. Committees have discretion over their own rules as long as their actions do not conflict with Senate rules.

Democrats boycotted the first part of the committee's markup meeting last Thursday before the Barrett hearings' final day, sending in only Sen. Dick Durbin, who objected when Graham moved to schedule today's vote on Barrett with a final hearing day still to go, and with only one Democrat present.

"It's clear from reading in the paper that what's going to happen is we're going to be denied the ability to operate as normal, that Sen. Schumer said 'everything is on the table...' But I know what awaits us, so I will now make a motion ... to vote on the motion to report from the committee the nomination of Amy Coney Barrett to the Associate Justice of the Supreme Court," Graham said in response.

Durbin said the move to schedule the vote was "unprecedented" and that "we cannot move forward without another member of the minority present."

Graham shot back, "If we create this problem for you in the future you're going to do what I'm going to do, which is move forward on the business of the committee."

Graham moved ahead and scheduled a vote to report Barrett for this week, and the rest of the Democrats entered the hearing room.

To get around the requirement that two minority members be present Thursday, Graham simply plowed through, ignoring the rule the same as he did in scheduling the vote. Either way, there is no way, barring an unexpected defection from one or more Republicans, that Democrats can stop the Barrett nomination either in committee or on the floor.

Graham and other Republican senators in their remarks Thursday profusely praised Barrett, but also attacked Democrats for the boycott. Sen Mike Lee, R-Utah, in particular accused Democrats of staging a "walkout on the American people" with their boycott.

Lee added: "I suppose we should be grateful that a walkout is all the Democrats will do to Judge Barrett today. Not all nominees have been so lucky."

Sen. Ted Cruz, R-Texas, said Democrats needed to boycott the markup because their "substantive arguments are not persuasive."

Despite what was a largely civil hearing on Barrett that broke expectations for a highly-contentious event ‒ including a comment from Feinstein that Barrett's hearing was "one of the best Senate hearings that I've participated in" ‒ the Democrats' move shows that there are still hard feelings lingering between the two sides in Congress. For Democrats, the issue is the Republicans' blocking of Garland and for Republicans, it is the Democrats' treatment of Justice Brett Kavanaugh.

James Wallner, a resident senior fellow for governance at the R Street Institute and a former longtime Republican Senate staffer, warned that the Democrats' move could backfire on them electorally.

"Democrats’ decision to boycott the Judiciary Committee markup appears to be an electoral stunt, not a serious effort to prevent Barrett’s confirmation before Election Day," Wallner told Fox News. "Throughout the process, Democrats have denounced the process while simultaneously denouncing Barrett as not qualified to serve on the Supreme Court. The problem is that the latter message contradicts the former message. The process is irrelevant if Democrats are not open to giving Barrett a fair hearing."

Wallner added: "They look like sore losers instead of reasonable participants in the process." 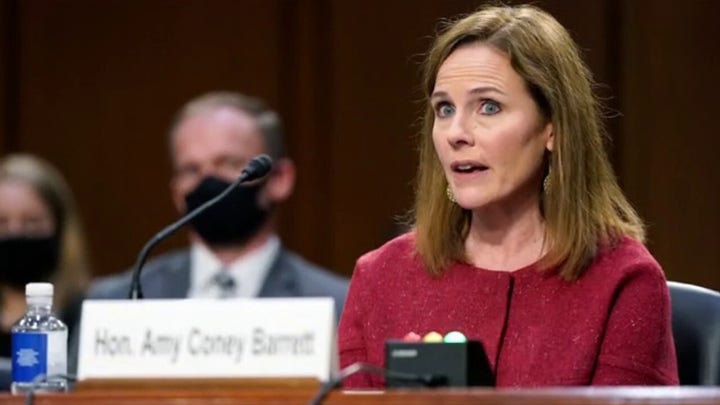 But Democrats believe that their opposition to Barrett, particularly through their warnings ‒ which may not necessarily be accurate ‒ that Barrett is a grave threat to the Affordable Care Act (ACA), is a winning issue for them. Schumer in recent days has forced Republicans into a number of votes on the Senate floor aiming to exert as much political pressure on their vulnerable and moderate members as possible.

Just this week, Schumer has forced two votes to adjourn the Senate until after the presidential election, one vote that would clear the way for the Senate to drop the Republican-backed coronavirus stimulus proposal and consider the proposal that's already been passed by the House, and another that required members to go on record about whether they support confirming a nominee this close to a presidential election.

These votes are not aimed at actually succeeding, but at squeezing Republicans in tight reelection races.

After Barrett was reported out of committee Thursday, McConnell is expected to bring the nomination to the floor of the Senate on Friday and set up a procedural vote Sunday. That would tee up a final confirmation vote on Barrett Monday.

"I regret that we could not do it the normal way. But what I don't regret is reporting her out of committee ... I could not have lived with myself if I denied her her day," Graham said.

"This was about Judge Barrett," Graham added. "This is about her and her nomination."