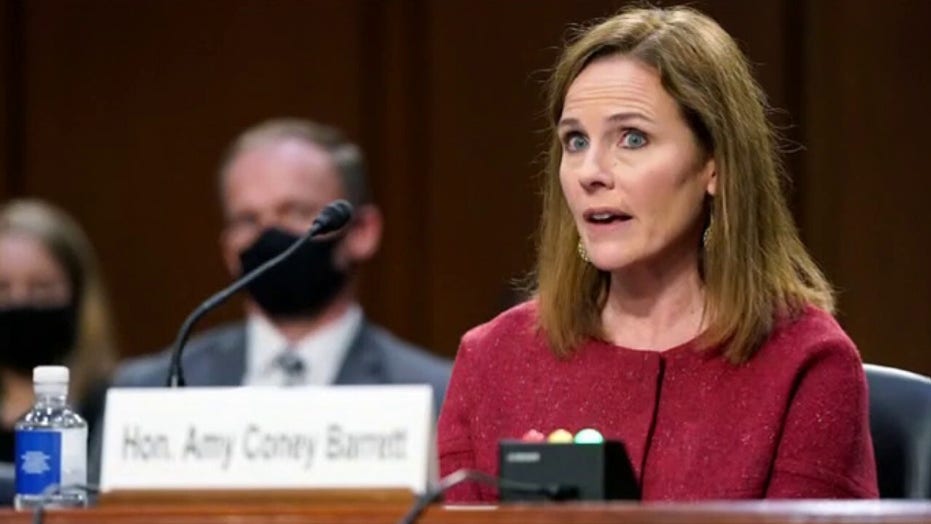 Senate Minority Leader Chuck Schumer again temporarily commandeered Senate proceedings on Tuesday, forcing votes to halt consideration of a $500 billion Republican-backed coronavirus stimulus bill and to shut down the Senate until after the election.

Schumer, D-N.Y., cited his objections to what he called Republicans' "stunt" on coronavirus stimulus and "illicit process" to confirm Supreme Court nominee Amy Coney Barrett before the presidential election. This is despite Senate Judiciary Committee Ranking Member Dianne Feinstein, D-Calif., calling the Barrett hearing "one of the best Senate hearings that I've participated in."

The minority leader, who typically does not take control of the Senate floor in the way he did Tuesday per Senate tradition, has said that he will not allow "regular order" in the Senate because of the way Republicans are handling the Barrett confirmation with what he says is "no respect for the institution."

Schumer first moved Tuesday to remove the Protect Act, which is the smaller Republican-backed coronavirus bill the Senate is planning to consider on Tuesday, from the body's calendar. With a $500 billion price tag, Democrats do not believe it is sufficient as the pandemic moves through what is its eighth full month of a significant economic impact on the U.S.

But Republicans say the $500 billion package is "targeted" in the most important places, including more money for the popular Paycheck Protection Program (PPP), boosted federal unemployment benefits, vaccine funding and at least $100 billion for schools.

"What the Republican leader is offering this week is a stunt," Schumer said of the Protect Act, "designed to look real but designed to fail."

Senate Majority Leader Mitch McConnell, R-Ky., has repeatedly said that the Democrats' $2.2 trillion Heroes Act is packed with too much spending that is not related to the coronavirus. This week he accused Democrats of being "heartless" for continuing "their total blockade of any aid whatsoever unless Speaker Pelosi gets her way on countless non-COVID-related demands."

Schumer added Tuesday: "If my Republican colleagues ... want to do something real, we're going to give them a chance on the floor right now. I'll be making a motion to move the Senate into a posture where we can all vote on the Heroes Act that passed the House. If the Senate passed it, it would head right to the president's desk. Democrats have already modified the bill to make it more palatable to our Republican colleagues, coming down over $1 trillion."

Schumer then offered a motion that would table the Protect Act so the Senate could focus on the Heroes Act. It failed on a party-line vote.

After the Senate defeated Schumer's motion to table the Protect Act 45-52, McConnell moved ahead to a separate nomination for a district judge. That's when Schumer, citing his objections to the Barrett nomination, again moved to shut down the Senate as he did Monday.

"Because of this illicit process, this rush to judgment, the worst nomination proceeding of the Supreme Court in American history that has so defiled the Senate, I move to adjourn," Schumer said. He said the only exception for his adjournment would be to convene for coronavirus-related legislation.

As happened Monday, Schumer was told his motion to adjourn was out of order and would require consent. He then appealed the chair's ruling and put up a motion to table his own appeal. That counterintuitive move triggered a vote, forcing senators to go on the record on the matter.

The Senate voted 52-43 along party lines to table Schimer's appeal, meaning Republicans voted to remain in session and Democrats voted to halt Senate business unless some agreement is reached on coronavirus-related legislation.

Schumer's actions Tuesday are part of a continued effort by the minority leader, with Republicans almost certainly possessing the votes to get Barrett nomination across the finish line, to make the process as painful as possible for the GOP, in part by forcing Republican senators into uncomfortable votes.

Earlier this month Schumer forced a vote on a measure that would ban the Justice Department from arguing against the constitutionality of the Affordable Care Act (ACA) as it currently plans to when a case against it comes before the Supreme Court on Nov. 10.

His "cloture" motion on that failed 51-43 -- it needed 60 votes to pass -- but succeeded in getting six moderate or electorally vulnerable Republican senators to back it, underscoring that some Republicans are in fact feeling the pressure of Democrats' constant rhetoric -- which may not necessarily be accurate -- that Barrett is a grave threat to the ACA.

The Senate Judiciary Committee plans to vote on Barrett's nomination on Thursday before McConnell brings it to the floor the next day. This would set up a procedural vote on Sunday and a final vote on the Barrett confirmation on Monday, seating the current 7th U.S. Circuit Court of Appeals judge on the Supreme Court just over one week before the presidential election.

"Judge Amy Coney Barrett demonstrated that she has the deep legal expertise, dispassionate judicial temperament, and sheer intellectual horsepower that the American people deserve to have on their Supreme Court," McConnell said Monday. “I look forward to the Judiciary Committee’s vote on Thursday. The full Senate will turn to Judge Barrett’s nomination as soon as it comes out of committee. I’ll be proud to vote to confirm this exceptional jurist."