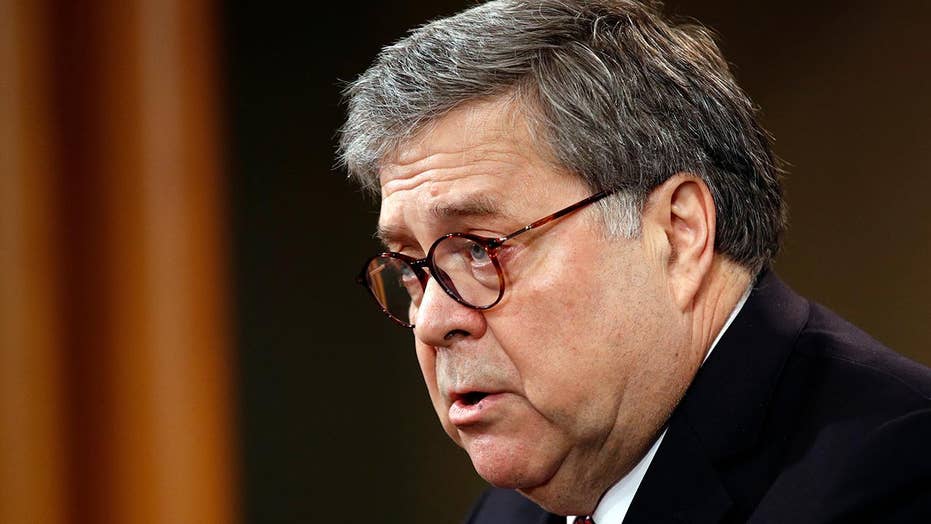 AG Barr answers questions from lawmakers on the Mueller report

“We did not understand exactly why the special counsel was not reaching a decision,” Barr told the Senate Judiciary Committee. Barr later released his own letter saying he determined, from Mueller’s investigation, that obstruction charges against Trump were not warranted -- a decision that exposed him to harsh criticism from Democrats.

But Barr suggested Mueller should have taken a stance on the issue: “We don’t conduct criminal investigations just to collect information and put it out to the public. We do so to make a decision.”

Barr also defended his decision to release a summary of Mueller’s findings initially, before later releasing a redacted version of the report. He suggested the full report would have been released sooner, if Mueller’s team had cooperated with their request to identify sensitive grand jury material from the start.

“Unfortunately, it did not come in that form,” Barr said. “And it quickly became apparent that it would take about three or four weeks to identify that material and other material that had to be redacted. So there was necessarily going to be a gap between the receipt of the report and getting the full report out publicly.”

Barr on Wednesday also stressed that Mueller did not accuse him of misrepresenting his findings. He defended his actions in light of a newly released letter from the special counsel indicating Mueller had concerns Barr's summary did not fully capture the "context, nature, and substance" of his office's work.

Barr testified that during a subsequent phone call, Mueller said he was not calling his summary inaccurate but was concerned about the press reporting on it.

“He was very clear with me that he was not suggesting we had mispresented his report,” Barr said.

The revelation of the Mueller letter quickly fueled a partisan firestorm in the run-up to Wednesday's hearing, with House Intelligence Committee Chairman Adam Schiff saying Barr should resign and other Democrats blasting Barr for his handling of the report.

During the hearing, Illinois Democratic Sen. Dick Durbin took issue with Barr's claim that Mueller didn't find the summary inaccurate, telling the attorney general that attorneys don't put things in writing "unless it's very important." One Democrat, Connecuticut Sen. Dick Blumenthal ripped into Barr, telling him, "I think history will judge you harshly and a bit unfairly and I think you're the fall guy for this report."

Senate Judiciary Committee Chairman Lindsey Graham pushed back against the argument embraced by Democrats that Trump obstructed justice in the Mueller probe, through his firing of then-FBI Director James Comey and other actions.

Graham argued the president could not have obstructed justice – since Mueller found there was no underlying crime by Trump associates of coordinating with the Russians in the 2016 election.

"Was there an underlying crime here?" Graham asked.

“You have to have specific intent to obstruct justice,” Graham also said. “If there’s no underlying crime, pretty hard to figure out what intent might be if there was never a crime to begin with. The president never did anything to stop Mueller from doing his job.”

Durbin, though, referenced the finding in Mueller's report that White House counsel Don McGahn refused to follow orders from the president to fire Mueller.

"I think it's clear Trump wanted this to end," Durbin said. "Over and over again this president was very clear."

Graham, a South Carolina Republican, also zeroed in on concerns that the early days of the FBI's Russia investigation were tainted by law enforcement bias against Trump. He read aloud text messages between two FBI employees, Peter Strzok and Lisa Page, disparaging Trump.

“When the Mueller report is put to bed and it soon will be, this committee is going to look long and hard on how this all started,” Graham said.

Missouri Republican Sen. Josh Hawley also lambasted the text messages between Page and Strzok, telling Barr, "That's why we're sitting here today. An unelected official in this government has open disdain for Trump voters then try to overturn the results of a Democratic election. That's the story here today. I can't believe a top official would try to exercise their own prejudices. That's the real crisis here."

Barr told the panel he’s actively looking into the origins of the Russia probe, saying he’s working with FBI Director Chris Wray “to reconstruct what went down.”

Some Democrats expressed frustration over questions from Republicans relating to the FBI's investigation of Hillary Clinton and her email server during the 2016 campaign. Graham asked Barr if he has "a problem" with how Comey, the former FBI director, handled the Clinton case. Barr replied yes.

"It does not represent what Americans want to hear today," Durbin said.

In her opening statement, Democratic Sen. Dianne Feinstein, the top Democrat on the committee, called for Mueller to testify himself. Barr said he has no problem with Mueller testifying.

Fox News has obtained a copy of the letter, in which Mueller pushed Barr to release the executive summaries written by the special counsel's office. At the beginning of the hearing, Graham asked that the letter be added to the record.

Barr's appearance before the Senate Judiciary Committee provided the attorney general his most extensive opportunity yet to explain the department's actions, including a press conference held before the report's release, and for him to confront head-on the allegations that he's sacrificed his integrity to become the president's protector.

Barr is also separately invited to appear on Thursday before the Democratic-led House Judiciary panel, but the Justice Department said he would not testify if the committee insisted on having its lawyers question the attorney general, instead of members of Congress.