AG Barr: Democrats were 'afraid to let me speak', politics is their 'secular religion'

AG Barr: Democrats were 'afraid to let me speak', politics is their 'secular religion'

The left has "pulled away from the umbrella of classical liberal values that have undergirded" America and made a "secular religion" out of seeking "complete political victory," Attorney General William Barr tells "Life, Liberty & Levin" this week.

"They view their political opponents as evil because we stand in the way of their progressive utopia that they're trying to reach, and that's what gives the intensity to the partisan feelings that people feel today, because for them, this pilgrimage we're all on is a political pilgrimage. Everything is reduced to politics for people who don't have that perspective."

Barr also reflected on last month's contentious appearance before the House Judiciary Committee, which Levin said was characterized by "absolutely disrespectful" treatment of the attorney general. 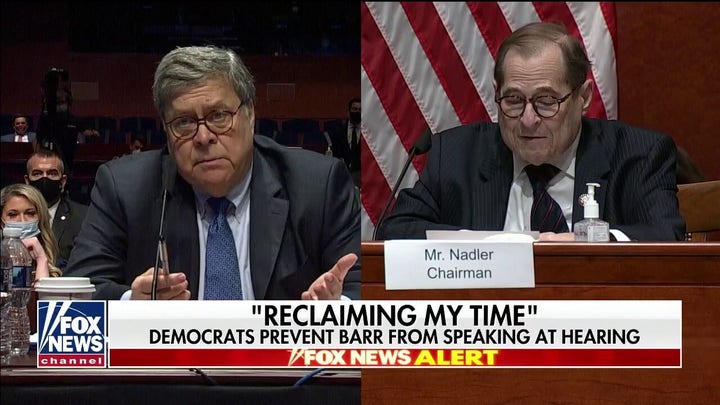 "I think they were afraid to have me speak," Barr said of the spectacle. "And so they decided to burn up all the time and not give me any time to answer. So I quickly caught on to the tactic."

Reflecting on how politics has changed since his first stint as attorney general under President George H.W. Bush, Barr told Levin that back then, "you could have friends across the aisle. You know, politics was part of your life, but it wasn't all-consuming. It wasn't everything. You could, you know, have communications and so forth with others. But it's now become all-consuming for many people."

Barr theorized that the left "really represents a Rousseauian Revolutionary Party that believes in tearing down the system, that what's wrong about America today all has to do with the institutions we have and we have to tear them down."

ANDREW MCCARTHY: BARR'S DIFFICULT DILEMMA -- HOW TO GET POLITICS OUT OF DOJ

The attorney general agreed with Levin's statement that such revolutionary ideology has "devoured the Democrat Party in the last couple of years" and influenced their conduct during the Judiciary Committee hearing.

"I said during my hearing: 'Can any of you just come out and say it's not OK to burn down federal courthouses?' I mean, they talk about the rule of law. They talk about the importance of the federal legal system to protection of civil rights. Well, the heart of that is our court system. And they're not willing, not one of them piped up to say, 'No, it's not OK to be burning down federal courts.'"

A few Democratic lawmakers, Barr suggested, "are true believers" who are "essentially revolutionary in their outlook" and "believe in tearing down the system.

"But many of them are just cowards   and are afraid from, you know, about a challenge from the left. So for them, it's careerism."