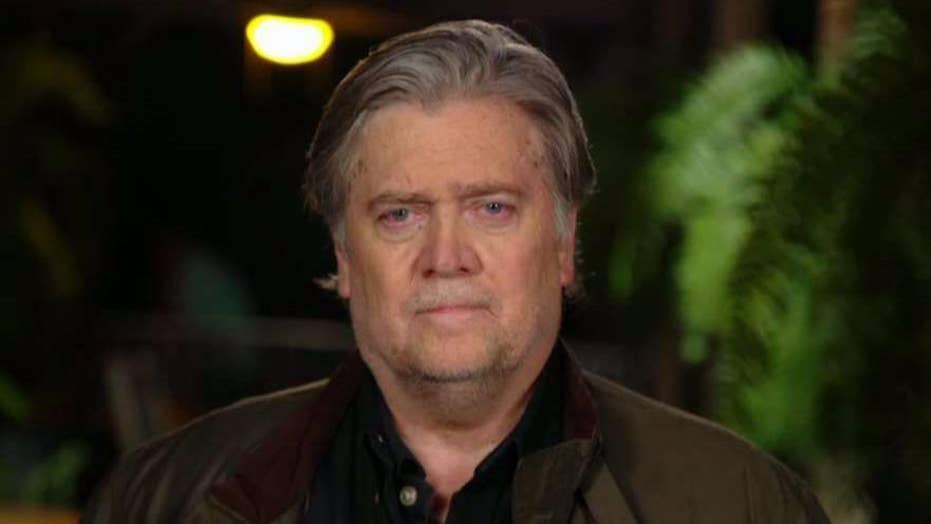 A feisty and passionate Steve Bannon stood up against Senate Majority Leader Mitch McConnell and other establishment Republicans during an interview on “Hannity” Monday night while doubling down on his support for his former boss.

“I’m here to support Donald J. Trump,” he said during the interview from Alabama where he was stumping for Republican Senate candidate Roy Moore, who is running against incumbent Sen. Luther Strange, who has been endorsed by the Oval Office. “The hardcore Trump people are not here to defy Donald Trump. We are here to praise him. And I think the best way to do that is to send someone to Washington D.C. -- for Alabama to send someone who is going to have the president’s back.”

Bannon -- who pointed out early in the interview with Sean Hannity that he was back to wearing the bomber jacket made infamous during the 2016 campaign -- pointed blame at McConnell, R-Ky., and other Republicans on the hill for trying to sabotage Moore’s campaign ahead of the runoff vote Tuesday.

“I think Roy Moore is the guy that is going to represent Donald J. Trump and fight the establishment. It’s very simple. This election is $30 million being spent by Mitch McConnell and that crew of corrupt and incompetent politicians and consultants. They raised $30 million of outside money to destroy Judge Moore.”

For months, several reports have suggested a simmering feud between Trump and McConnell. Last month, McConnell insisted he and the president were working together, adding: “We have a lot of work ahead of us, and we are committed to advancing our shared agenda together and anyone who suggests otherwise is clearly not part of the conversation.”

Bannon offered further explanation as to why he has thrown his support behind Moore, despite his former boss supporting Strange.

Hannity asked Bannon at one point what his thoughts were on the establishment criticizing him and Republican-on-Republican attacks with dirty campaign ads against Moore in Alabama.

Bannon left his post at the White House last month. He has since returned to his old post as executive chairman of Breitbart News.