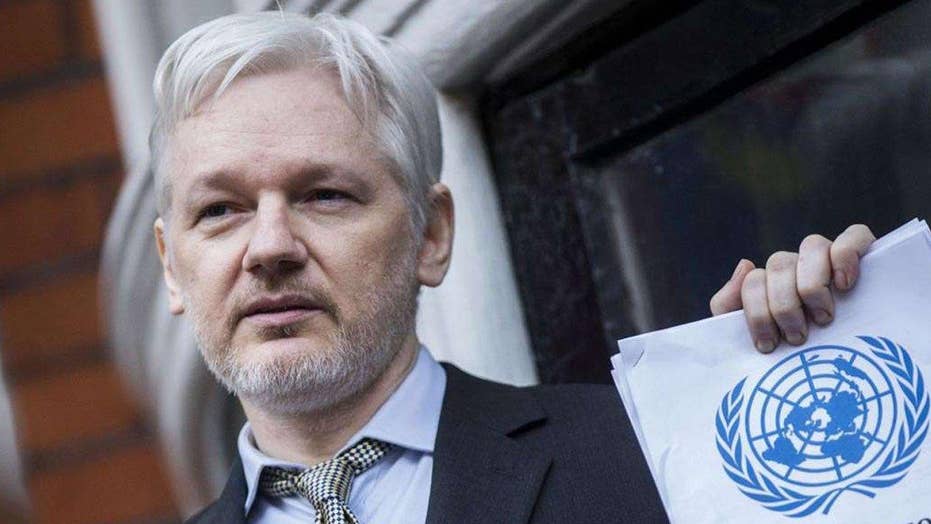 WikiLeaks founder Julian Assange fired back Monday at the U.S. intelligence community for its report stating the anti-secrecy website was used by the Russian government to distribute hacked information from Democratic figures during the run-up to the presidential election.

Assange, speaking during an audio-only Periscope Q&A session, said the source of his information was not a member “of any government” or “state parties” and did not “come from the Russian government.” The WikiLeaks editor-in-chief blasted Friday’s declassified intelligence report on “Assessing Russian Activities and Intentions in Recent US Elections” as being inadequate and misleading.

He added: “It was clearly designed for political effect.”

Asked Monday whether it's possible that WikiLeaks' source was a go-between affiliated with the Russian government, Assange said he didn't want to "play twenty questions with our sources."

The intelligence report, prepared at the direction of President Obama, laid the blame for the breach of top Democratic officials’ emails directly at the feet of the Russians, whom the report said launched cyber operations as part of a Vladimir Putin-ordered “influence campaign.”

“We assess with high confidence that Russian military intelligence … relayed material to WikiLeaks,” the report said, adding this included material from the DNC and senior Democratic officials.

WikiLeaks famously published emails from top DNC officials before the 2016 Democratic convention, and later published thousands of emails from Clinton campaign chairman John Podesta -- but Assange has steadfastly insisted, including in a recent interview with Fox News' Sean Hannity, that Moscow was not the source.

Asked Monday if he believed the intelligence community’s finding had been “fabricated,” Assange stopped just short, saying: “Most of this so-called intelligence report is not even fabricated. That is, it does not even make assertions for the most part to rise to the level of fabrications … it uses speculative terms and admits its own speculation.”

The report itself, perhaps in anticipation of such challenges, noted that the declassified version “does not include the full supporting information on key elements of the influence campaign.”

But Assange later indicated he didn’t think it mattered who supplied the information to his group.

“Even if you believed that hackers of some kind illicitly obtained the Podesta emails and the DNC emails we published … what are we talking about in terms of impact?” Assange said. “...What was discussed are the words of Hillary Clinton, John Podesta and her team revealing unethical practices, corruption, hypocrisy, etcetera.”

He asked: “Should the American people have been denied that true information?”

During the chat, which took place inside the Ecuadorian embassy in London where Assange has been holed up to avoid deportation on a rape accusation he denies since June 2012, the WikiLeaks boss leveled a new accusation at the Obama administration.

He urged anyone within those agencies to “get hold of that history and protect it; because that’s something that belongs to humanity and does not belong to a political party.”

Assange’s assertion of mass document destruction may be the reason for a Tuesday tweet from WikiLeaks offering $20,000 as a “reward for information leading to the arrest or exposure of any Obama admin agent destroying significant records.”

He also challenged the claim that WikiLeaks was in league with President-elect Donald Trump and wanted him to win the election.

“We knew we were creating substantial conflict between us and the person we expected to be the next president,” said Assange, noting he believed Democratic nominee Hillary Clinton would be the likely victor based on pre-election polling. “So we understood that we were putting ourselves in a more persecuted condition by relentlessly exposing this material, increasing the risk for us. Not decreasing at all.”

Trump, meanwhile, has not outright challenged the findings in Friday's report despite having voiced skepticism before about Russia's involvement.

Reince Priebus, Trump’s incoming chief of staff, told "Fox News Sunday" he thinks the president-elect “accepts the findings” and is “not denying entities in Russia are behind these particular hackings.”