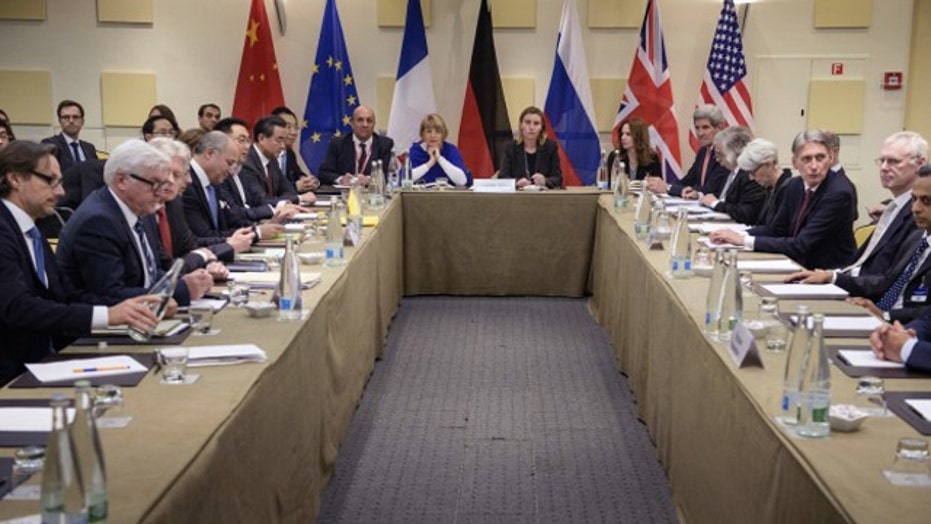 As a deadline for a nuclear deal with Iran nears, Secretary of State John Kerry met with Iranian Foreign Minister Mohammad Javad Zarif Saturday in what officials described as "at times intense" talks as part of the effort to flesh out a framework agreed in April.

The talks between the two countries focused on how to narrow differences over how to ease economic penalties on Iran and to what extent Tehran must open up military facilities to inspections.

The talks between Kerry and Zarif lasted six hours, in what officials described as the most substantive negotiating round since world powers and Iran clinched a framework pact in April. It was unclear what progress, if any, was made by Kerry and Zarif before the Iranian delegation began leaving for Iran.

People involved in the talks told The Wall Street Journal that political pressures could still delay or derail a deal as the two sides scramble to flesh out the agreement. While much of the focus has been on the Obama administration's struggles to prevent Congress from blocking a deal, diplomats told The Journal that growing political pressure in Iran now poses the more significant risk.

Asked about completing the full accord by June 30, Zarif said, "We will try."

U.S. officials provided hints of what must have been a difficult dialogue, but told The Associated Press that the encounter ultimately proved fruitful.

World powers believe they have secured Iran's acquiescence to a combination of nuclear restrictions that would fulfill their biggest goal: keeping Iran at least a year away from bomb-making capability for at least a decade. But they are less clear about how they will ensure Iran fully adheres to any agreement.

Various Iranian officials, including Ayatollah Ali Khamenei, the supreme leader, have pledged to limit access to or even block monitors from sensitive military sites and nuclear scientists suspected of previous involvement in covert nuclear weapons efforts.

“This permission will not be granted in any way. Both our enemies and those who are waiting for the decision of the Islamic Republic should know this,” Khamenei said in a recent speech.

“I think there are a number of challenges right now,” Robert Einhorn, a senior member of the U.S. negotiating team until 2013, told The Wall Street Journal. “I think especially in the light of what the [supreme] leader has been saying, there will be a temptation by the Iranians to revisit things which they have already agreed.”

The U.S. says access to military sites must be guaranteed or there will be no final deal. A report Friday by the U.N. nuclear agency declared work essentially stalled on its multiyear probe of Iran's past activities.

The Iranians are not fully satisfied, either.

The unresolved issues include the pace at which the United States and other countries will provide Iran relief from international sanctions -- Tehran's biggest demand --  and how to "snap back" punitive measures into place if the Iranians are caught cheating.

President Barack Obama has used the "snapback" mechanism as a main defense of the proposed pact from sharp criticism from Congress and some American allies.

Exactly how rapidly the sanctions on Iran's financial, oil and commercial sectors would come off in the first place lingers as a sore point between Washington and Tehran.

Speaking ahead of Kerry's talks with Zarif, senior State Department officials described Iranian transparency and access, and questions about sanctions, as the toughest matters remaining, and cited "difficult weeks" since the April 2 framework reached in Lausanne, Switzerland.

Iran insists it is solely interested in peaceful energy, medical and research purposes, though many governments around the world suspect it of harboring nuclear weapons ambitions. The U.S. estimates the Iranians are currently less than three months away from assembling enough nuclear material for a bomb if they chose to covertly develop one.