McSally: 'Radical' Sinema is out of touch with Arizona

Arizona Republican Senate candidate Martha McSally makes her case against her Democrat opponent Kyrsten Sinema in the final days of the close race.

There was a new addition to a weekend rally for the Arizona Senate campaign of Republican Rep. Martha McSally: signs that read “AZ isn’t crazy, voting Democrat is!”

“People have watched what was happening in Arizona, and been like, ‘Damn, those people are crazy,” Sinema said in a video recorded in 2011 and posted this month by The Reagan Battalion, which describes itself as a source of conservative information.

Sinema also has also been scrutinized for expressing indifference in a 2003 clip, when a radio host asserted that joining the Taliban is a “personal decision.”

“She has yet to apologize for saying it’s OK for an American to join the Taliban,” McSally told Fox News in an interview Friday in Yuma. “She has yet to explain why she told out-of-state liberal groups she thought Arizona is crazy, and the meth lab of democracy” -- a reference to a 2010 quote that Sinema said she took from Jon Stewart on "The Daily Show."

Asked for a response to McSally’s charges, a spokeswoman for the Sinema campaign directed Fox News to tweets posted Saturday about the defining issue of their campaign – health care.

“We took votes on this. I voted to preserve protections for pre-existing conditions. Martha voted to weaken them and put Arizonans’ health care at risk.  Martha and her allies can try to rewrite history, but Arizonans won’t be fooled. #AZSEN,” Sinema tweeted.

“The Democrats don’t have anything to run on, so they’re using typical fear tactics,” McSally said. “I am passionate about protecting people with pre-existing conditions and making sure insurance companies cannot deny them coverage. The intentions of ObamaCare were understandable, but their policies have failed.”

SINEMA ONCE CALLED HER STATE 'THE METH LAB OF DEMOCRACY'

Arizona’s Senate campaign also has addressed an emerging theme among Republicans nationally: the caravan of Central American migrants making their way through Mexico toward the U.S.

Pence told Fox News in an interview that “leftist groups in Honduras,” possibly bankrolled by Venezuela, are among the entities spurring the migrant caravan to leave Central America. 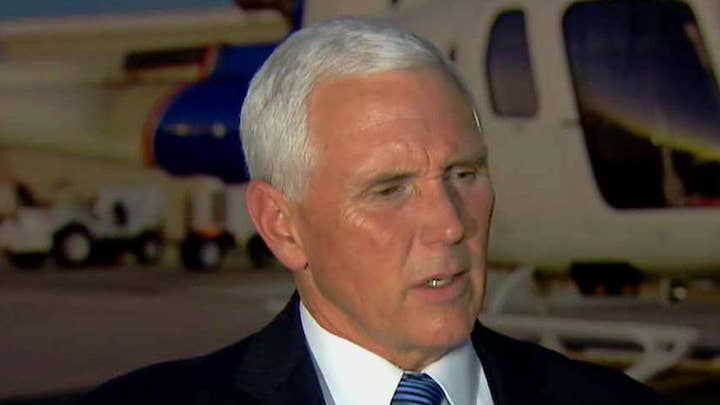 But, he also blames Democrats in Congress.

“This caravan is a reminder of a crisis in illegal immigration,” Pence said. “It is driven by laws that human traffickers actually use to entice people to make the long and dangerous journey north.”

McSally seems to welcome the new talk about illegal immigration.

“The caravan has actually put renewed focus for the country on what we deal with in Arizona every single day,” she said.