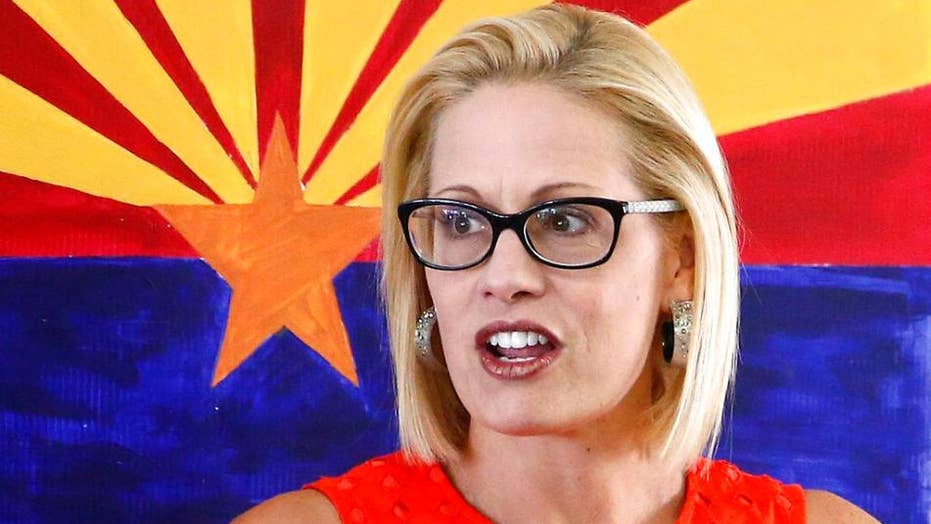 An old interview has surfaced with Arizona Senate candidate Kyrsten Sinema, in which she co-hosted a show with a conspiracy theorists who blames 9/11 on the U.S. government. Sinema separately said she didn't object to individuals going abroad and fighting for groups hostile to the U.S.

Senate candidate Kyrsten Sinema once referred to Arizona as the “meth lab of democracy” – a revelation that follows the Democrat making other past critical comments about her state.

“The states are the laboratory of democracy,” Sinema said in the speech to the liberal Netroots Nation conferencec. “And then my state – Arizona – is the clearly the meth lab of democracy.”

Sinema added that she got the line from the Comedy Central show hosted by liberal comedian Jon Stewart.

“I cannot take credit for that line,” she said. “Someone at the Daily Show wrote it, but I’m happy to steal it and use it all the time.”

Sinema and McSally are battling it out in one of the most competitive Senate races this year. The winner will fill the Senate seat vacated by the retiring Republican Jeff Flake.

The Fox News Midterm Power Rankings lists the Arizona race as a “toss-up.”

Earlier this week, it was revealed that Sinema implied that her home state produced "crazy" in a 2011 speech in which she also promised to advise liberal activists on how to "stop your state from becoming Arizona."

Some critics compared those remarks to Hillary Clinton's infamous comment about Trump supporters being "deplorables."

"Calling Arizonans crazy and having particular disdain for Republicans when she wants Republicans to vote for her is unbelievable," McSally told reporters this week. "And Arizonans need to know about it."

An edited version of Sinema's speech to the Texas Stonewall Democratic Caucus, a Democratic LGBT group in the Lone Star State, was posted on Twitter on Thursday by the Reagan Battalion, an anonymous conservative group. A longer version of the speech is available on YouTube.

Sinema, a one-time Green Party activist, has fashioned herself as a moderate willing to work with both parties in her contest against fellow

Sinema's campaign issued a response to the posting of the speech.

"She was frustrated that no one in the state legislature was standing up to out-of-state special interests working to take away health care from children, make tuition more expensive, and take job security away from working families," Sinema spokeswoman Helen Hare said in a statement Thursday. "Kyrsten was born here, and will always stand up to outside special interest groups to protect and defend Arizonans."