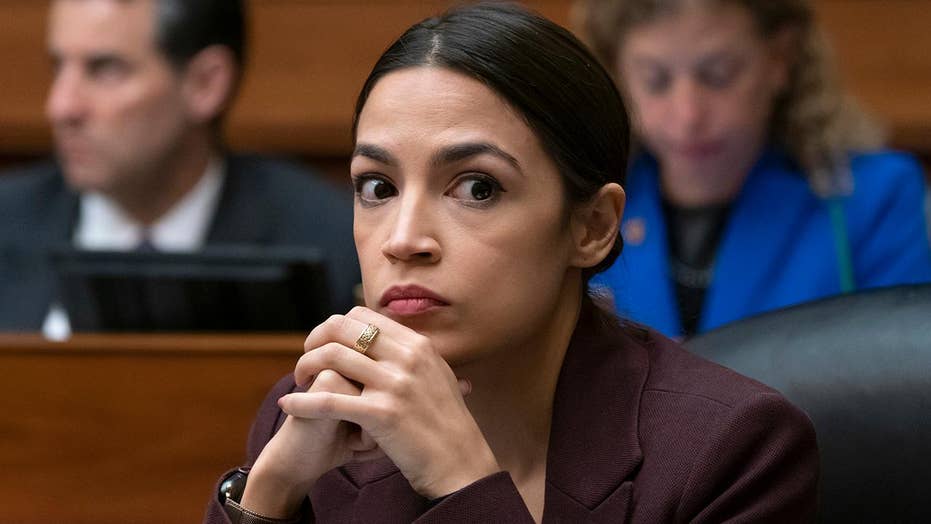 Poll: 44 percent of voters have 'unfavorable' view of Ocasio-Cortez

Rep. Alexandria Ocasio-Cortez responds claiming Republicans, Fox News 'otherize' and 'demonize' anyone who is not a white male.

The 30-second spot, obtained by Fox News and currently available on YouTube, features Michele Nix, a candidate for the North Carolina 3rd Congressional District seat in the race to replace the late Republican Rep. Walter B. Jones Jr., who died in February.

"Alexandria Ocasio-Cortez: she has the media, she has the followers, but bless her heart, she has some terrible ideas," Nix says. "Guaranteeing government jobs for some, while killing small-town jobs for others. Her 'green deal' is a bad deal for North Carolina."

More than a dozen other Republicans and several Democrats have entered the district race, with a primary set for April 30 and runoffs tentatively scheduled for July 9 if needed. The general election will either occur in July or September, depending on whether a primary runoff is necessary.

Nix's ad in the strongly Republican-leaning district offered a strong signal that upcoming congressional campaigns will take their cue from President Trump's messaging on Ocasio-Cortez, and on socialism in general. Trump has repeatedly vowed amid a humanitarian and political crisis in Venezuela that "America will never be a socialist country," and his administration has dismissed Ocasio-Cortez as a clueless politician who's in over her head.

A Gallup poll released Friday shows that Ocasio-Cortez's unfavorable rating has risen by 15 points since last September, when she had yet to win the general election, increasing from 26 percent to 41 percent of the American adults polled.

Among the possible causes: The Green New Deal resolution Ocasio-Cortez introduced earlier his year suffered a botched rollout, including the release of an official document by her office that promised economic security even for those "unwilling to work," as well as the elimination of "farting cows" and air travel. Prominent Democrats, including House Speaker Nancy Pelosi and California Sen. Dianne Feinstein, have criticized the plan.

And a newly published poll from Siena College shows that Ocasio-Cortez is seen as New York's "biggest villain" when it comes to Amazon's decision to spurn the city and abandon plans for a second headquarters in Long Island City. Ocasio-Cortez repeatedly suggested that Amazon was receiving billions in cash handouts from the city -- though it would have received tax reductions as incentive to build the headquarters. New York City's Democrat mayor, Bill de Blasio, publicly called out Ocasio-Cortez's confusion on the topic.

However, despite the blowback from top Democrats and her own constituents, the 29-year-old freshman congresswoman has also managed to increase her favorability rating, if only by seven points. About 31 percent of surveyed people view her favorably, compared to 24 percent in September, according to Gallup.

Nearly three-quarters of Republican respondents say they view her negatively, with only 5 percent having a positive view. Among the Democrats, 56 percent of respondents had a favorable view of Ocasio-Cortez, compared to only 15 percent of the Democrats polled who don’t support her.

Even some Republicans in Congress have admitted they admire Ocasio-Cortez's political acumen -- and others warn that focusing too much on her may only raise her profile.

“Laughing at Trump, as the libs did, sure stopped him from being POTUS,” right-wing activist Mike Cernovich tweeted late last year. “Laughing at AOC, as the cons are doing now, sure is hurting her.”