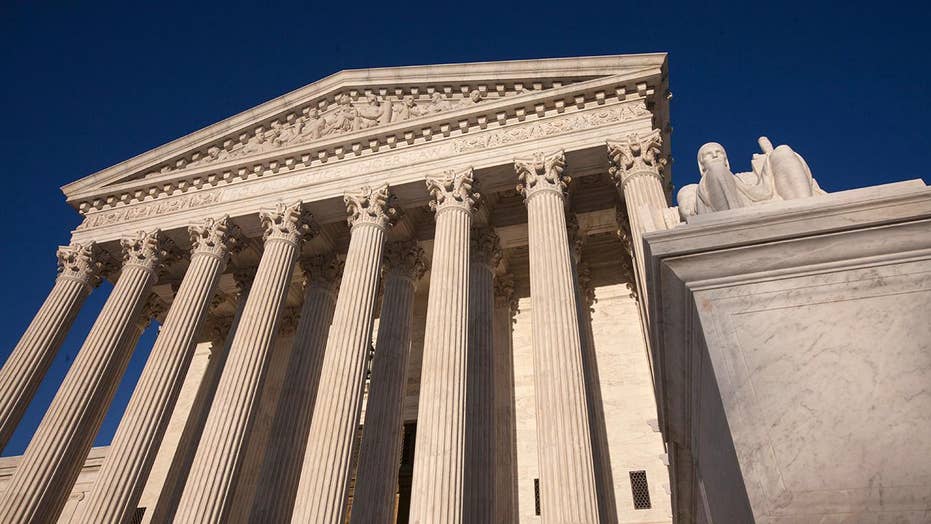 A familiar partisan divide was on display Tuesday at the Supreme Court in a case examining complaints that Wisconsin Republicans went too far in drawing electoral districts for maximum political advantage.

In a lively hour of oral arguments, the justices appeared at odds over whether the lawmakers created "extreme" legislative boundaries that benefited Republicans but were out of balance with the state's political makeup.

"It's okay to stack the decks so that for 10 years or an indefinite period of time one party, even though it gets a minority of votes, can get the majority of seats?" Justice Sonia Sotomayor asked, rhetorically.

Justice Neil Gorsuch, though, questioned whether such a court-mandated formula was possible or desirable.

The case on gerrymandering, which even brought actor-turned-politician Arnold Schwarzenegger to D.C. Tuesday in support of changes, could have far-reaching implications for elections well beyond Wisconsin.

The court is being asked to endorse a standard for redistricting that would apply nationwide. The stakes are huge: the balance of power in state legislatures and Congress could tip in coming years, particularly after the 2020 census, when voting boundaries will be redrawn based on population changes.

After having lost the White House and Congress in 2008, Republicans undertook a complex plan to win control of state legislatures around the country in the 2010 mid-terms, so they could shape congressional districts going forward. They were wildly successful, and Democrats now hope a high court ruling in their favor will help them chip away at GOP gains.

In closely divided "purple" Wisconsin, the GOP still has a 64-35 advantage in the state Assembly and a 20-13 edge in the state Senate. This, despite President Trump winning the 2016 election by a single percentage point in that swing state.

The justices have traditionally been reluctant to wade too deeply into the gerrymandering issue, with several on the bench believing it is a political issue best handled outside the courts.

"The court is ultimately going to decide, number one: is this an issue we as a court can decide and resolve, or is it something best left to the political branches?" said Thomas Dupree, a former top Bush Justice Department official.  "And number two-- if it is something we can decide, what the heck do we do?"

Former California Gov. Arnold Schwarzenegger speaks at a rally outside the U.S. Supreme Court in Washington, Tuesday, Oct. 3, 2017. The Supreme Court heard arguments in a case about political maps in Wisconsin that could affect elections across the country. (AP Photo/Manuel Balce Ceneta) (AP)

Justice Anthony Kennedy seems to be the decisive vote for any major intervention, with court watchers citing a 2004 concurrence. Kennedy said he "would not foreclose all possibility of judicial relief if some limited and precise rationale were found to correct an established violation of the Constitution in some redistricting cases."

In Tuesday's oral arguments, Kennedy appeared open to the idea of this court getting involved. He repeatedly pressed lawyers representing Wisconsin to answer whether a constitutional violation was at issue, and what remedy was preferred.

Other members of the court were more vocally skeptical of the Wisconsin state plan.

"What's really behind all of this? The precious right to vote, if you can stack a legislature in this way, what incentive is there for a voter to exercise his vote?" said Justice Ruth Bader Ginsburg. "Whether it's a Democratic district or a Republican district, the result, using this map, is preordained in most of the districts."

The increasing use of computer technology to create these maps has created competing analytical models that rely on such wonky metrics as "sensitivity testing" and "efficiency gaps." Chief Justice John Roberts and Justice Stephen Breyer both jokingly called it "gobbledygook," but the justices are being asked to embrace some kind of social science statistical model going forward.

"You know there is something wrong with the system, and they will not fix it, the politicians," he said. "Both parties do the same thing ... I say 'hasta la vista' to gerrymandering," he added, quoting his famous movie line.

Misha Tseytlin, the state solicitor general in Wisconsin, called claims of politics gone amok to be "scare tactics not borne out by the data," and said legislators in his state acted within the law.

Justice Samuel Alito called gerrymandering "distasteful," but added, "if we're going to impose a standard on the courts it's going to have to be manageable."

Roberts worried what would happen if the high court gets involved in a every gerrymandering dispute.

"We'll have to decide in every case whether the Democrats win or the Republicans win," said Roberts. "That is going to cause very serious harm to the status and integrity of the decisions of this court in the eyes of the country."

More than three-dozen states rely on the state legislature to redraw boundaries. Other states such as California rely on an independent commission to create what supporters say would be less extreme districts. Two years ago, Kennedy was the deciding vote in a ruling allowing Arizona voters to take put the process into such a commission.

Federal courts are deciding whether Maryland's Democrat-crafted maps go too far, and similar lawsuits challenge the GOP-controlled version in North Carolina and Pennsylvania.