Alaska, prepare for some serious nitpicking.

Election monitors from the campaigns of dueling Senate candidates Lisa Murkowski and Joe Miller have started to converge on sites across the state where officials are reviewing the results of last week's undecided Republican primary contest.

As of this past weekend, Miller was leading by 1,668 votes. State officials start counting the more than 23,000 absentee and provisional ballots Tuesday and expect to be finished by next Wednesday -- from there, they hope to have the election certified on Sept. 17.

But between now and then, the campaigns are watching closely for irregularities in the count and basically anything that might give their opponent an unfair edge. The drama all leads to a decision, from whichever campaign ends up behind, on whether it's worth it to pursue a recount. At stake is yet another incumbent's clutch to power in the face of a Tea Party-driven backlash.

The extra sets of eyes come amid early accusations of election shenanigans.

Miller, the Tea Party-backed candidate trying to unseat the incumbent Murkowski, complained that the National Republican Senatorial Committee had sent lawyers to Alaska in a possible bid to "skew the results."

Miller now reportedly says the NRSC has assured him it is not taking sides.

Murkowski campaign spokesman Steve Wackowski confirmed that the NRSC had offered the senator's campaign "legal advice" on how to proceed, but said the representatives have left Alaska and dismissed Miller's accusations.

Miller on Monday renewed accusations of campaign irregularities as the Alaska Division of Elections prepared to count absentee and questioned ballots in the tight primary race. Miller said he remains concerned with how Murkowski campaign workers have contacted voters.

"The concern that I have stated before is the concern of contacting absentee voters — finding out how they voted — and then just making knee-jerk challenges to those ballots in an effort to, obviously, having more of the Joe Miller votes thrown out on technicalities," Miller told the Associated Press.

The Murkowski camp disputes those accusations.

"I think there's a lot of paranoid accusations from Miller and his camp," Wackowski said.

He described the counting process as "harmonious" and said Murkowski's observers are just trying to ensure an accurate election.

"We have a close primary here," he said. "We want to make sure that there's a fair count."

If politicos are waiting for the frontier version of Bush versus Gore, it probably won't happen for several weeks.

Fenumiai said the election monitors have raised some objections to decisions made during an initial ballot review but that they've all been waived. Fenumiai said the monitors will not be able to challenge during the counting process that begins Tuesday.

But the campaigns -- and their attorneys -- will have the opportunity to call for a recount after the vote is certified. The recount itself is generally a tedious process where campaigns can challenge ballots over the way they're filled out and other contentions. The process draws out even more if the campaigns go to court to challenge the state, as was the case in the disputed Minnesota Senate election in which Al Franken was ultimately declared the winner over former Norm Coleman.

In Alaska, if the race is a tie, the recount is automatic. If the candidates' vote tallies are within .5 percent of each other, then the state will pay for a recount, though somebody has to request one.

If the tallies are more than .5 percent apart, the campaigns can still request a recount -- the catch is they have to finance it, at a cost of about $15,000.

The Murkowski campaign had no comment on whether it would pursue a recount if the final tally is in Miller's favor. Wackowski, though, noted a recent analysis by the Juneau Empire that showed Murkowski could pull from behind as the absentees are counted.

The Empire reported that Murkowski was leading Miller among early voters by nearly 8 points - if the absentee votes keep to that trend, Miller could start to see his lead erode.

That's no doubt good news for Murkowski, as her chances for a third-party bid just got a little dimmer on Monday.

Alaska's Libertarian Party has officially said no to any possibility of Murkowski joining its ticket in the fall elections. Party Vice Chairman Harley Brown told Fox News the party's five-member board discussed the senator on Sunday -- as a courtesy -- after an unknown person raised the prospects of a Murkowski Libertarian Party ticket run should she lose the GOP primary.

"We just knew right off the bat" she would not sign onto the Libertarian Party pledge to abide by the party's principles of "personal freedoms and liberties for your home and business," Brown said. "She's just not a Libertarian."

FoxNews.com's Judson Berger and Fox News' Trish Turner and the Associated Press contributed to this report. 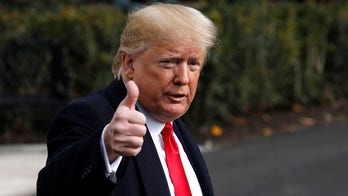