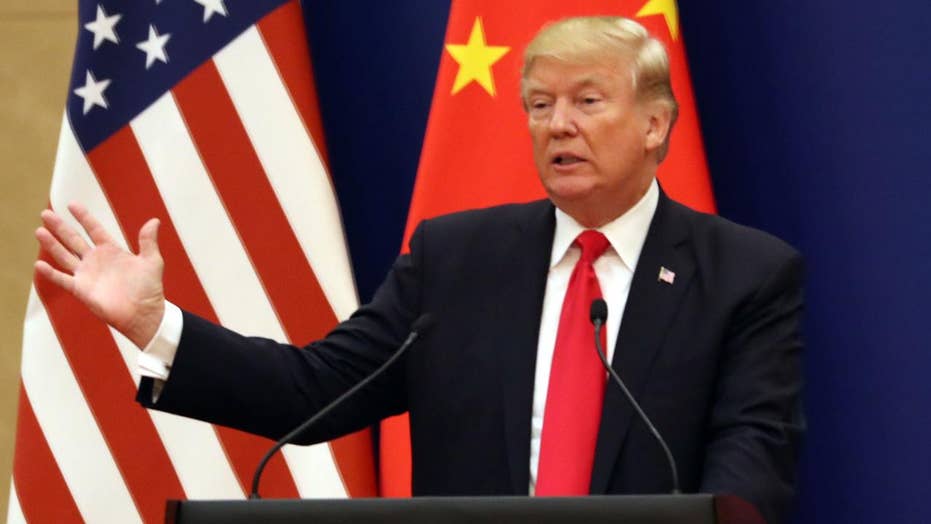 It shouldn’t be surprising that President Trump said in China this week that when it comes to the trade deficit between the U.S. and China, “who can blame a country for being able to take advantage of another country for benefit of their citizens? I give China great credit."

But anyone who thinks this comment represents a softening of the president’s commitment to renegotiating trade deals so they better reflect American interests better think again.

President Trump sees in China a nation that has used trade to dramatically increase its wealth and place in the world, taking advantage of past U.S. acquiescence to Chinese trading practices.

This is why President Trump turned his rhetorical guns away from the Chinese government and toward the practices of former presidents George W. Bush and Barack Obama, which allowed Beijing to run roughshod over U.S. interests.

The president will have the opportunity to take some immediate action on the trade enforcement front when he returns home from his Asia trip. He will need to deal with a unanimous decision by the United States International Trade Commission that found the free trade agreement between the U.S. and South Korea has been violated repeatedly by South Korean washing machine manufacturers Samsung and LG.

Whirlpool CEO, Jeff M. Fettig called the U.S. International Trade Commission’s decision “a win for American manufacturers and American workers.” He added: “For the third time since 2013, the ITC has found that Samsung and LG engaged in unlawful conduct by violating U.S. trade laws. This vote sets the stage for the administration to put in place an effective remedy to create a level playing field for American workers and manufacturers. This type of corrective action will create U.S. manufacturing jobs.”

The U.S. International Trade Commission will make an official recommendation to President Trump in December on what action to take regarding the South Korean companies.

According to the commission’s website: “The Commission may recommend to the President an increase in a duty, imposition of a quota, imposition of a tariff-rate quota … trade adjustment assistance, or any combination of such actions. In addition, the Commission may also recommend that the President initiate international negotiations to address the underlying cause of the increase in imports or that he implement any other action authorized under the law that is likely to facilitate positive adjustment to import competition.”

The effect of the Samsung and LG washing machine dumping has been a dramatic increase in the share of the U.S. washing machine market going to the two companies that can be attributed to their illegal actions.

A retail and consumer market-share survey run by the Stevenson Company found that from mid-2008 to mid-2017, Samsung’s U.S. market-share jumped from an almost insignificant 1.7 percent to nearly 20 percent of the entire U.S. washing machine market. LG, for its part, experienced around a 30 percent gain to just over 16 percent of market-share.

The net result of the two South Korean companies dumping assault on U.S. markets has been that they have gone from having about 14 percent market-share to a 36 percent share.

This dramatic increase demonstrates that the concerted strategy by Samsung and LG to willfully violate the trade laws agreed to by the United States and South Korea has paid handsome dividends.

Now that both companies have established a significant U.S. foothold for their washing machines, Samsung and LG are planning on opening manufacturing plants in South Carolina and Tennessee, respectively, in an attempt to hold onto and expand their gains.

This wrinkle is why the decision by the U.S. International Trade Commission last month against the South Korean companies sets the stage for a major test of the Trump administration’s resolve in enforcing trade deals.

If Samsung and LG are allowed to substantially benefit from a long pattern of dumping at a loss into the U.S. market after getting caught with their hands in the cookie jar for the third time, it will send an unmistakable signal around the world that – all the rhetoric aside – it is foolish to follow trade rules that don’t suit your purposes.

On the surface, it may seem like the upcoming White House decision on the Samsung, LG trade case is about washing machines. But it is really about the integrity of every current and future U.S. trade deal.

Before the first anniversary of his entering office, President Trump should make it clear to the world that cheaters do not prosper.