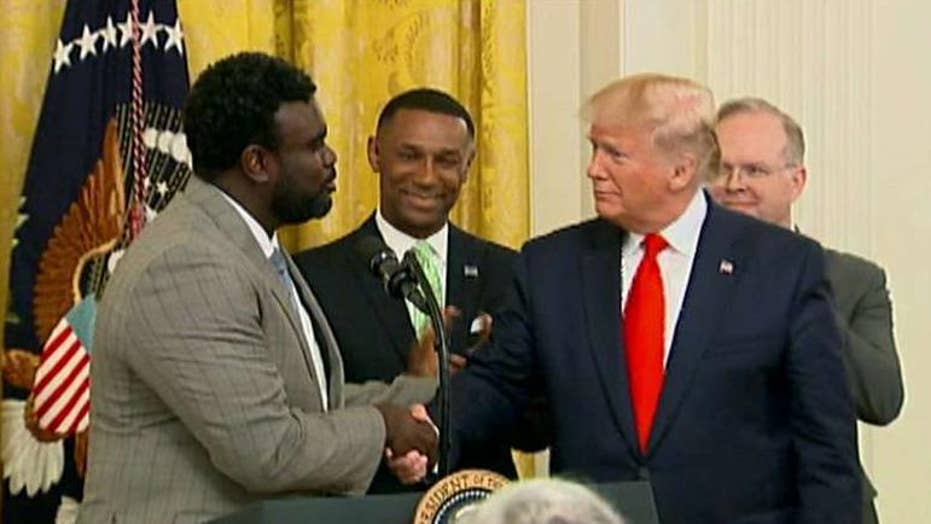 After being invited to speak at the White House, Marcus Bullock opens up on his inspiring story and how he's helping inmates have better lives.

It’s hard to believe that just one year ago, a bipartisan movement many years in the making to improve public safety and restore second chances came to fruition with the passage of the First Step Act.

Not only did this moment represent the culmination of an unprecedented years-long groundswell for reform, but it was also the beginning of the next step – a model for future proposals and unlikely partnerships that have the potential to transform millions of lives.

As President Trump signed the law in the Oval Office last December, many returned citizens in attendance wept with joy, testifying to its life-changing power. It gave voice to the voiceless and offered redemption to thousands of people. We need more moments like this.

ALICE MARIE JOHNSON: I WAS SENTENCED TO LIFE IN PRISON – HERE'S WHY I NEVER LOST HOPE

Both of us have experienced the criminal justice system up close. One of us was sentenced to life plus 25 years in prison for a first-time nonviolent offense and served over two decades behind bars. Without a presidential act of clemency that changed the course of our country, there would have been no hope for Alice. Her story opened the eyes of millions to the sad reality that many low-level offenders often receive the equivalent of a death sentence.

Before working full-time as a lawyer, one of us worked as a prison guard in Worcester, Mass., seeing familiar faces from school and the community who made poor decisions and didn’t have a strong support system.

We have come a long way since that time – the “tough-on-crime” approach of the 1980s and 1990s that did little to improve safety but much to foment mistrust and misunderstanding between law enforcement and communities – perpetuating a negative cycle of crime and recidivism that tore apart families and devastated communities.

The good news is that, as we have seen in the last few years, momentum for action has accelerated.  The pursuit of criminal justice reform has done what some might have thought unthinkable in this bitter political environment. Only this could bring together the likes of Snoop Dogg with Donald Trump, Democratic Sen. Cory Booker with Republican Sen. Mike Lee, Kim Kardashian West with a grandmother from Tennessee serving a life sentence for a first-time nonviolent offense, and thousands of families in communities across the United States.

In the last 12 months, more than 4,000 individuals have rejoined their communities thanks to the First Step Act, and more than 1,600 who were not part of the Fair Sentencing Act of 2010 have had their federal prison sentences reduced.

More than 600,000 people return home and rejoin their communities each year. They face a myriad of challenges, from acquiring proper identification to finding a job to securing housing and building a supportive network of family, friends and community partners.

They are people like Matthew Charles, one of the first individuals released thanks to the legislation, as well as Edward Douglas, sentenced to life on a nonviolent drug change. During their time in prison, they learned new skills and mentored others. They are public voices for others who are benefiting from the legislation’s rehabilitative programming, modified mandatory minimum laws, and more proportional sentencing. They are testimonials to the old adage that society should never place a period where God has placed a comma.

More than 600,000 people return home and rejoin their communities each year. They face a myriad of challenges, from acquiring proper identification to finding a job to securing housing and building a supportive network of family, friends and community partners.

We need people in our communities, in groups such as Americans for Prosperity, Cut50, the American Civil Liberties Union, and Prison Fellowship, to unite over where they can make a difference, not on their differences. That is why we are both working with Stand Together to unite with anyone who seeks to improve our justice system.

We also need partners in business to help individuals take the next step as productive members of society. Across the nation, companies like Koch Industries, Butterball, Uber and others have partnered with the Society for Human Resource Management (SHRM) on the Getting Talent Back to Work initiative, which aims to help businesses recruit, train and hire qualified applicants who might not otherwise get an opportunity with a record.

According to research released by the Charles Koch Institute and SHRM, 74 percent of managers and 84 percent of human resource professionals nationwide said they were willing or open to hiring individuals with a criminal record.

Consumers are equally drawn to the idea, with 78 percent of customers responding that they will buy goods or services from businesses where a customer-facing employee has a criminal record.

Criminal justice reforms like the First Step Act have enhanced public safety and reduced crime and recidivism across the country. Look at Pennsylvania and Utah, where lawmakers recently enacted clean slate legislation that has enabled millions of eligible people to have their records expunged. Other states are considering similar proposals, with the potential to open opportunities for millions more.

States that have implemented data-driven prison and sentencing reforms, from Michigan to Georgia to South Carolina to Texas and beyond, have reduced crime while giving people opportunities to improve their lives and their communities. In the Lone Star State alone, crime rates have dropped to some of their lowest since the 1960s while saving taxpayers $3 billion.

They may have come for the savings, but they’re staying for the salvation. Together, we can take the next step, and we must.

Alice Marie Johnson was convicted for nonviolent drug trafficking in Memphis, Tennessee. After serving 21 years, her life sentence was commuted by President Donald Trump, with the help of Kim Kardashian West. An ordained minister, mother, and great-grandmother, she looks forward to sharing her inspirational story and the faith that helped her through it. Her book, "After Life: My Journey from Incarceration to Freedom" is available now.