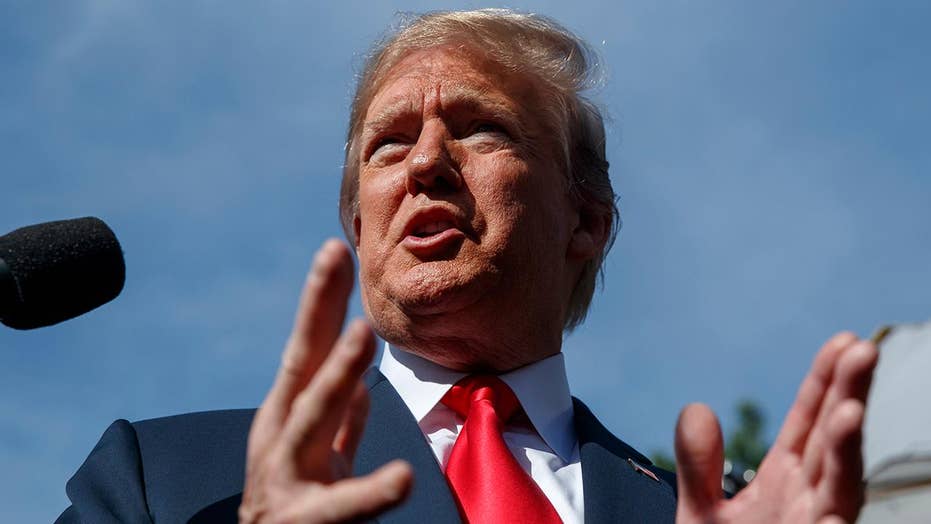 Nearly two-thirds of all Americans “feel exhausted by the news,” according to a new Pew Research Center study. After this past week, who could blame them?

The fallout from the G-7 summit in Canada, the summit between President Trump and North Korean dictator Kim Jong Un in Singapore, battles on immigration, and the report by the Justice Department inspector general of FBI conduct in the Hillary Clinton email investigation were just a few of the big stories of the week.

Toss in a temper tantrum by CNN staffers in the White House press room. Add in an F-bomb-tossing celebrity and it was an ideal birthday week for a president who wars with the media. President Trump turned 72 on Thursday.

The week was capped off by the Justice Department IG report about possible political bias at the FBI. It’s doubtful anyone in official Washington thought the IG would say there was bias. That would have set off more fireworks than D.C. sees on the nation’s birthday. It still came close, despite the protestations of many in the media.

Even The Washington Post wrote that the report “castigated former FBI director James B. Comey” “and found that other senior bureau officials showed a ‘willingness to take official action’ to prevent Donald Trump from becoming president.” The paper added this would all help Trump’s narrative and that “the report provides chapter upon chapter of fresh ammunition for his attacks on the FBI.”

The Post’s editorial board declared: “It is not the report President Trump wanted. But there is enough in it for him and his allies to twist and cherry-pick that its actual findings are likely to be lost in partisan noise.”

The New York Times editorial board called the report “something of a dud.”

Then there were the hot tweets, like this one from NBC News Political Director Chuck Todd, complete with similar wording as the Post: “The cherry picking of this report is likely to only compound the credibility damage for the FBI and DOJ, even as the report itself, taken in full, is a good faith attempt to restore credibility. But political agendas are going to prevent some from providing FULL context. #sad.” Note, also, the mocking use of the Trump signature term, “sad” at the end.

Esquire’s Charles P. Pierce was already opining before he even finished reading the report, admitting: “I’ve only read a chunk of it at this point,” but declaring it an “honest report.” Then he claimed “the executive branch is lying its a-- off about the report.”

Or there’s this tweet by CNBC Editor at Large John Harwood, commenting on a Trump tweet: “Justice IG report found no evidence that Strzok’s disdain for Trump or any other improper consideration affected conduct of Clinton email investigation,” Harwood wrote.

Only Harwood was trumped by CNN Justice Reporter Laura Jarrett, who tweeted that he was wrong. “Here's the problem - it's messy. While the IG found no evidence that bias affected the *specific* investigative actions reviewed pre-July 2016, he *does not* have confidence that the delay in reviewing the Weiner laptop emails was ‘free from bias.’”

2. Friends with Benefits: One item from the IG report deserves special note because it directly involves journalists. “The IG expressed ‘profound concerns about the volume and extent of unauthorized media contacts by FBI personnel that we have uncovered our review,’” wrote The Daily Caller’s Joe Simonson.

He said the report “identified numerous FBI employees, at all levels of the organization and with no official reason to be in contact with the media, who were nevertheless in frequent contact with reporters.”

So how did journalists work the FBI? The perked FBI staffers ended up “improperly receiving benefits from reporters, including tickets to sporting events, golfing outings, drinks and meals, and admittance to nonpublic social events.”

Federalist Senior Editor Mollie Hemingway posted a graphic showing the connections between one reporter and so many FBI sources that it looked like a Ferris wheel.

Some in the media went all out. Forget peace, they wanted a religious war. Over on MSNBC, the theme was that the GOP had turned into a cult.

“Hardball” host Chris Matthews teased: “Anyway, the Republican Party becoming more like a cult than a political party? Boy, that’s hard news for the Republicans. You’re in a cult. This is Jonestown?”

Matthews compared the GOP to a cult that killed more than 900 people in "revolutionary suicide" and also murdered Rep. Leo J. Ryan.

Perhaps Matthews was watching his own network. “Morning Joe” host Joe Scarborough was only slightly less insane with his “cult” comment. “Primary voters in the Republican Party have devolved into a Trumpist cult,” he whined.

Leading up to the summit, CBS Correspondent Bianna Golodryga criticized Trump, saying “the self-proclaimed dealmaker-in-chief has so far proven to be more of a deal-breaker.”

Speaking of history, that’s a big part of what’s wrong with all this reporting and commentary. It’s inconsistent with past presidential outreach to dictators.

Take CNN Chief National Security Correspondent Jim Sciutto. Sciutto tweeted a blast at Trump for meeting with North Korea. “.@realDonaldTrump is smiling next to a man who runs a gulag jailing some 200,000 North Koreans and who oversaw the sinking of a South Korean Navy ship killing 46 & the hacking of Sony North America,” he wrote.

Only The Washington Examiner’s Becket Adams noticed a wee bit of inconsistency in Sciutto’s approach to bad guys. When Sciutto worked for Obama’s State Department, he took a more positive note of friendship. “Recall that in 2014, as Obama restored the U.S.' formal relations with Cuba, Sciutto’s tone was decidedly different. Reverential, even,” wrote Adams. Here’s that tweet from 2014. “The call that changed half a century of division: POTUS speaking with #Cuba Pres. Raul Castro yesterday.”

You might say, Sciutto is only technically a former Obama staffer.

4. Get Him a Bar of Soap: Star actor and liberal loon Robert De Niro kicked off the week with four letters the left loves. DeNiro was a presenter at the “72nd Annual Tony Awards” on CBS and he F-bombed. “I’m gonna say one thing, f--- Trump!" and “It’s no longer ‘Down With Trump,’ it’s ‘F--- Trump.'”

No, it’s not a surprise that those in the entertainment industry hate Trump. That much was obvious from the standing ovation and the support from celebs like Mark Hamill, Kathy Griffin and Rosie O’Donnell that he received.

What is surprising is how even MSNBCer Scarborough gets it and the Hollywood left doesn’t. Here’s Joe warning them: “People that applauded De Niro's statement last night don't understand that they are helping Donald Trump's re-election every time they do something like that, they don't understand.”

Blow out the candles, Mr. President. Thanks to the left, this birthday was lit.