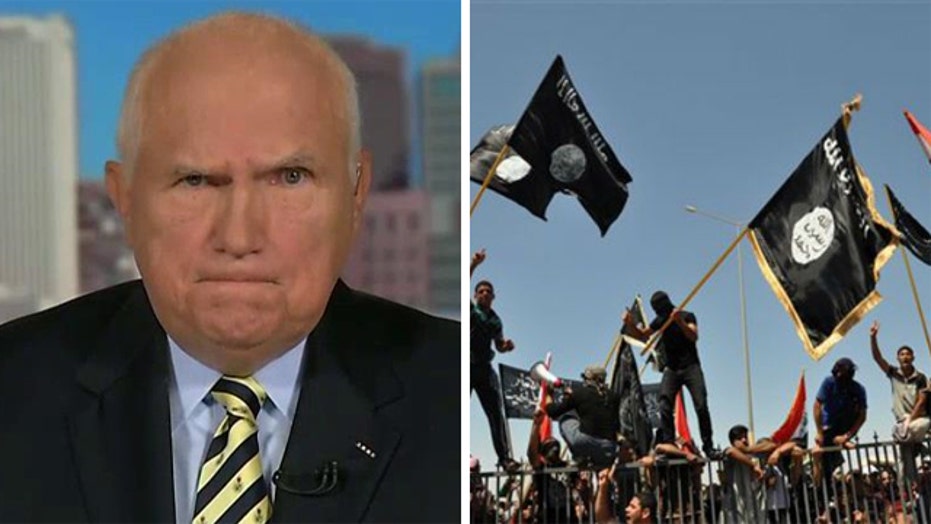 Maj. Gen. Bob Scales on setbacks in the fight against ISIS

U.S. continues with strategy in Syria

During his news conference in Turkey on Monday, President Obama was criticized by the press for not doing enough to end the scourge of ISIS. In his reply he challenged his critics to offer a better solution.

Well, I thought I would take up his challenge.

As distasteful as it seems now, the United States will likely be compelled to escalate our war with ISIS by destroying them on the ground. As the ISIS horror increases, civilized nations will have no choice but to join together in a coalition to defeat them. Such a campaign will likely commence after Obama leaves office – or before, should ISIS execute a spectacular and bloody attack against the homeland in the next 15 months.

If we are driven to destroy ISIS, how might such a campaign be executed? What follows are some thoughts I gleaned from discussions with several of my uniformed colleagues. They describe a campaign that exploits Western superiority in technology and materiel and takes advantage of the intrinsic weaknesses of this diabolical enemy.

As distasteful as it seems now, the United States will likely be compelled to escalate our war with ISIS by destroying them on the ground. As the ISIS horror increases, civilized nations will have no choice but to join together in a coalition to defeat them.

First, the United States would be expected to build and lead a coalition of affected militaries that would include some NATO partners, such as Turkey, Britain and a few Eastern European armies. France would surely join. Coalition partnerships would likely include a host of Sunni military forces from Egypt, Jordan, Saudi Arabia and perhaps some Gulf states.

In Iraq and Afghanistan we learned the painful lesson that disaster attends a campaign that has no achievable end. Unlike Al Qaeda, ISIS relies on territory for its legitimacy. Its vulnerable geographical “center of gravity” is Raqqa, its capital in northern Syria. ISIS without Raqqa would be like Islam without Mecca or Catholicism without the Vatican. Denied its theological and ideological heartland, ISIS would become a criminal enterprise, rather than a state.

We also learned after the “March to Baghdad” in 2003 that initial successes without a plan for sustaining victory lead to long-term defeat. Therefore, ISIS must be denied a return to Raqqa. Perhaps the capture of the city might be sustained by establishing a joint Islamic “Kommandatura” that would hold and govern Raqqa, much as the Allies governed Berlin after World War II.

The conquest of Raqqa would begin with a massive air campaign, the objective of which would be to make the city virtually uninhabitable. Aerial strikes by fighters, AC-130 gunships, Apache helicopters and drones would turn off the lights, destroy sources of food and water, collapse bridges, crater roads and eliminate every electronic portal ISIS has to the outside world.

A heavy coalition force of tanks, infantry carriers, artillery and rocket launchers would then march the 50 miles from the border city of Tel Abyad to the outskirts of Raqqa to establish a loose cordon around the city. Our military frequently used cordon operations in places like Sadr City and Ramadi in Iraq. The challenge of maintaining the cordon would be eased by a defensive line along the Euphrates River, which forms a natural moat across the southern third of Raqqa.

The total force needed to strangle the city would be modest, about 25,000 troops from all coalition partners. The U.S. might contribute a Special Forces Group, elements from Joint Special Operations Command (Delta, SEALS and Rangers) and at least two armored brigades. Our total share, with supporting units, would be about 10,000.

Once Raqqa was sealed, the coalition would allow civilians to escape to temporary sanctuary camps outside the cordon. ISIS would seek to draw the coalition into an apocalyptic street-by-street battle, where the odds would be more in their favor, but the coalition would remain patient and rely on strikes from overhead drones.

In time, perhaps weeks or even months, resistance inside the city would collapse. At that point we and our Western partners would depart. ISIS would try to scatter, only to be hunted down in the desert by Sunni Arab forces.

Would the capture of Raqqa end the ISIS scourge? Probably. Without a capital, ISIS could not claim to be a caliphate. Raqqa would no longer be a magnet for young jihadists.

In time, it might well become the capital of a newly formed Sunni state, part of a permanently divided Syria.

A Sunni homeland free of Assad’s brutality and ISIS’ inhumanity might well stand a chance of becoming a stable safe harbor for Sunni Arabs to live in peace with their Shiite and Alawite neighbors.

But none of this can happen until ISIS is destroyed. And after more than a year of failed effort, it is clear that ISIS can be destroyed only on the ground.