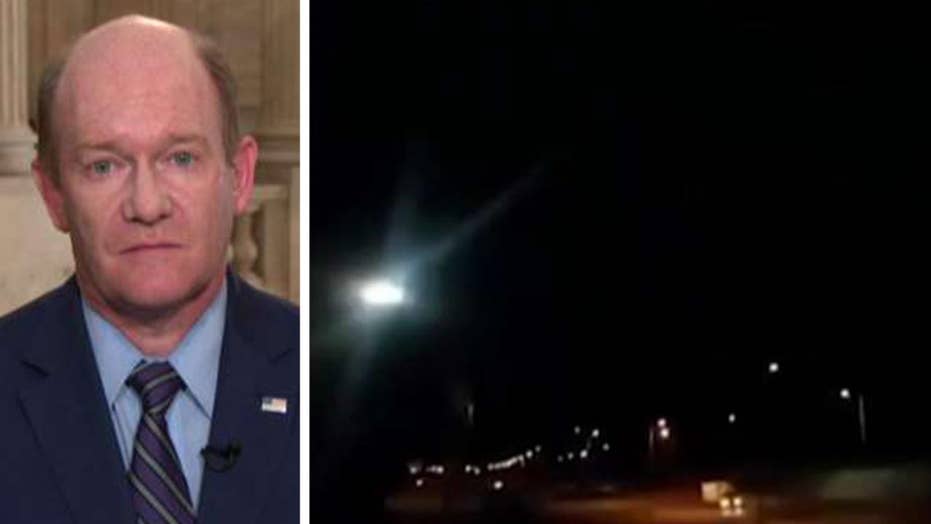 Sen. Chris Coons, D-Del., appeared on "The Story with Martha MacCallum" Tuesday and reacted to reports that Iran had launched "more than a dozen ballistic missiles" targeting U.S. and coalition forces in Iraq.

"My concern, Martha, frankly, is that Iran may well take this one action tonight and then lay low for months and then surprise us in another theater around the world or here at home," Coons said. "We're gonna have to have a clear strategy for how to engage our allies, how to put pressure on Iran and how to deter future attacks."

The missiles targeted military bases in Al-Assad and Erbil, the Pentagon added. A U.S. government source told Fox News that the missiles appeared to have little impact and there were no reports of American casualties.

Coons added that the most important thing following the Iranian escalation was for the Trump administration and Congress to work together and "come up with a stronger and clearer strategy for the region."

The senator made it clear he did not mourn the passing of Qassem Soleimani, the Iranian general whose death sparked Iran's missile launch, but he did criticize the president's choice to order the airstrike.

"He was a person responsible for the deaths of hundreds of American servicemen over the years. But this was a dramatically escalatory step," Coons said. "And now I think we need to make sure there is a coherent strategy for how we're going to move forward."

"I hope that there has been a thorough plan put together about what the next steps will be because a strong, forceful Iranian response throughout the region was, I think, entirely predictable," Coons said.