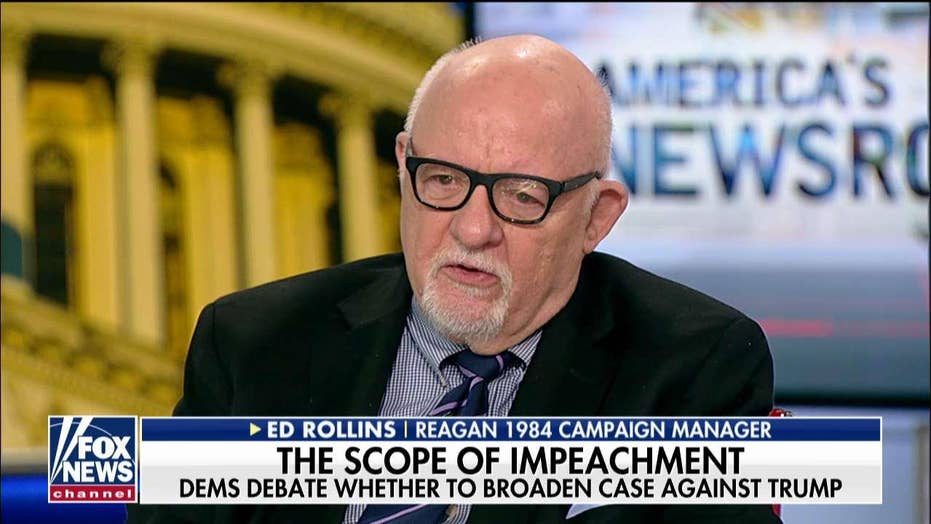 Ed Rollins on impeachment push: 'It's just not there' for Democrats

Former Reagan-Bush campaign manager Ed Rollins told “America’s Newsroom” on Thursday that House Speaker Nancy Pelosi is calling for articles of impeachment despite there being “no crime proven."

“This is an absurd process and impeachment is a very important thing,” Rollins said, weighing in on Pelosi’s move toward articles of impeachment.

He explained that other than "absolute racist" Andrew Johnson, impeachment cases against American presidents have included a crime.

REP. BIGGS RIPS PELOSI'S IMPEACHMENT ANNOUNCEMENT: 'SHE IS FLAT-OUT NOT TELLING THE TRUTH'

“I was part of the Nixon team. There was a crime there — a burglary, a break-in and a cover-up. In the case of Bill Clinton, there was lying under oath. There is no crime proven here," he said, scoffing at the idea by legal scholars and Democrats that Trump committed bribery on his call to the president of Ukraine.

"This is not bribery, no matter how much you want to argue it. It’s just not there.”

Pelosi claimed the facts are now "uncontested" that Trump "abused his power for his own personal political benefit at the expense of our national security" by allegedly using financial aid as leverage to seek an investigation of the Bidens from Ukraine. The records demonstrate that Trump sought that investigation, but Trump maintains there was no quid pro quo for aid and witnesses have not directly linked him to one.

An op-ed authored by Rollins was published on Wednesday, denouncing the House Democrats' impeachment inquiry:

"So reads the Democrat’s charade of an impeachment 'report,' suggesting President Trump’s attempts to expose corruption in Ukraine were somehow politically motivated. The report’s author, Rep. Adam Schiff, D-Calif., went on to describe the president as “unbound” and “unaccountable” — because Schiff is a model of even-keeled temperament. He and other Democrats formally adopted the report a party-line vote, leading up to today’s impeachment hearing in the House Judiciary Committee."

"Don’t be fooled: Schiff’s impeachment charade is exactly that, and it’s incompatible with the long and esteemed history of the United States Congress."