"Wow, he was triggered, wasn't he?" Crenshaw said Thursday on "The Ingtraham Angle." "That is the definition of a leftist getting triggered. Doesn't like what he's hearing, doesn't agree with it, doesn't understand foreign policy. ... He clearly doesn't know much and when you don't know much about foreign policy, you get really mad when people disagree with you. And if you can't argue your point, you tend to insult people."

"That is the definition of a leftist getting triggered. Doesn't like what he's hearing, doesn't agree with it. ... He clearly doesn't know much."

The former Navy SEAL went on to call Piker a "perfect example" of the "outrage culture," but said it was "good on him" for later trying to walk back his comments. He also knocked the liberal commentator for saying that "America deserved 9/11," pointing to "a deep anti-Americanism" in left-wing politics.

"When you say 'America deserved 9/11,' you know, he's trying to say 'Well, that's not what I meant... it was our fault though.' OK, so not a big difference," Crenshaw told Fox News host Laura Ingraham.  "But he doesn't understand history. He doesn't understand foreign policy, so he can't actually make an argument and connect those two things. And then he basically says that the only reason I'm making the argument is because I lost my eye? It doesn't make any sense. ... It's so ridiculous." 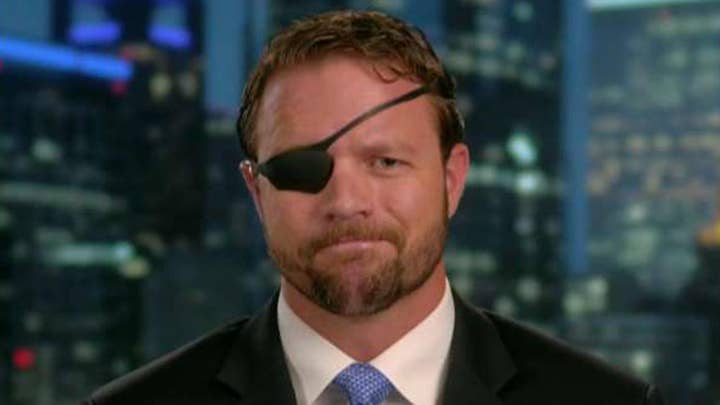 He continued, "They're triggered constantly. If these small things get them so riled up, you know, imagine [what] another win in 2020 will do when Trump wins -- and I hope he does. Let's watch the meltdown then. But this kind of stuff has to stop. We have to be able to have nuanced conversations."

"If these small things get them so riled up ... imagine [what] another win in 2020 will do when Trump wins -- and I hope he does. Let's watch the meltdown then."

Crenshaw went on to blast YouTube TV for allowing the "highly radical" commentators of "The Young Turks" to have a platform.

During a Twitch livestream on Tuesday night, Piker blasted Crenshaw for his continued opposition to a House plan to block sending arms to Saudi Arabia.

Piker clarified his remarks on Thursday, calling them "satire," but refrained from apologizing to Crenshaw.

"Service does not guarantee respect. It should not," Piker said. "This is the exact same kind of sentiment that leads to the militant attitude that the United States has. If you have served and on top of that are using that service to continue sending loads of men and women overseas to die or to come back home and fail to reintegrate into society just exclusively for the profits of the military-industrial complex, then no, you don't deserve respect by virtue of service."