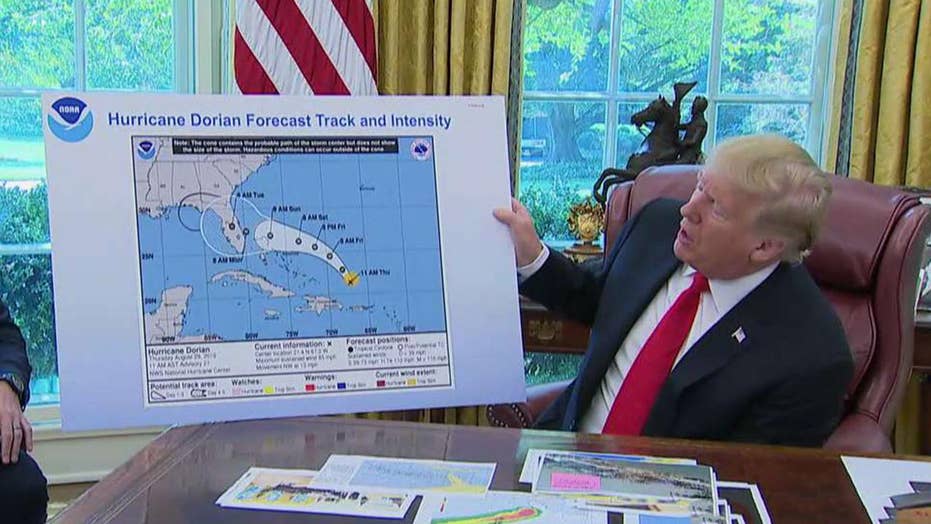 CNN anchor Don Lemon offered a passionate defense of what he had referred to as "Sharpiegate," the controversy of the Hurricane Dorian map President Trump presented in the White House that included a marking near Alabama on a map of the storm's projected path.

Trump has been criticized for tweeting Sunday morning that Alabama was among the states expected to be affected by the hurricane. Forecasts at the time from the National Weather Service, however, projected that the state would be spared.

The president has since doubled down both on Twitter and in the White House, where he had a map displayed showing the trajectory of Dorian with an extension drawn with a black Sharpie so that it included a portion of Alabama.

On CNN, Lemon defended the heightened attention the controversy has gotten.

"You know, I hear the president's apologists saying, 'Oh, it's petty. You shouldn't be focusing on it.' No, this is a news story," Lemon began. "This is the president of the United States and if you can't trust what's coming out of the president of the United States' mouth, then where are we? Who are we, especially as journalists? Why wouldn't we cover that? You're supposed to be able to trust the president. ... Accurate information should be coming from the highest office in the land instead of doubling down on what, quite frankly, is not the truth."

Lemon's colleague Chris Cuomo piled on the president, insisting the "bar" for credibility from the White House is low and that Trump has "put himself first" over all other considerations as he performs his duties.

Cuomo then blasted White House press secretary Stephanie Grisham for going after CNN over a botched graphic in which the network mislabeled Alabama as "Mississippi."

Cuomo said there was "irony" in Grisham pointing out a CNN flub when her boss is a "gaffe machine."

"Here's the thing... nobody's perfect. No organization is perfect. When we make a mistake, what do we do? We say 'We made a mistake, we're sorry' and we correct it." Lemon responded. "Simple as that. That is the big difference. If you're the president of the United States ... 'I made a mistake... my bad. There's a lot going on... let's move on.' We would not be talking about it right now."