CNN sounded the "breaking news" alarm Friday after Republican John Kasich -- a CNN contributor and frequent critic of President Trump -- bucked the GOP and expressed his support for impeachment.

"And I say it with great sadness," Kasich, a former governor of Ohio, explained after confirming his stand against the president.

CNN immediately treated Kasich's remarks as a bombshell, posting a graphic on screen that read, "Just in: GOP's Kasich: Trump deserves to be impeached."

In addition, a report on CNN's website, calling Kasich's remarks "breaking news," was placed prominently on the network's homepage.

Kasich, who stepped down as governor of Ohio in January because of term limits, finished second behind Trump in the 2016 New Hampshire primary. But he dropped out of the race after being unable to win any subsequent primaries, except in his home state.

During the 2016 race, Kasich and Trump frequently locked horns -- so much so that Kasich boycotted that year's Republican National Convention in Cleveland, where Trump officially accepted the GOP nomination for president, even though the event was held in Kasich's home state. 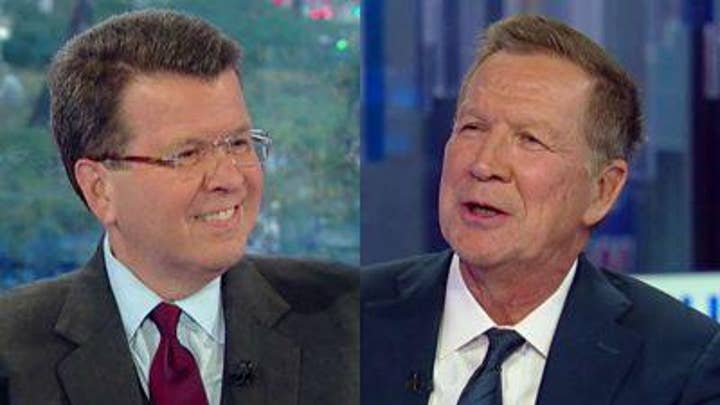 In defending his support for Trump's impeachment Friday, Kasich said the preceding 24 hours had been "very difficult." He cited a news conference at which acting White House Chief of Staff Mick Mulvaney appeared to have contradicted Trump's claim that there was "no quid pro quo" when Trump spoke with the president of Ukraine in July.

Mulvaney later walked back his comments, but Kasich claimed Mulvaney's initial remarks had "pushed him really across the Rubicon.”

“Withholding military aid, vital military aid to a nation like Ukraine... so that a political operation can take place, investigate this thing around the server," Kasich explained. "And 'We’re going to withhold the aid until do you that.’ To me, it’s totally inappropriate. It’s an abuse of power."

He added: "I've fought with people on the air about, 'Is there a quid pro quo?' and 'Does this rise to the level of impeachment?''

"I now believe that it does," Kasich concluded.

The ex-governor recently clashed with CNN anchor Don Lemon over whether the Trump-Ukraine phone call included a quid pro quo.

The clash got so heated, Lemon suggested that Kasich was sounding like a "Trump apologist."

"You are doing exactly what the apologists are doing," Lemon said. "Then you are not helping people understand the real problem, then you are part of the problem."