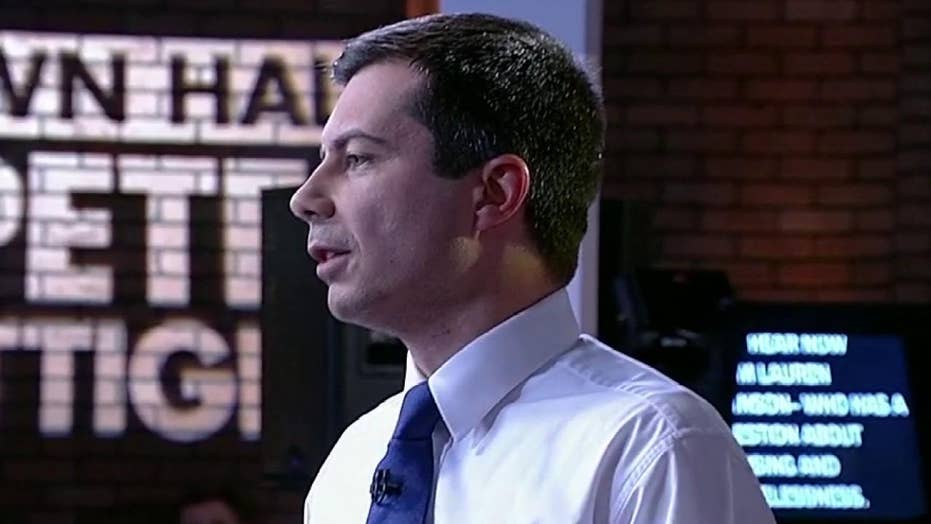 How the Democrat Party has moved further left on abortion

Indiana Mayor Pete Buttigieg sparked an uproar on social media after he seemed to condone late-term abortion during an interview with “The View” on Thursday. But if you only watched ABC, CBS and NBC’s news shows, you might not know it happened.

Fox News searched video recordings and transcripts for major broadcast news shows and found that none of them mentioned Buttigieg’s comments. That included the evening news shows (“NBC Nightly News,””CBS Evening News,” and “ABC World News Tonight") on Feb. 6, as well as the morning news shows (The “TODAY Show,” “CBS This Morning,” and “Good Morning America”) on Feb. 7.

When broadcast networks did mention Buttigieg, they focused on his tight race with Sen. Bernie Sanders, I-Vt., in Iowa.

MEGHAN MCCAIN CONFRONTS BUTTIGIEG ON LATE-TERM ABORTIONS: 'THIS IS GOING TO HURT YOU'

When Buttigieg mentioned Iowa on “The View,” it occurred in a broader conversation about his electability. At one point, co-host Meghan McCain told the 2020 candidate he would hurt his popularity among voters by pushing what she said was a “radical” view of late-term abortion.

"What if a woman wanted to invoke infanticide after a baby was born -- you'd be comfortable with that?" McCain asked. Buttigieg balked at McCain's argument, asserting that late-term abortions involved women who intended to carry their babies to term and get "the most devastating news" of their lives.

"We're talking about families that may have picked out a name -- may be assembling a crib -- and they learn something excruciating and are faced with this terrible choice -- and I don't know what to tell them morally about what they should do. I just know that I trust her and her decision medically or morally isn't going to be any better because the government is commanding her to do it in a certain way," he said.

It's unclear why media outlets didn't cover the issue, but polling has indicated the Iowa victor's position contrasts with the majority of Americans. Polling has tended to show a slew of other issues ranking higher among voter concerns before the 2020 election. But according to Gallup's historical trends, Americans consistently said they wanted abortions to be legal under only certain, rather than all, circumstances. And a Marist poll from January showed that about two-thirds of registered voters said they were more likely to vote for candidates who limit abortion to the first trimester. That included 44 percent of Democrats.

According to the conservative Media Research Center, networks similarly ignored Virginia Governor Ralph Northam's comments about abortion. During a radio interview in 2019, Northam appeared to condone letting infants die after birth, based on the consent of the mother and physician.

According to Students for Life President Kristan Hawkins, the media’s omission was part of a broader problem with abortion coverage.

“'The [V]iew finds out that they can make news on anything BUT abortion,” Hawkins said in a statement provided to Fox News.

“Through all the Democratic Debates, to Mayor Pete's unwillingness to denounce infanticide, the media has its head in the sand refusing to notice how extreme the Democratic field is on abortion and how sharply the two parties contrast on this point.”

Media Research Center Vice President Dan Gainor told Fox News: "The reality is that Buttigieg is an abortion extremist in the eyes of the vast majority of Americans. But the press don’t cover his statements because they agree with him."

ABC, CBS, and NBC did not immediately respond to Fox News' request for comment.

Buttigieg’s comments came as he led the pack of candidates in Iowa and faced heightened scrutiny over his position on abortion.

A perceived moderate, Buttigieg is running for the nomination of a party that has taken controversial positions on the issue in the past few years. In general, the abortion debate appeared to intensify under President Trump with candidates pledging to undo the Hyde Amendment and codify Roe v. Wade. New York and Illinois have received heightened attention over the extent to which politicians were willing to allow abortions.

Kristen Day, who leads Democrats for Life, caught attention when she asked Buttigieg about the issue during a Fox News town hall. While answering, Buttigieg similarly told Day that women should be in charge of abortion decisions.