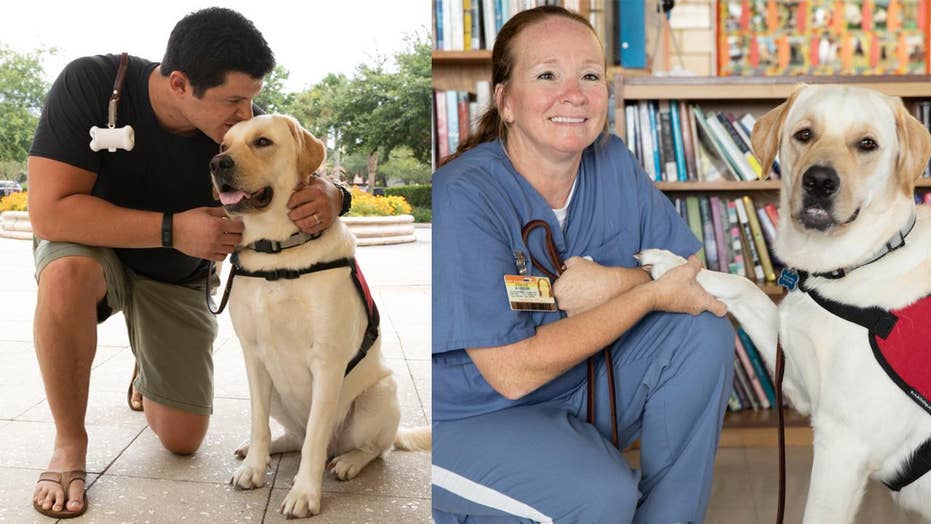 A look at the story of a soldier, an inmate, and a service dog named Hawkeye. How one program, the Women Offering Obedience and Friendship (W.O.O.F) program of Patriot Service Dogs uses inmates at the all-women’s prison at Lowell Correctional Facility in Ocala, Florida, to train service dogs and help servicemen and women.

Rehabilitation can come in a multitude of ways, but for one Army soldier and an inmate, it comes on four legs in a golden-lab mix service dog named Hawkeye.

Hawkeye was donated to Mike, an active duty Army soldier who is in the process of being medically discharged and could not disclose his last name, after he suffered a life-changing injury while deployed to Afghanistan. In 2017, the Humvee Mike was riding in was hit by a rocket-propelled grenade.

“I just kind of ducked just a little bit, and by that time, it had come through the windshield, hit the armor behind my head, exploded, and the blast, knocked me out instantly,” Mike told Fox News. “I don’t remember much, but apparently it blew open the doors, and that’s what shattered about 30 percent of my skull, and when I woke up I was in Walter Reed.”

For months Mike had only a piece of skin covering his brain, which was peppered with catheters pulling spinal fluid out of it to control the swelling. Surgeons replaced the flap of skin with a titanium plate dozens of surgeries later. Mike still felt the effects of massive head trauma including a high risk for seizures and stability issues. Mike said that an injured friend of his had received a service dog, and his friend’s experience inspired him to seek out his own.

“The skills that these dogs have are remarkable, and especially with all of the meds that they push on us for various reasons, whether it’s pain or other things, these dogs have the ability to take away a lot of that away in ways that I didn’t realize,” Mike said.

Licensed clinical psychologist Diego Hernandez works with veterans who suffer a wide range of head injuries. Hernandez told Fox News that many of the injuries coming out of Iraq and Afghanistan, like Mike’s, are unique and different from what medical professionals have prepared for in the past.

“When somebody has that kind of a defuse injury, they need support, they need resources, and service dogs are highly trained pieces of equipment,” Hernandez said. “That helps them manage their medication, that can help with seizures, that can help when they fall. The service dogs provide that extra support 24-hours a day, and actually gives the family a reprieve”

Both Mike and the friend who inspired him received their dogs through the Women Offering Obedience and Friendship (W.O.O.F) program of Patriot Service Dogs. The W.O.O.F program uses inmates at the all-women’s prison at Lowell Correctional Facility in Ocala, Florida, to train the service dogs.  Julie Sanderson, CEO of Patriot Service Dogs, said that W.O.O.F not only helps rehabilitate veterans, but also helps rehabilitate inmates.

“As women who are incarcerated, lots of them are very timid, when they answer you, they don’t look at you and stand up straight,” Sanderson told Fox News. “In the real world that’s an important skill, it’s important that they see the value in themselves, and that they know they can do something wonderful.”

Hyla Hanson is currently serving at Lowell for a probation violation for drug charges. She began training Hawkeye when he was just 8-weeks-old. The trainers teach the dogs 85 commands that range from the more-basic “sit” to progressively more difficult tasks like turning on light switches and removing shoes.

Hanson said that patience is key when training the dogs, especially when teaching the dogs the more challenging skills.

“We need to learn how to keep the dog from barking, without getting angry or upset, because it manifests in the dog,” Hanson said. “Those are some of the behavioral issues we have to work through in ourselves, not to get angry, and learn how to correct, and then just move on without holding a grudge, and knowing not to take it personally.”

“Hawkeye’s always happy, his calm demeanor, is one thing, even when I’m antsy and anxious, he’s always calm,” Mike said. Hawkeye has also helped give Mike’s wife, Jenna, a sense of calm.

“If I’m not with him and he were to fall or something like that, the fact that he would still be taken care of, Hawkeye’s helpful in ways we didn’t imagine,” Jenna said.

Marie Bogdonoff, president of Villagers for Veterans, sponsors service dogs like Hawkeye for W.O.O.F through her organization.

“The reason Villagers for Veterans sponsors service dogs from Patriot’s W.O.O.F program is because it’s a win-win situation for all concerned,” Bogdonoff said. “The program produces extremely well-trained service dogs, veterans receive a great service dog, and it gives the women at Lowell a second chance at life.”