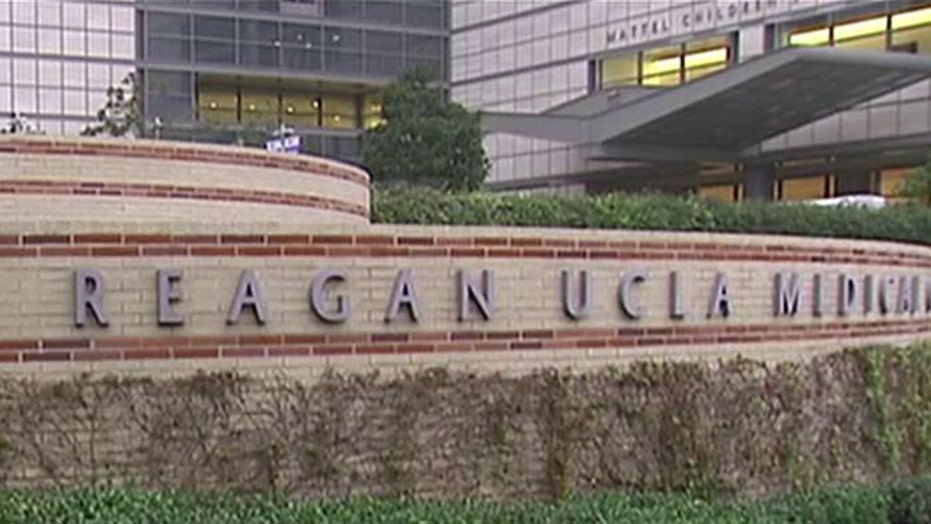 LOS ANGELES – One of the seven patients infected by a “superbug” outbreak suspected in deaths of two Los Angeles hospital patients is struggling not to become the third fatality, his attorney said Thursday, as the incident raises disturbing questions about the design of a hard-to-clean medical instrument used on more than half a million people in the U.S. every year.

The unidentified 18-year-old student has spent nearly three months in the hospital after being admitted for a procedure that involved using an endoscope device to examine his pancreas, Attorney Kevin Boyle said Thursday. He is said to be in grave condition.

“They were scoping it out, trying to see what was the matter,” Boyle said. “He had no life-threatening condition before like he does now.”

More than 170 other patients may have also been exposed to a potentially lethal, antibiotic-resistant strain of bacteria known as carbapenem-resistant Enterobacteriaceae, or CRE, after undergoing endoscopic procedures at Ronald Reagan University of California, Los Angeles Medical Center between October and January. Superbug infections are difficult to treat because some of the bacteria have become resistant to antibiotics, and the U.S. Centers for Disease Control and Prevention (CDC) said the germs could contribute to death in up to 50 percent of infected patients.

The infections may have been transmitted through two contaminated endoscopes that were used to diagnose and treat pancreatic and bile-duct problems. The instruments were found to have "embedded" infections even though they had been cleaned according to manufacturer's instructions, said Dr. Robert Cherry, the hospital's chief medical and quality officer. Five other scopes were cleared as free of the bacteria.

“After he had the procedure he was released. Then he came down with his illness, and when they studied him and noticed he had the CRE bacteria in him they quickly put two and two together,” Boyle said of his client.

At a news conference Thursday afternoon, health officials sought to reassure the public that there is no broad danger.

"This outbreak is not a threat to public health," said Dr. Benjamin Schwartz, deputy director of acute communicable disease control and prevention for the LA County Department of Public Health.

Infections of CRE have been reported at hospitals around the country, and some have been linked to the type of endoscope used at UCLA.

National figures on the bacteria are not kept, but 47 states have seen cases, the CDC said.

A similar outbreak occurred in Illinois in 2013. Dozens of patients were exposed to CRE, with some cases apparently linked to a tainted endoscope used at Advocate Lutheran General Hospital in Park Ridge, Ill. The hospital later changed its sterilization procedures.

A Seattle hospital, Virginia Mason Medical Center, reported in January that CRE linked to an endoscope sickened at least 35 patients, and 11 died, although it was unclear whether the infection played a role in their deaths.

The device in question, a duodenoscope, is a thin, flexible fiber-optic tube that is inserted down the throat to enable a doctor to examine an organ. It typically has a light and a miniature camera.

Doctors first discovered the problem at UCLA in mid-December when a patient underwent an endoscopic procedure and developed an infection that couldn't be treated with antibiotics.

It was determined that CRE infections had been passed on from one "source case" patient between Oct. 3 and Jan. 28, Rubin said.

The hospital has notified potentially exposed patients through letters and phone calls and is offering free testing and treatment options.

Health inspectors visited UCLA after being notified and found "no breaks and no breaches" in its disinfection process, Schwartz said.

"You can very easily do everything right and still have some contamination," said Dr. Deverick Anderson, an infectious-disease expert at Duke University. "We're finding this is a problem, but it's probably one that we don't have a very good solution to right now."

The U.S. Food and Drug Administration on Thursday issued an advisory warning doctors that even when a manufacturer's cleaning instructions are followed, germs may linger. The device's complex design and tiny parts make complete disinfection extremely difficult, the advisory said. Between January 2013 and December 2014, the FDA received 75 reports involving 135 patients in the U.S. who may have been infected by tainted scopes.

In a statement, the FDA said it is trying to determine what more can be done to reduce such infections. But it said that pulling the device from the market would deprive hundreds of thousands of patients of "this beneficial and often life-saving procedure."

"The FDA believes at this time that the continued availability of these devices is in the best interest of the public health," the agency said.

The manufacturer of the devices, Olympus Corp. of the Americas, an arm of Japan's Olympus Corp., said in a statement that it emphasizes the importance of meticulous manual sterilization of its instruments. It says it is giving new supplemental instructions to users of the endoscopes and is working with the FDA on the infection problem.

That statement said the company is talking with the Justice Department to "resolve the matters under investigation."