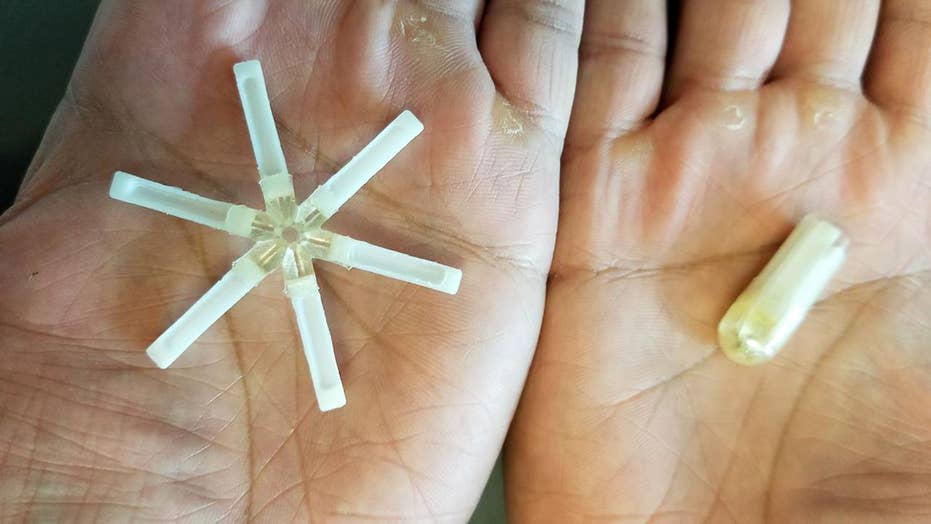 Scientific breakthrough could help women who use birth control

Researchers at Massachusetts Institute of Technology have created a device which contains an entire one-month supply of birth control.

Birth control pills work great if women remember to take them every day, but missing doses can mean a surprise pregnancy. Now scientists have figured out how to pack a month’s supply into one capsule.

The trick: A tiny star-shaped gadget that unfolds in the stomach and gradually releases the drug.

The experimental capsule is still years away from drugstores, but researchers reported Wednesday that it worked as designed in a key test in animals. The Bill and Melinda Gates Foundation is investing $13 million for further development of the once-a-month pill, in hopes of eventually improving family planning options in developing countries.

“It has a lot of potential,” said Dr. Beatrice Chen, a family planning specialist at the University of Pittsburgh, who wasn’t involved in the new research. “Birth control is not one-size-fits-all,” and women need more options.

This undated photo provided by MIT/Langer Lab shows a star-shaped gastric resident dosage form of birth control that can be folded into a standard capsule and orally ingested. The dosage form resides in the stomach for up to a month where it releases the contraceptive drug.​  (Paramesh Karandikar/MIT/Langer Lab via AP)

Today, women who want the convenience of long-lasting contraception can choose among various devices, from a weekly patch to a monthly vaginal ring to an IUD that lasts for years.

It wasn’t clear that “the Pill” — one of the most popular forms of birth control because it’s cheap and easy to use — ever could join that list. Pills of all sorts generally pass through the body in a day.

A team from the lab of Massachusetts Institute of Technology inventor Robert Langer engineered a fix to protect pills from the harsh environment of the digestive system.

“We developed this capsule system that looks like a starfish, that can stay in the stomach several days, weeks, even a month at a time,” said Dr. Giovanni Traverso of Boston’s Brigham and Women’s Hospital, a senior author of the study.

The star-shaped device has six arms, and each holds a certain medication dose. The device is folded inside an ordinary-sized capsule. Swallow the capsule and stomach acid dissolves the coating, letting the star unfold. It’s too big to fit through the stomach’s exit but not big enough to cause an obstruction. As medication dissolves out of each of the arms, the device breaks down until it can safely pass through the digestive system.

Langer and Traverso’s team first used the technology to try turning daily drugs for malaria and HIV into capsules that lasted a week or two. They also are experimental, but longer-lasting pills one day could help patients with serious diseases better stick with treatment.

A logical next attempt: A month-long oral contraceptive.

First, they had to tweak the star-shaped device. They made it stronger and turned to long-lasting contraceptive implants for the materials to hold the hormone ingredient and let it gradually seep out.

Then they tested the contraceptive capsules in pigs, which have human-like digestive systems. The experimental capsules released the contraceptive fairly consistently for up to four weeks, and the amount in the pigs’ bloodstream was similar to what daily tablets deliver, MIT lead authors Ameya Kirtane and Tiffany Hua reported in the journal Science Translational Medicine.

Lyndra Therapeutics Inc., a Massachusetts company co-founded by Langer and Traverso, is further developing the monthly pill and multiple other uses for the technology.

To be most useful, the capsule should be designed to emit three weeks of contraception and then allow for a woman's period, like a month's supply of birth control pills does, Traverso said. That would alert women when it was time to take another monthly dose.

Pittsburgh's Chen cautioned that more safety testing is required, including how well the experimental capsule breaks down and what's the proper dose of different hormones, before this can be tested in women. Other questions include whether the device dissolves in the same way in different people.

But if it pans out, Chen said it would be exciting to try combining both contraception and HIV drugs into the same capsule, particularly for developing countries where women are at high risk of the virus that causes AIDS.