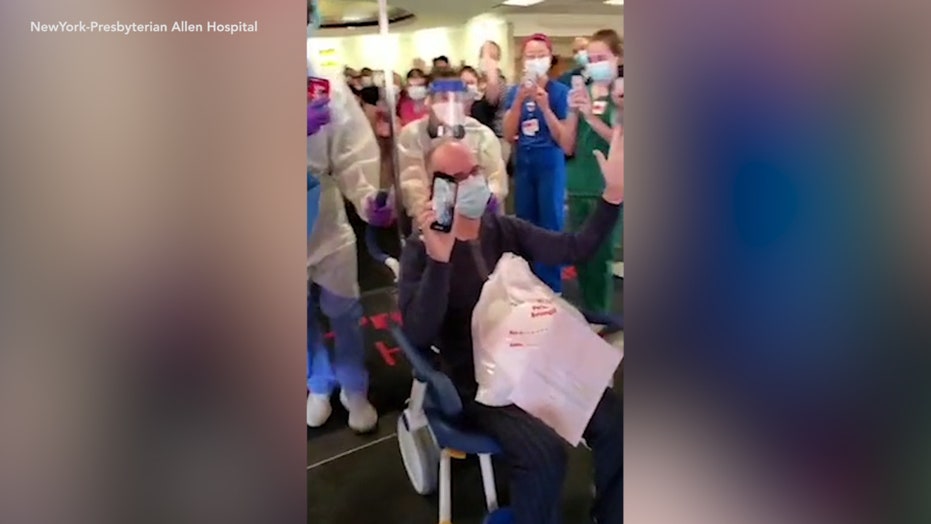 Tom Berisha, who was admitted to NewYork-Presbyterian Allen Hospital in early April, said that he will forever be thankful to the staff who helped heal him during his stay.

A New York man who spent 27 days fighting the novel coronavirus in the hospital was given a celebratory sendoff by staff who helped release him to his ecstatic wife and family. Tom Berisha, who was admitted to NewYork-Presbyterian Allen Hospital in early April, said that he will forever be thankful to the staff who helped heal him during his stay.

“I get to celebrate two birthdays now: my discharge day and my actual birthday,” Berisha, 49, said, according to a news release from NewYork-Presbyterian. “The staff didn’t give up on me. They did amazing work.”

Berisha said he was surprised when several nurses began following his wheelchair on the day of discharge, and that he began to notice that several others were dancing through the hallway.

“This was a special patient because every day was a new plan of care, so many different members of the staff were involved,” Cynthia Quezada, clinical nurse manager at the hospital, said.

When he arrived in the lobby, a full team of workers and staff members were waiting to celebrate with him, as well as his wife and two children. Berisha himself joined in the moment and stood up from his wheelchair to dance along with cheering staff.

“To finally see him standing up, reuniting with his family, and going home to get better was overwhelming,” Quezada said, according to the news release. “We really appreciate the success stories through this pandemic. It is a light at the end of the tunnel for the patient and for the staff.”

Berisha’s wife, Flora, said the family is “so happy and grateful he is home.”

Hospitals across the country have taken to playing celebratory music to mark the release of COVID-19 patients. “Here Comes the Sun,” “Every Breath You Take," and "Don’t Stop Believin'" are several of the popular choices across the tristate area.