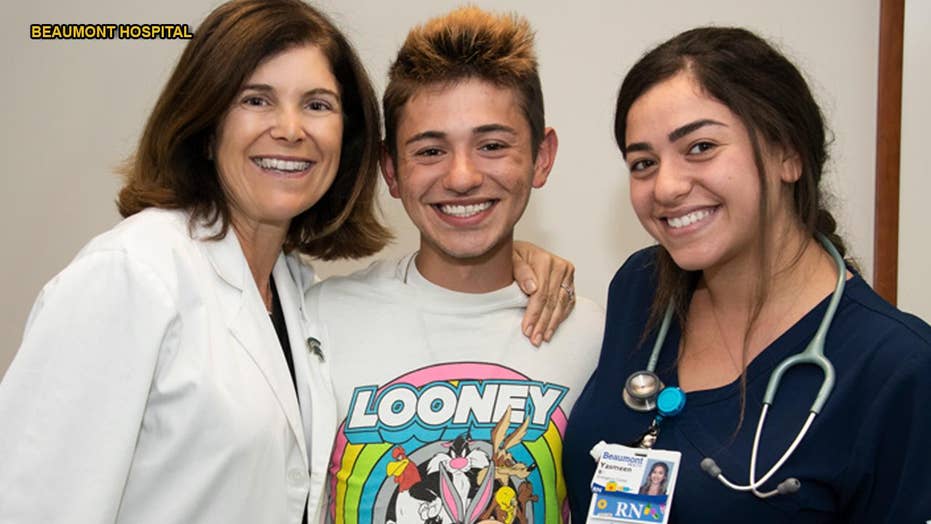 Michigan man 'dead for 20 minutes,' brought back to life after being electrocuted

Michael Truitt had been working with his stepdad at a home when a metal ladder he was carrying touched a live wire, electrocuting him. Truitt was 'dead' for 20 minutes before being brought back to live thanks to a dedicated team at Beaumont Hospital. According to the hospital's blog, the only lasting injury Truitt has from the ordeal is in his toes, where the voltage electricity exited through his body.

A Michigan man is lucky to be alive after getting electrocuted, especially considering he was dead for 20 minutes before several shocks to his heart jolted him back to life.

“They brought in this perfect young man who had no vital signs,” said Dr. Angel Chudler, an emergency room physician at Beaumont Hospital, according to the hospital's blog. “I said to my team, ‘We’re bringing him back.’ And then I said to him, ‘You better come back!’”

And after another jolt from the defibrillator, 20-year-old Michael Truitt came back.

Michael Pruitt is pictured with Dr. Angel Chudler and nurse Yasmeen Bachir, who helped bring him back to life after he had no vital signs for 20 minutes.  (Beaumont Hospital)

“When he became conscious again, he was like the Hulk, grabbing the railings and shaking the bed with huge strength. It took the entire care team to hold Michael,” Yasmeen Bachir, a clinical nurse who helped care for Truitt, said in the blog post, which also stated that Truitt was "dead for 20 minutes" prior to resuscitation.

Truitt had been working with his stepdad at a home in Livonia when a metal ladder he was carrying touched a live electrical wire. He said he doesn’t remember anything past that, but the homeowner called 911 and started CPR. It took about four minutes for paramedics to arrive and they attempted to revive him with the defibrillator while en route to the hospital, but he never regained a heartbeat in the ambulance.

“In less than five minutes, brain cells start to die from lack of oxygen,” Barbara Smith, the director of trauma services at Beaumont, told the hospital blog. “Michael’s resuscitation is miraculous. He did not lose any brain function. It’s a testament to the importance of immediate continuous CPR to move oxygenated blood to the brain.”

The only lasting injury Pruitt has from the ordeal is in his toes, where the voltage electricity exited through his body, the website said.