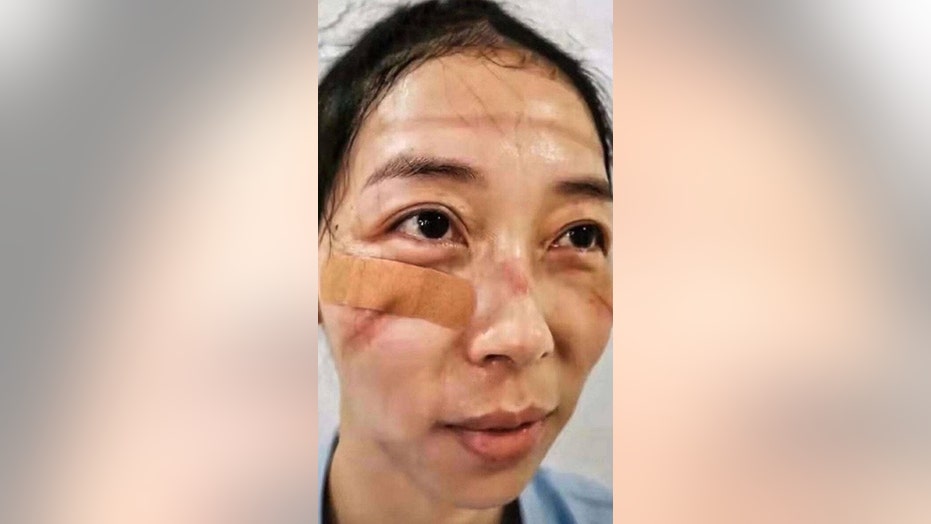 Doctors in Wuhan, the coronavirus epicenter, have taken to social media to share photos of marks and bruises allegedly left on their faces from protective gear after working round-the-clock to treat thousands of patients. More than 24,000 people have been sickened by the coronavirus, with 99 percent of cases occurring in mainland China.

A nurse shared a photo of the marks left on her face by safety goggles after working long hours to treat coronavirus patients. (AsiaWire)

On the ground, Chinese officials erected a 1,000-bed hospital in Wuhan to help relieve the overwhelmed facilities as the number of cases spiked. But at least one report suggested medics have resorted to wearing adult diapers while working because they do not have time to use the bathroom, and they do not have extra hazmat gear in case theirs rips while taking it off.

Last week, UNICEF sent 6 metric tons of supplies to Wuhan, including respiratory masks and protective suits, but getting it to the city can prove difficult. Wuhan, which has been under quarantine since Jan. 23, is short on hospital beds and have been asking for patients identified as those most in need to seek medical attention.

One doctor claimed he hadn't been home in two weeks due to the outbreak.  (AsiaWire)

One doctor told the South China Morning Post that he had not been home in two weeks. China had sent over 400 military medical staff to Wuhan to help cope with the influx of patients, but medics continue to vent their frustration on social media. There are also reports of some medics facing violence from frustrated patients.

“Emotions are running high as the hospital has been running at maximum capacity since early January,” one doctor said, according to the news outlet. “Many cannot find a bed. But what can we do? Doctors and nurses are working non-stop, even the midnight shift is totally full. We are surrounded by patients coughing next to us all night long.”

On the other side, patients and their caregivers say a communication breakdown between local officials and residents about what to do and where to go for help is causing the buildup of frustration.

Medics claim they are even facing violence from frustrated patients.  (AsiaWire)

“We are bitterly disappointed in the attitude of our public officials,” a Wuhan resident told NPR. “One after another they tell us they do not know who we should contact for help.”

With the city’s transportation shut down since the quarantine began, it’s also difficult for patients and caregivers to reach the isolation wards and hospitals.

“We listened to everything officials told us to do,” another Wuhan resident told NPR. “We were so obedient. They said [to] go into isolation, so we sent [my aunt and my mother] into isolation wards. But let me tell you what these wards really are; they are places where you send people to die by themselves.”

In Hong Kong, frustrations boiled over to multi-day strike by medical workers who are calling for the government to seal the border to mainland China. As many as 7,000 workers refused to show up to work beginning on Monday.

“Important services, critical operations have been affected,” Carrie Lam, Hong Kong’s chief executive said. “So I’m appealing to those who are taking part in this action: Let’s put the interest of the patients and the entire public health system above all things.”