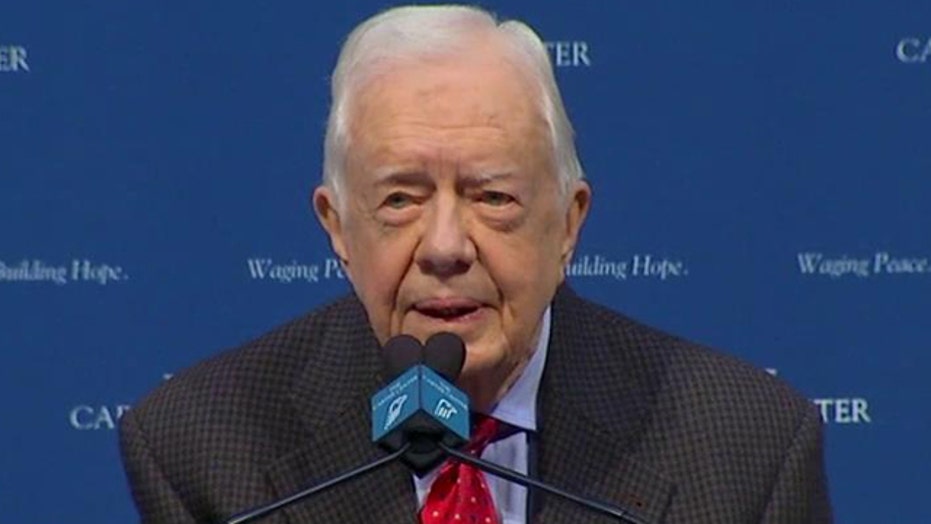 Jimmy Carter says he will undergo radiation for brain cancer

Former President Jimmy Carter announced Thursday that his cancer is on four small spots on his brain and he will immediately begin radiation treatment, saying he is "at ease with whatever comes."

"I'm ready for anything and looking forward to a new adventure," said Carter, appearing upbeat and making jokes as he openly talked about his cancer during a news conference.

So far, the pain has been "very slight" and Carter said he hasn't felt any weakness or debility. Still, he will cut back on his work with the Carter Center and will give the treatment regimen his "top priority." His first radiation treatment was set for Thursday afternoon.

"The radiation is to control the local tumors in his brain since radiation only works at the area you point it at," Dr. Anna C. Pavlick, an associate professor and co-director of the melanoma program at New York University Langone’s Perlmutter Cancer Center told FoxNews.com. Pavlick is not involved in Carter's treatment, but added that physicians treat metastatic melanoma systemically with either immunotherapy or targeted therapies with the goal of eradicating the tumors that are visible as well as the circulating microscopic cells that are not visible but are searching for a place to start growing.

"We [physicians] focus on controlling the disease in the brain with radiation," Pavlick said. "Usually this radiation is stereotactic and focuses many beams of radiation just at the tumor and does not affect any normal brain tissue. If however, there are multiple tumors (greater than 1) or large in size (greater than 3 cm), patients may be given whole brain radiation to try to treat all of the disease," she said.

Carter, appearing in a dark blazer, red tie and jeans and surrounded by friends and family, said at first he thought the cancer was confined to his liver and that the operation earlier this month had completely removed it, "so I was quite relieved."

But that same afternoon, an MRI showed it was on his brain.

"I just thought I had a few weeks left, but I was surprisingly at ease. I've had a wonderful life," the 90-year-old Carter said. "It's in God's hands. I'll be prepared for anything that comes."

He didn't give any prognosis, but spoke about receiving treatments for at least several months and left open the possibility of traveling to Nepal in November.

"So far the only place they've known about cancer has been my liver and my brain,"

According to Pavlick, the outlook for patients of metastatic melanoma has changed dramatically over the past few years.

"Prior to five years ago, the prognosis for metastatic melanoma to the brain and liver was less than six months," she said. "With the advent of systemic immunotherapy and stereotactic radiation to the brain, the outcome for these patients has dramatically changed. Many of these patients can have disease control for years with an excellent quality of life."

Carter announced Aug. 12 that liver surgery found cancer that has spread to other parts of his body. Carter said doctors took out about a tenth of his liver and that they believe they removed all the cancer there.

He said it's still not clear exactly where the cancer originated, although with melanoma, he's told that 98 percent of the time it develops first in the skin. He also said that the rest of his body will be scanned repeatedly for months to come and that more cancers may show up elsewhere. The cancer spots on his brain are about 2 millimeters.

His father, brother and two sisters died of pancreatic cancer. His mother also had the disease. Carter said no cancer has been found on his pancreas so far.

That's "the first time they've called me in a long time," Carter said to laughter.

Carter's health has been closely watched this year. He cut short an election monitoring trip to Guyana in May. A spokeswoman said he did not feel well and Carter later said he had a bad cold.

The center announced Carter had a small mass removed from his liver Aug. 3. Nine days later, Carter said that surgery revealed the cancer.

Carter was the nation's 39th president, advancing as a virtual unknown on the national stage to defeat President Gerald Ford in 1976. But several foreign policy crises, in particular the Iran hostage crisis, crushed his bid for re-election and Ronald Reagan swept into the White House.

The native of tiny Plains, Georgia, rebuilt his career as a humanitarian guiding the center focused on global issues, including health care and democracy. Carter earned a Nobel Peace Prize in 2002, helped defuse nuclear tensions in the Koreas and helped avert a U.S. invasion of Haiti.

He and his wife, Rosalynn, still make regular appearances at events in Atlanta and travel overseas. When the couple is in Plains, Carter frequently teaches a Sunday School class before services at Maranatha Baptist Church. He plans to teach this weekend as scheduled, according to the church.

"No matter where we are in the world, we're always looking forward to getting home to Plains," Carter said.