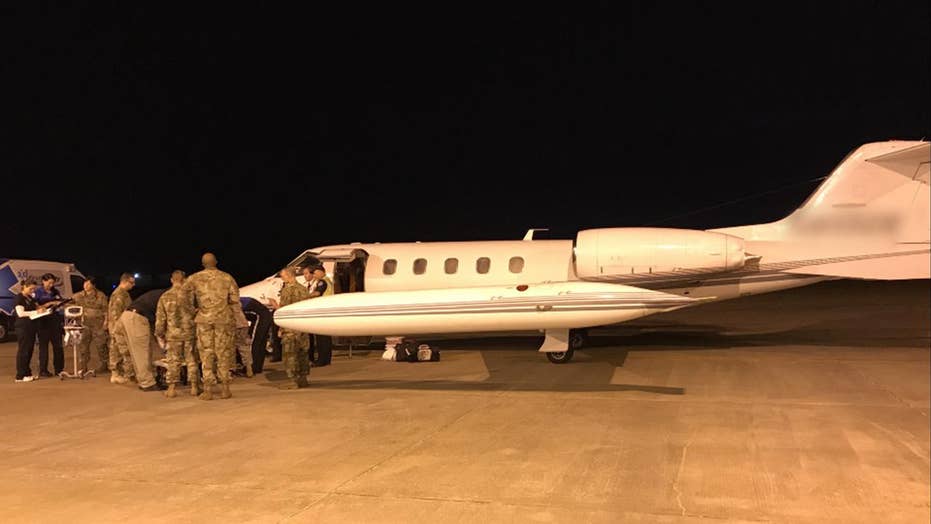 US Virgin Island and Puerto Rico evacuees are being airlifted to a South Carolina airport to receive medical assistance in hospitals around the state’s capitol. The National Disaster Medical System and Federal Coordination Center are managing the transportation of the hurricane victims, many of whom are in critical condition, after Irma and Maria devastated the Caribbean late last month.

Evacuees from Puerto Rico and the U.S. Virgin Islands are being transported to mainland hospitals to receive care for critical medical conditions caused or impacted by Hurricane Maria.

In South Carolina, more than a dozen evacuees have arrived at the Columbia Metropolitan Airport by C-130 or private jet to be transported to various medical facilities around the state’s capitol.

“I love helping people,” Major Karean Troy with the Army Reserves told Fox News. “Many of the people we bring in are elderly patients….. if that were my mom or my grandmother (that) was brought to a foreign place with no one…. I would want them to have the best care possible.”

TROPICAL STORM NATE LIKELY TO FORM FROM SYSTEM IN CARIBBEAN

In Puerto Rico, 59 out of 68 hospitals are open but not considered fully functional. Troy and her team from Fort Jackson are a part of the National Disaster Medical System, N.D.M.S, and Federal Coordination Center, F.C.C, which were activated in cities within the southern states of Louisiana, Mississippi, Georgia, and South Carolina in an effort to provide free medical assistance to those suffering from life threatening issues.

As a patient administration officer (PAD), Troy’s mission is to track an evacuee’s status during their flight from the Caribbean and coordinate which medical facility they will be transported to based on their health care needs.

“When that plane is in the air I want to know exactly where that patient is going before they hit the ground and that’s my goal for every patient that comes into Columbia,” Troy said.

Lieutenant Colonel John Clouse, the F.C.C’s chief of medical operations, helps coordinate what aircraft the patient and accompanying family or friends will be transported on.

“We generally plan for larger air craft, the C-130 or the C-17 with a larger number of folks there on board," he said. "So we have rescaled our package here at the F.C.C Columbia to receive smaller packages of patients.”

Clouse and Troy’s unit works conjointly with FEMA and the Department of Health and Human Services to do this humanitarian lift on a 24-hour basis.

Upon landing at the Columbia Metropolitan airport members of the N.D.M.S re-triage the patient and load them into an ambulance to be transported to a facility.

“At that point the hospital does what they do every single day," Clouse said. "They take great care of the folks that come off the plane.”

There are nearly a dozen hospitals around the Palmetto state helping incoming evacuees. Many of the patients that have come to South Carolina required immediate surgery for a variety of health ailments including heart complications, head trauma, and complications from the lack of appropriate medication and other life threatening issues.

A team from the Department of Health and Human Services monitors the patient’s status while they are recovering in the facility.

“When they are ready to be discharged from the hospital their bill is paid (by the U.S Public Health Service) and those folks (Department of Health and Human Services team) arrange for transport to their next location,” Clouse said.

A Fort Jackson spokesman said the team will continue to help evacuees until they receive further instruction from FEMA.