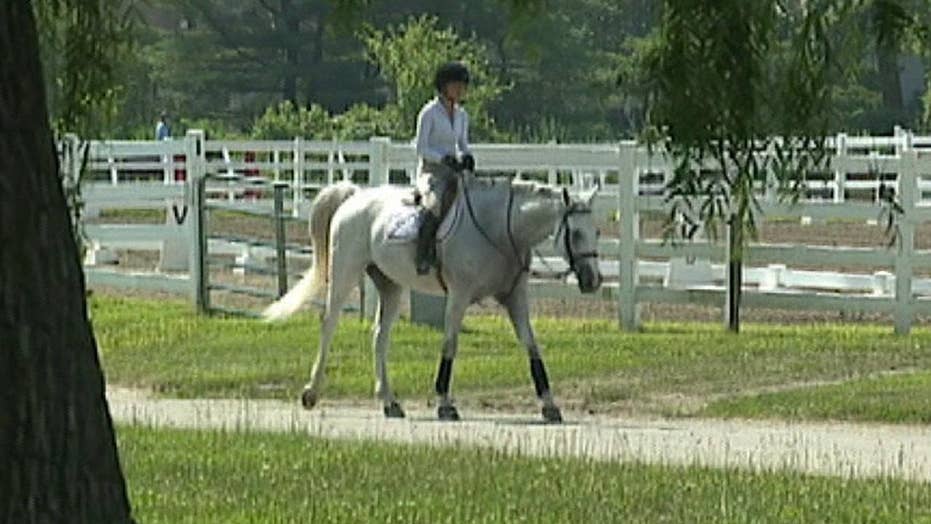 For the first time ever, a clinical research trial has been conducted to investigate the potential benefits of equine-assisted therapy as a treatment option for patients with PTSD, primarily veterans.

These are not your average service animals.

For the first time ever, a clinical research study has been funded – not by the government, but by a private citizen – to investigate the potential benefits of pairing patients with PTSD, specifically veterans, and horses. And the early results are promising.

“I can give you a preview… and it does seem to really work,” said Dr. Jeffrey Lieberman, Chair of the Columbia University Department of Psychiatry and the expert who oversaw the study. “And it’s pretty much harmless, there’s no side effects or risk to subjecting someone to equine therapy, like some medication,” Lieberman added.

For veterans, this kind of breakthrough could have an exponential effect. “Being in the military, you would think that there is a self-contained system that would be providing health care, including mental health care, that would be good,” Lieberman said. But, he added, “the statistics indicate that's not the case”

Up to 30% of veterans are affected by PTSD, more than 20 veterans take their own lives every day, and the veteran population accounts for 18% of all suicide deaths in the United States, according to the latest statistics.

The concept is called equine-assisted therapy (EAT), and the idea behind it is not to have patients ride horses, but to use them as therapy companions.

The Man O’War Project at Columbia’s Irving Medical Center set out to determine not only the effectiveness of EAT treatments in veterans with PTSD, but how this therapy could be used to establish new guidelines for treatment of anyone who has suffered trauma – including, potentially, children some day.

Doctors conducted MRI imaging on participants before and after a series of therapy sessions that spanned some eight weeks. And the veterans who took part, and those who might benefit down the road, aren’t the only ones that Ambassador Earle Mack, the former U.S. diplomat who funded the study, and others set out to help.

The horses picked for this program have a specific pedigree: most of them were either thoroughbred or racing horses, elite professionals effectively abandoned at the end of high-stress careers, often like their human companions.

Ambassador Earle Mack was inspired to fund the Man O'War project after experiencing the benefits of working with horses firsthand. (Photo Credit: Horsephotos)

Rather than see those horses go to slaughter, Mack, a former ambassador to Finland, decided there was an alternative solution that could potentially help more than just his four-legged friends.

“It’s simple, you put equine horses and veterans together and it’s got to help,” Mack, a veteran himself, told Fox News. “It just makes sense.”

During the therapy sessions at the idyllic Bergen Equestrian Center in New Jersey, veterans like Tei Pascal would work with horses on trust exercises, grounding routines and sometimes simply sharing a quiet moment together. Pascal, a 21-year retired Air Force senior master sergeant, told Fox that working with these horses was unlike anything she had ever experienced, and yet also strangely familiar.

“Take, for example, two veterans that are in a space where we need to be hyper-vigilant,” Pascal said. “We know we have to have our eyes open and our ears up and looking. It’s that same thing, that sixth sense you're talking about, and it's the same thing working with the horses,” she added.

"It’s truly been life-changing, and it’s all because of these gentle beasts that I’ve now come to admire."

Pascal said that before finding out about the Man O’War project, she was constantly on edge due to her PTSD symptoms. “One of the things that used to trigger me was thunderstorms,” Pascal said.

“I was immediately taking cover and with my 4-year-old son, this was something that was very alarming to him, as it was to me,” Pascal recalled “But coming [to the Bergen Equestrian Center] through the Man O’War project and working in my sessions with the horses, it’s helped to give me a different perspective.”

Pascal added that the skills she has learned in her sessions are ones that she now utilizes in everyday life. And for those who may be having similar problems, but who might be wary about working with animals that sometimes stand eight feet or taller, she says don’t knock it until you try it.

“It’s truly been life-changing, and it’s all because of these gentle beasts that I’ve now come to admire,” Pascal said.

Lieberman told Fox News it was a disgrace that this sort of research was only achieved thanks to a private citizen – and not to any federal agency, especially since PTSD is an issue that the military has known about for centuries.

“This has been described in the literature going back to the Civil War,”  Lieberman said. “It was called ‘Soldier's Heart’ because one of the features of PTSD was a rapid heartbeat.

“Ideally the military would start taking this seriously, and there would have been a full scale effort to try and study it,” Lieberman said. “In the absence of that, seeing the kind of suffering of not just active duty but veterans who have returned to civilian life, civic-minded people have come forward to say ‘what can we do now?’”

For Mack, the answer was pretty obvious – especially since it presented an opportunity to help not one but two of his greatest loves.