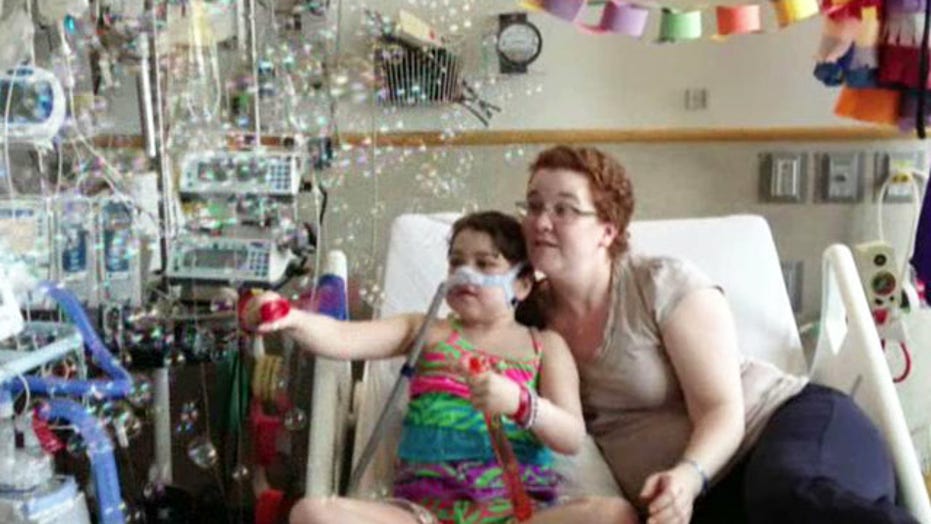 A federal court judge granted a temporary order on June 5 that will allow Sarah, who has cystic fibrosis and desperately needs new lungs, to join an adult organ transplant list.

On June 6, a spokeswoman for the family stated that Sarah's condition had worsened.

Sarah required intubation on Saturday due to difficulty breathing, but since then, her condition has improved, according to a statement from her mother, Janet Murnaghan.

"Sarah's heart has been the biggest win since intubation. Her pulmonary hypertension, caused by lung disease, has greatly improved with the ventilator," Janet stated. "All her other organs are fairing well. She is a great, strong candidate for transplant still.  Come on lungs!"

Judge Michael Baylson made his ruling after hearing oral arguments on a federal lawsuit filed by Sarah's parents, challenging the "Under 12 Rule" that was keeping the 10-year-old off the adult transplant list.

The judge has scheduled a preliminary injunction hearing for June 14, MyFoxPhilly reported.

Baylson's order told Department of Health and Human Services (HHS) Secretary Kathleen Sebelius to direct the group that manages the organ transplant list to cease application of it in Sarah's case.

Since Baylson's initial ruling on Sarah, he has granted another temporary court order to the family of 11-year-old Javier Acosta, who is also suffering from cystic fibrosis and is in need of a lung transplant.

Although the HHS initially declined comment on the judge's ruling, the agency issued a letter on June 6 signed by Sebelius and addressed to Dr. John Roberts, president of Organ Procurement and Transplantation Network (OPTN) Board of Directors.

"I understand that in compliance with the Judge's order, last night at 10:34 p.m. eastern time, OPTN created a second candidate record for Miss Murnaghan with a birthdate that makes the system treat her as a 12 year old. I also understand that her original record remains active, so she retains her priority for pediatric donors," Sebelius said. "I appreciate your immediate attention to the court's order."

In a statement issued after Baylson's ruling, the family said, "We are experiencing many emotions: relief, happiness, gratitude and, for the first time in months: hope."

The statement continued, "We cannot say enough about the global outreach and support we've received on behalf of Sarah -- people of all ages and walks of life have reached out to us, prayed for us, and asked how they could help."

The Murnaghan's retained a lawyer last week and quickly filed their lawsuit, arguing the rule keeping Sarah off the list is "discriminatory."

The family is challenging organ transplant rules that say children under age 12 must wait for pediatric lungs to become available. The Murnaghans say that rarely happens, and they want the rule changed for all children in Sarah's situation.

Sarah's aunt, Sharon Ruddock, believes the 10-day window is long enough for her niece to reach the top of the list and be matched for a transplant.

"She definitely understands things have improved quite a bit," Ruddock said.

A wholesale policy change would add perhaps 20 children from ages 8 to 11 annually to the adult waiting list, which now includes more than 1,600 patients.

Experts, though, questioned Baylson's decision on both medical and ethical grounds.

Lung transplants are the most difficult of organ transplants, and children fare worse than adults, which is one reason for the existing policy, said Dr. Arthur Caplan, a bioethicist at New York University Langone Medical Center.

He called it troubling, and perhaps precedent-setting, for a judge to overrule that medical judgment, and predicted a run to the courthouse by patients who don't like their place on the waiting list.

"I'm not sure I want judges or congressmen or bureaucrats trying to decide what to do with organs at the bedside," Caplan said.

Sarah has been hospitalized at Children's Hospital of Philadelphia for three months with end-stage cystic fibrosis and is on a ventilator. Her doctors believe they can perform a successful transplant with adult lungs.

Secretary Sebelius declined to intervene in the case early last week, despite urgent pleas from several members of Congress from Pennsylvania. Sebelius said that such decisions should be made by medical experts and noted that there were three other children at Children's Hospital alone in the same condition.

Sebelius has called for a review of pediatric transplant policies amid the higher death rates for pediatric patients, but the Murnaghans say Sarah doesn't have time for that.

"Now Sarah has a chance for a lung transplant, and I plan to keep fighting for her and others who deserve to be eligible," said Sen. Patrick Toomey, R-Pa. "Secretary Sebelius should use her authorities to make medical need and suitability, rather than age, be the primary criteria in determining how organ donations are prioritized."

Joel Newman, a spokesman for the Virginia-based United Network for Organ Sharing, which manages the national organ transplant system, said he isn't aware of any previous court action that had "a material effect" on a transplant case.

UNOS sets policies based on feedback from expert committees that include both doctors and transplant recipients, Newman said.

Researchers have less data on lung transplants in pre-adolescents because so few are done, and young children suffer from somewhat different lung problems, according to Dr. John P. Roberts, the network's president.