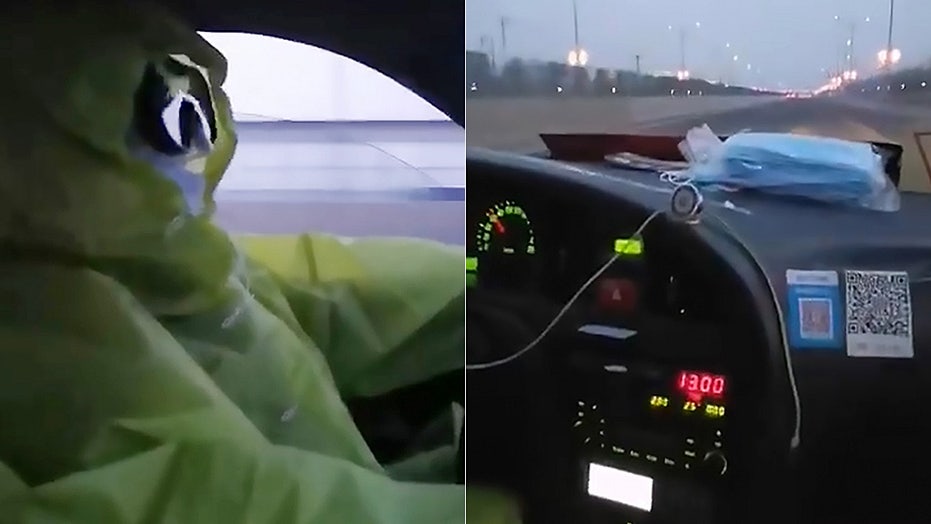 Dr. Anthony Fauci, member of the task force, explains how secondary cases of the coronavirus are being prevented in the United States.

With the number of coronavirus cases in mainland China now surpassing those of the 2002-2003 deadly SARS outbreak, fears of contracting the illness have driven some to extreme safety measures. Such is the case with one unnamed taxi driver in Beijing, who was filmed by his passenger driving in a full hazmat safety suit.

“Do you get many clients while dressed like that?” the passenger allegedly asked the driver.

The cab driver reportedly showed up to pick up his passenger wearing the protective suit.  (AsiaWire)

“These are extraordinary times,” he reportedly responded, according to AsiaWire. “I’m being responsible for myself, and for my family. It’s important to have awareness.”

Footage also showed several face masks on the dashboard, though it is not clear if the driver intended to pass them out to potential passengers.

Beijing is more than 650 miles away from Wuhan, the epicenter of the coronavirus, which as of early Thursday had infected 7,711 people worldwide, with 38 deaths recorded in China. About 99 percent of new cases have been confirmed in China, although it’s been reported in at least 16 other countries, including the U.S.

China had put 16 cities on lockdown in an effort to contain the virus, an unprecedented move estimated to have impacted up to 46 million people. Wuhan had also started work on a special 1,000-bed hospital that it hoped to have completed by Feb. 3. The model is based on a similar hospital erected in Beijing during the SARS outbreak that killed nearly 800 people as it spread through China and other countries.

AMERICAN DESCRIBES SCENE IN WUHAN AMID CORONAVIRUS OUTBREAK: 'LIKE SOMETHING OUT OF A SCI-FI MOVIE'

On the ground, medical personnel was making requests for masks, goggles, gowns and other protective medical gear to deal with the thousands seeking treatment for possible symptoms of the virus, which can be transmitted between humans.

Footage also showed a stack of face masks on his dashboard.  (AsiaWire)

On Wednesday, a chartered flight from Wuhan carrying nearly 200 Americans landed in California after a brief stop in Alaska on Tuesday night to refuel. The passengers had undergone two screenings in China, and two additional screenings in Alaska before deplaning in California, where they underwent more testing and observations.

During the flight, the crew and passengers were kept separated and the crew did not get off the plane in China to minimize risk of contamination. The plan is to temporarily house them at March Air Reserve Base to ensure that nobody develops symptoms of the virus, which can take up to 14 days to appear.

“They are sitting in the middle of a military base,” Dr. Nancy Knight, of the Centers for Disease Control and Prevention (CDC), said. “Any discussion around departure would be just that: it would be a discussion.”