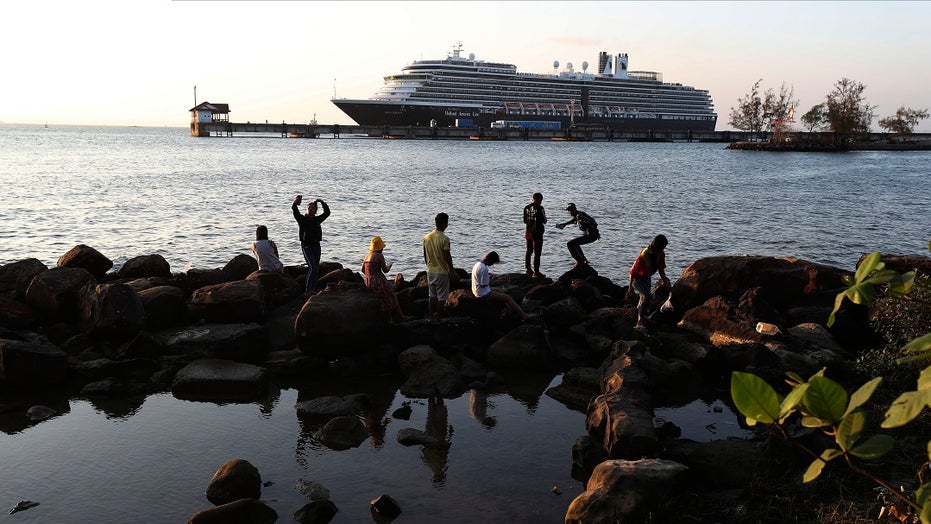 Hundreds of cruise ship passengers cheered as they disembarked the ship in Cambodia on Friday following days of being stranded at sea as several nations refused them entry amid fears of the coronavirus.

Around 500 passengers aboard the MS Westerdam disembarked at the port of Sihanoukville Friday morning after the country's leader agreed to allow the ship to dock after being rejected by Thailand, Japan, Taiwan and the Philippines.

THE 5 DEADLIEST DISEASE EPIDEMICS IN THE UNITED STATES

Passengers and crew stand on the railing of the Westerdam cruise ship as it docks at the port of Sihanoukville, Cambodia, Thursday. The Westerdam, turned away by four Asian and Pacific governments due to virus fears, anchored Thursday off Cambodia for health checks on its 2,200 passengers and crew. (AP Photo/Heng Sinith)

Cambodian Prime Minister Hun Sen handed flowers to the departing passengers, who were put on buses to take them to an airport where they will continue their journey home.

Holland America, which operates the vessel, said 20 samples taken on board the ship came back negative for the virus.

The company maintained throughout the ship's journey that no cases had been confirmed among its 2,200 passengers and crew. The assurances couldn't convince the four Asian governments that barred the vessel amid fears the virus could spread within their borders.

“We are pleased with the successful resolution of this challenging journey that was complicated by unfounded fears stemming from erroneous information with respect to the medical condition of Westerdam’s guests and crew," said Stein Kruse, the CEO of Holland America Group and Carnival UK.

Locals come down to view the Westerdam cruise ship, owned by Holland America Line, docked at the port of Sihanoukville, Cambodia. The Westerdam, turned away by four Asian and Pacific governments due to virus fears, anchored Thursday off Cambodia for health checks on its 2,200 passengers and crew. (AP Photo/Heng Sinith)

The released passengers were seen waving to those on the ship's deck as they left the area.

The illness, officially known as COVID-19, has killed more than 1,400 people worldwide and sickened more than 64,000 others. The vast majority of the cases are in mainland China, where the virus first began in the Hubei province.

Another cruise ship, the Diamond Princess, has been quarantined at Japan's port of Yokohama for several days. Authorities have confirmed 174 coronavirus cases aboard the ship.