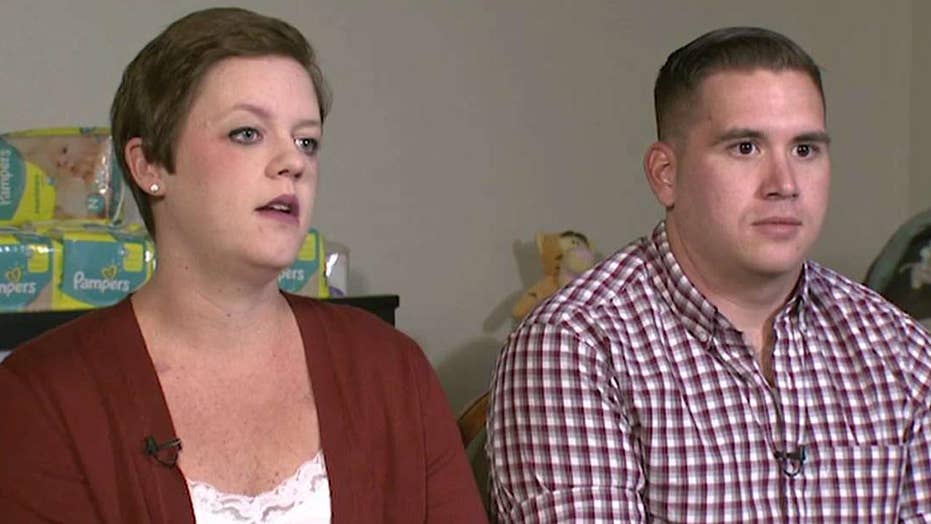 The first year of marriage can be a dramatic one for any young couple. But U.S. Army Sgt. Charles Gaytan and his wife, Kayla— who recently celebrated their one-year wedding anniversary— are on an emotional rollercoaster like few have ever seen.

Sgt. Gaytan is an active-duty military police officer at Fort Campbell, Kentucky, who fell deeply in love with Kayla and her two children. Just after their fairytale wedding, Kayla noticed a lump on her neck.  After several visits to doctors, the 29-year-old mother was diagnosed with Hodgkins Lymphoma, a blood cancer.

Though frightened by the diagnosis, the newlyweds hit the cancer head on.

Kayla’s doctors began aggressive chemotherapy, injecting the powerful, cancer-killing medicines directly into her bloodstream through a port implanted in her chest. After nearly five months of grueling treatment, the family received good news: Kayla’s cancer was in remission.

She and the family rejoiced. But with that joyful prognosis came a sobering coda. Doctors told her the poisonous drugs that streamed through Kayla’s body would likely induce early menopause, thus ending the couple’s dreams of expanding their family.

Then, just three weeks after doctors told Kayla she would probably never conceive a child again, the crestfallen young mother experienced what she thought was a miracle— she was pregnant!  Kayla and Charles celebrated the news that they were, despite cancer treatments, expecting another child.

During an early visit to her obstetrician, the medical staff performed an ultrasound exam on Kayla. The result shocked everyone in the room. Yes, Kayla was pregnant— four times over!

Technicians found four tiny hearts beating inside a woman who thought her child-bearing years were over. All four fetuses were healthy and growing. Kayla had not been using any fertility treatments; doctors told her the chance of conceiving quadruplets without such drugs is roughly 1 in 700,000.

Overwhelmed with joy and the prospect of bearing four children to round out the Gaytan clan, Kayla and Charles were on top of the world. Her doctors wanted Kayla to try to carry the quads for at least 28 weeks— 32 weeks would be even better, if she was able. (Forty weeks is the normal gestation for a single birth.) She was determined to exceed their best hopes. She told her husband she planned to carry their quadruplets for 34 weeks, and it appeared she was on track to do just that. Everything was going well. The babies were strong and growing by day. Kayla’s blood pressure was normal. All of the medical indicators told doctors her pregnancy was going smoothly.

Other doctors continued to monitor Kayla’s blood for any signs of Hodgkins. Those tests repeatedly came back negative— all the medical checkpoints indicated her cancer was in remission.

It was Kayla herself who figured out something was wrong.

“I know my body well,” she said, “and the swelling in my neck told me something was wrong.”

A biopsy of her lymph nodes confirmed her hunch: Kayla’s cancer had returned. The quads she carried were still healthy— but only 28 weeks along.

The quick return of the cancer told doctors that Kayla needed aggressive treatment, and quickly. But she couldn’t be pregnant while the poisonous chemo concoctions coursed through her veins. After painstaking consideration and consultation with medical teams, the Gaytans and their doctors decided to induce her labor when the quads were 30 weeks along.

Although Kayla had hoped to carry her children for another month, the four births went well. The babies, delivered by cesarean section on December 30th, weighed between 2 and 3 pounds each. Lillian, Victoria, Charles and Matthew continue to strive and grow in the neonatal intensive care unit at Vanderbilt University hospital in Nashville, Tennessee. They’re expected to come home in the middle of February. Kayla restarted her cancer treatment last week.

Somewhat matter-of-factly, she said: “I’ve been given a 50-percent chance of surviving five years because [the cancer] has come back so quickly.”

But this young mother and her soldier husband refuse to believe there is anything but good news ahead.

Knowing she’ll be bringing her babies home from the hospital in a couple of weeks, even while she’s still undergoing treatment, Kayla is inspired. She told Fox’s Jon Scott, “That added pressure helps me to move forward on a daily basis to get through the day and push forward, knowing I have people that need me here….”

A GoFundMe page set up for the familiy four months ago has raised $675,000— a large chunk of the money was raised the past 12 hours, according to a GoFundMe spokesperson.

The road will be long and difficult at times. But with six children and a devoted husband counting on and supporting her, Kayla is determined to beat the cancer and live.

Jon Scott currently serves as the anchor of FOX Report (weekends 6PM/ET). In this role, Scott highlights the latest developments and breaking news in the U.S. and around the globe.