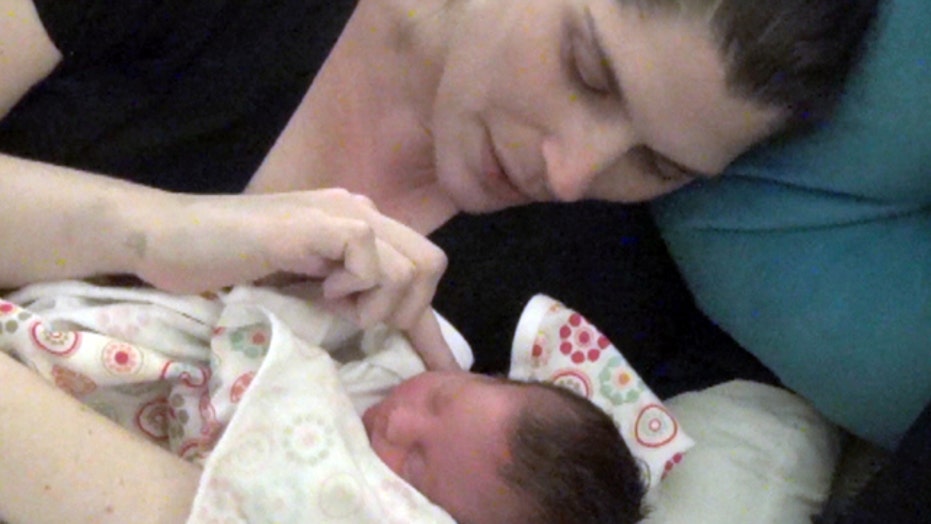 Dr. Manny talks to producers Christopher Henze and Dominique Debroux about their documentary ’40 Weeks’, which tells the tale of 13 moms-to-be during their pregnancies. One of these moms, Elizabeth Joice, opted out of cancer treatment to save her baby. She died 6 weeks after his birth.

When Max and his late wife, Liz, decided to participate in a documentary chronicling 13 families’ pregnancy journeys, they simply thought they were participating in an effort to shed light on the trials, tribulations and joys that come with conceiving and growing a child.

But when Liz Joice was diagnosed for the second time with undifferentiated sarcoma— a very rare cancer of the tissues that usually occurs in childhood— 13 weeks into her pregnancy, and then died six weeks after giving birth to their daughter, the footage soon took on a whole new meaning.

“I always want you to know how important you are— you’re bigger than me. She’s bigger than me,” Liz tells her unborn daughter, Lily, now 1, in footage included in the documentary “40 Weeks.”

Liz’s sacrifice made international headlines in spring 2014, when she succumbed to her cancer at age 36, but now, as Max, 35, raises Lily, he plans to use the video to teach his daughter about the mother with whom she shared too little time.

‘We saw ourselves as survivors’

Max and Liz met on election night 2008, and bonded over a love of politics and food culture. They each had rocky childhoods and saw one another as survivors.

Over Labor Day weekend in 2010, Liz was diagnosed with undifferentiated sarcoma. Max proposed the same day.

“We wanted to get married quickly given that she was afraid of losing her hair, and also on the practical side, we wanted me to be able to advocate for her more while she was going through treatment,” Max said.

Liz underwent chemotherapy, befriending other patients and inspiring them to stay strong, her husband recalled.

“She had the highest tolerance for pain and discomfort,” Max said. “One of the things that was so amazing was how positive she was— and there’s a lot to be said for how that helped her respond to the treatment.”

In spring 2011, Liz was cleared of cancer— but the treatment had induced early menopause. Her OB-GYN said there was “no way” she would ever get pregnant.

About two years later, Liz asked Max to go into the bathroom, saying she remodeled it as a surprise. When he walked in, he spotted two home pregnancy tests sitting by the sink. There were two tiny blue lines on each.

“Our minds were blown,” Max said. “We sort of felt like we deserved a miracle after what we’d been through, and we’d got it.”

Liz enjoyed every moment of growing a new baby, and Max was equally overjoyed.

“[Pregnancy is] harder on some women than others,” Max said, “There was rarely anything negative, and she was so happy throughout the whole time.”

While pregnant, Liz had frequent morning sickness, which reminded her of chemo side effects, but she didn’t think much of it— until she found a lump in her back in the same place as her previous tumor. It was then that everything shifted into focus.

“It was like the world’s cruelest joke,” Liz described in “40 Weeks.”

“She had a lot of guilt, not just with me but for putting everyone through it,” Max said. “And it was misplaced because she had nothing to feel guilty for.”

“Anger” was a useless emotion, Liz would always say. Instead, she channeled her positivity and focused on her and Max’s unborn child.

“I got a lot more reasons to fight now than I did before, and I did a pretty good damn job the first time, so I don’t expect this will be any different,” she said in the video. “I’m in mama bear mode— you’re messing with my cub, and I’m gonna take you out.”

Shortly after Liz learned she was pregnant, they were recruited for “40 Weeks,” a documentary featuring diverse women sharing their pregnancy stories.

Director Christopher Henze said he felt a personal connection with all the couples who are featured in the film, but that he felt an “elevated bond” with the Joices.

“They were just so open, and generous, and beautiful, and caring and smart,” Henze told FoxNews.com.

According to Lisa Singer, the “40 Weeks” casting director and Liz’s former running coach, her friend didn’t see cancer as a major complication.

“Even in her worst of times, even when she didn’t have her hair— every single thing, it wasn’t the end-all for her,” Singer said. She would say, ‘It’s OK, it’s a little blip in my life,’ and I truly thought she would beat it.”

‘She put a lot of faith in herself’

Liz planned to undergo surgery to have the tumor removed but also would need treatment to fully eradicate the cancer. But the contrast dyes used for full-body MRIs to determine whether the cancer had spread posed a big risk: possible damage to the fetus.

Various doctors gave Liz and Max three options: to continue the pregnancy without treatment and hope it didn’t spread; to terminate the baby and immediately begin chemotherapy; or to undergo chemotherapy during the pregnancy, which also risked harming the fetus.

“Liz put a lot of faith in herself and her ability to fight, and she was really hopeful it would turn out like the first time,” Max said.

In November 2013, Liz had the tumor surgically removed from her back, but she and Max chose to skip more invasive treatment to avoid possibly hurting the baby.

But around 33.5 weeks into her pregnancy, an X-ray scan showed that cancer had returned, spreading to her lungs, providing visual evidence for Liz’s increasing trouble with breathing. Doctors moved up her C-section six weeks so she could undergo treatment immediately, and on Jan. 23, Liz gave birth to baby Lily.

Further scans after Liz gave birth revealed the cancer had spread to her abdomen and her heart.

The first-time mom got six weeks with her daughter— a time Max described as “hellacious, certainly being at both ends of the spectrum, being so ecstatic and happy and amazed, but terrified and sad and scared.”

On March 9, 2014, Liz passed away after losing her battle with undifferentiated sarcoma. The “40 Weeks” crew followed her and Max right up to Liz’s labor, when she gave birth to Lily— delivered weighing 4 pounds, 3 ounces— at week 33 in Liz’s pregnancy. The camera crew also captured the family at home after Lily spent three days in the NICU.

In “40 Weeks,” which was released on DVD in December 2014, the Joices discuss how fortunate they felt that they were able to bring Lily into the world.

“A lot of people never get to experience the kind of love that we had for Lily and for each other … and even though it didn’t end how we wanted it to, not everybody gets to experience what I did,” Max told FoxNews.com.

Singer always knew her friend would be an inspiration for cancer patients who feared they wouldn’t have children, but she never expected Liz’s story to turn out this way.

Henze and Debroux have made videos to help Lily learn about her mom as she grows up.

“Everything happens for a reason,” Singer said, “and maybe the reason that I cast her in the movie is that [Lily is] able to have all this footage of her mom. And Max will always be able to remember them as a couple and the happy times, and Lily will always know how much her mother loved her and that she gave up her life for her.”

In the future, the footage will play an important role in Lily’s life, Max said.

“It was unspoken that she wanted Lily to know how much her mother loved her,” he said, “and was willing to sacrifice for her and how much good came out of that sacrifice.”

In honor of Mother’s Day, on Saturday, May 9, Big Belli— a virtual community for expecting mothers that was created by Henze and his wife, co-producer Dominique Debroux — is hosting a fundraising walk in New York City in honor of Liz Joice. Donations from the second annual event will benefit The Sarcoma Foundation of America.