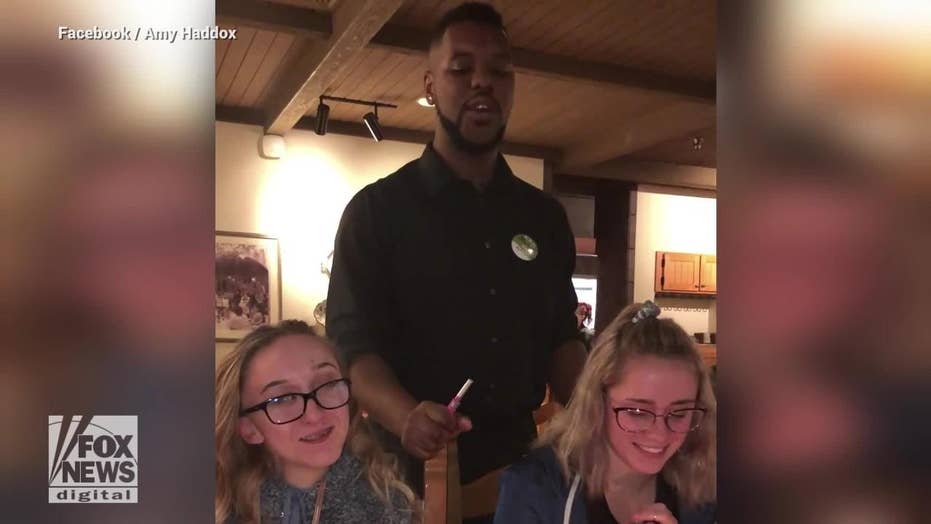 A pair of 17-year-old twins in Washington were treated to a stunning rendition of 'Happy Birthday' by an Olive Garden waiter. The girls, expecting a 'cheesy' restaurant performance, were instead enchanted by the waiter's voice.

A Washington mom and her twin daughters were in for quite a shock when an Olive Garden waiter came over to sing “Happy Birthday” to the 17-year-olds and gave a rendition that left the entire restaurant quiet.

Amy Haddox told Fox News she and her husband had taken their twin daughters, Hannah and Ella, to the Kennewick Olive Garden to celebrate the girls’ birthdays.

“The restaurant was packed,” Haddox said. “It was a busy restaurant on the Saturday night of a holiday weekend.”

So when the group settled in to have a birthday celebration, they weren’t expecting much beyond a quick and “cheesy" song -- "a 'Happy-Birthday’-from-a-restaurant kind of thing,” Haddox said.

However, that was far from what they received when waiter Alphonso “Alphy” Nichols walked over.

“When he started singing, we were like holy crap,” she said. “It definitely was not what we were expecting.”

“The restaurant was silent. You could hear a pin drop,” she continued. “Everyone stopped what they were doing to listen.”

Haddox said she was not aware of Nichols -- or his incredible voice -- but others in the area are, as he routinely shows off his amazing talent singing “Happy Birthday” for patrons who come in.

“Literally right after he was done, another table said they had a birthday,” Haddox said.

Haddox shared the video on Facebook, where it went viral. Many commented on how enchanted they were by Nichols’ voice.

But none were more impressed than those at the restaurant, including Hannah and Ella.

“There was tons of cheering and applause,” Haddox said. “He was very humble. He wasn’t looking for any accolades. He sang and then walked away.”

“It was special,” she added. “Even if he did do it for everyone, you could just see it in [the girls’] faces how special they felt and how amazing they thought he was.”

According to the Tri-City Herald, Nichols is known to the community for his singing prowess. In 2017, he was reportedly signed to local label West Coast Records. He also hosts a YouTube channel where he uploads his music.