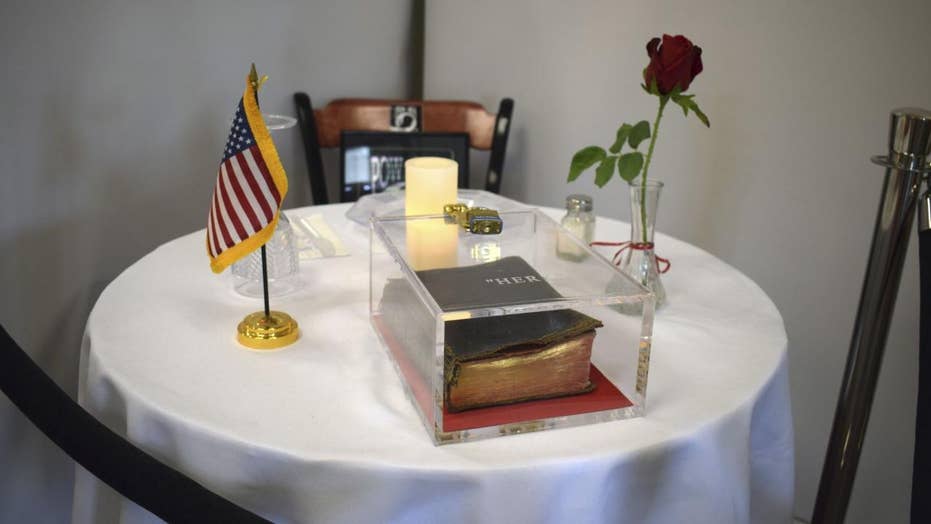 The ruling failed to end a months-long fight over a Bible display that prompted even Vice President Mike Pence to chime in.

MANCHESTER, N.H. – A lawsuit over a Bible on display at a memorial for POWs at the Veterans Affairs Medical Center can move forward, a federal judge ruled Wednesday.

The ruling failed to end a months-long fight over a Bible display that prompted even Vice President Mike Pence to chime in.

The Bible, which sits on the "Missing Man Table" at the Manchester VA Hospital, was donated by a former POW in a German prison camp who is now 100 years old, the Union Leader reports.

But U.S. Air Force veteran James Chamberlain – who is a Christian himself – said it offended him every time he walked past it at the hospital and sued in May with the assistance of the Military Religious Freedom Foundation. The organization also bought a billboard in downtown Manchester calling on President Trump and Vice President Pence to “Remove the Bible, Honor All Veterans.”

A billboard calling on President Trump, Vice President Pence, and the VA to take the Bible out of the hospital on display in downtown Manchester, N.H.   (Rob DiRienzo | Fox News)

"Based upon Jim's beliefs and his service to our country and his Christianity," Chamberlain's lawyer, Lawrence Vogelman, said outside the courthouse, "he thinks excluding people is just wrong."

Judge Paul Barbadoro said in his decision not to toss the lawsuit that any case involving alleged religious freedom violation requires a “highly fact-specific analysis." There was also a legal debate over whether or not Chamberlain could claim "injury" over the Bible's presence since he himself is Christian. Vogelman argued that it was, in fact, a violation of his beliefs not to include other religions.

"My client seriously believes that it diminishes him as a veteran and as a Christian to exclude those other people that he served with," Vogelman said.

In May, after Chamberlain's initial complaint, the VA center quietly removed the Bible from the memorial only to return it to the memorial following an outcry from other veterans at the hospital.

Vice President Pence sent a firm message to the Manchester VA hospital in remarks he made last month at The American Legion’s national convention in Indianapolis.

“You might’ve heard even today that there’s a lawsuit to remove a Bible that was carried in World War II from a Missing Man Table at a VA hospital in New Hampshire,” Pence said. “Let me be clear: under this administration, VA hospitals will not be religion-free zones.”

At the hearing on Wednesday, several veterans showed up at the hearing to show support for the VA – and the Bible's presence in it.

"The Bible on the Missing Man Table represents something that the actual POWs clung to to survive," said Quinn Morey of the Northeast POW/MIA Network.

Veteran Quinn Morey showed up at the hearing Wednesday in support of keeping the Bible at the VA hospital.  (Rob DiRienzo | Fox News)

Morey's group is one of several that maintains the memorial at the hospital with the VA's permission. He said Chamberlain is the first to complain about it.

"If any of the MIAs or POWs were offended by a Bible being on the Missing Man Table," Morey said. "They would have contacted us or come to the VA."

Chamberlain's lawyer maintained that the lawsuit is about honoring all POWs and MIAs equally.

"The reality is that not all of them are Christian," Vogelman said. "Every faith, every creed are among the MIA and POW. We are not a Christian nation. We are not a religious nation."

After hearing what some of his friends went through, Morey said he strongly disagrees with that idea.

"The Bible got the POWs through their horrible captivity," Morey said. "It would actually be an affront to them if it were not represented at the Missing Man table."

Both sides will meet with the judge within the next few weeks to discuss the next steps. After that, oral arguments are expected to begin.