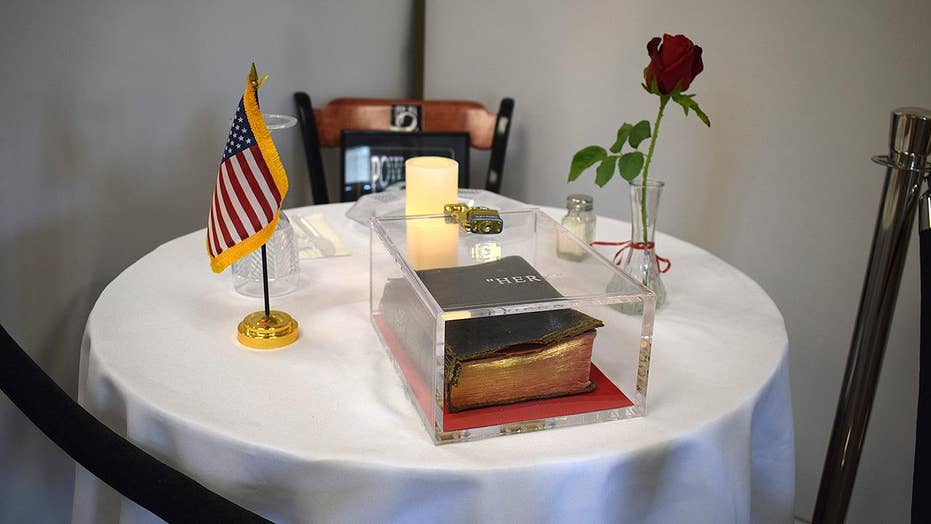 The Military Religious Freedom Foundation is calling the display 'repugnant.' The First Liberty Institute's Mike Berry, who represents the group that donated the Bible, reacts.

Vice President Mike Pence took a shot at the Obama administration on Wednesday in his defense of a Veterans Affairs Bible display.

“You might’ve heard. ... There’s a lawsuit to remove a Bible that was carried in World War II from a Missing Man Table at a VA hospital in New Hampshire,” Pence told the American Legion national convention in Indianapolis. “It’s really no surprise because, under the last administration, VA hospitals were removing Bibles and even banning Christmas carols in an effort to be politically correct.”

Pence, the son of a Bronze Star recipient from the Korean War and the father of a Marine, said the Department of Veterans Affairs under President Trump is not a "religion-free" zone, The Indianapolis Star reported, referencing a lawsuit filed by the Military Religious Freedom Foundation.

“And my message to the New Hampshire VA hospital," Pence told the crowd, "is the Bible stays!”

PASTOR WHO LOST CHILD IN CHURCH MASSACRE RUNNING TO BRING HUMANITY, NOT GUN CONTROL, BACK INTO POLITICS

The Department of Veteran Affairs press secretary, Curt Cashour, told Fox News in May that the VA would not back down over the lawsuit.

"This lawsuit – backed by a group known for questionable practices and unsuccessful lawsuits – is nothing more than an attempt to force VA into censoring a show of respect for America’s POW/MIA community," Cashour said. "Make no mistake: VA will not be bullied on this issue."

"We are grateful to you and President Donald J. Trump for consistently defending our religious freedoms," wrote Graham, the president and CEO of the Billy Graham Evangelistic Association.

His comments were made shortly after the Democratic National Committee on Thursday decried defenders of "religious liberty" in a resolution in support of nonbelievers.