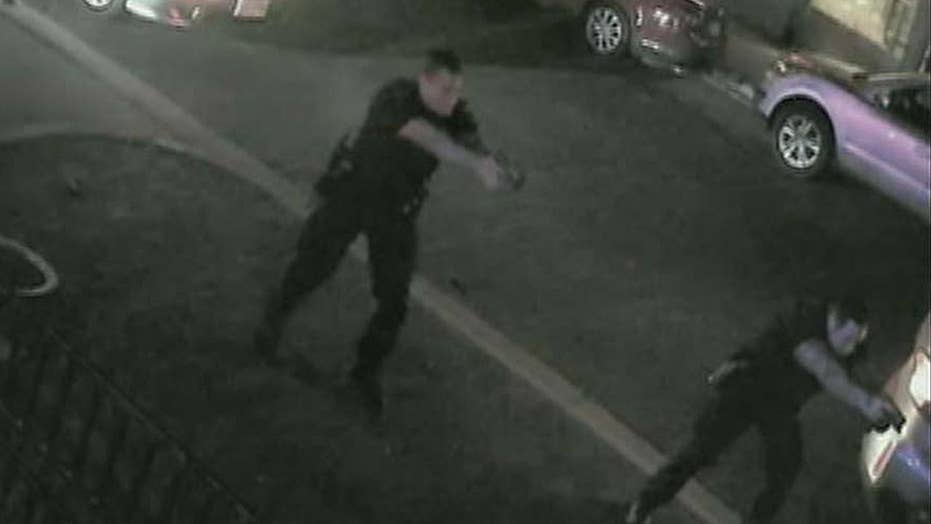 Authorities in Ohio can be seen racing into action in surveillance video showing the chaotic moments when the gunman -- who ultimately shot nine people dead -- opened fire early Sunday in a Dayton neighborhood full of bars and restaurants, sending revelers scrambling.

Dayton Police Chief Richard Biehl released the videos during a news conference Sunday afternoon that showed officers engaging 24-year-old Connor Betts -- who was armed with a .223-caliber rifle with magazines capable of holding at least 100 rounds of ammunition -- seconds after he opened fire at 1:05 a.m. in Dayton's bustling Oregon District.

Officers can be seen responding to the shooting in Dayton early Sunday. (Dayton Police Department)

"Had this individual made it through the doorway of Ned Peppers, there would have been catastrophic injury and loss of life," the chief told reporters.

The videos showed officers pursuing Betts around the corner of a restaurant, engaging him and stopping him at the doorstep of Ned Peppers.

"In most situations, we don't see this type of reaction," Former Secret Service agent and law enforcement analyst Evy Poumpouras said on "Fox & Friends." "The officers happened to be near and they happened to be able to respond. We were fortunate in this situation."

Poumpouras added that the video showed "the bravery and heroism" of the police response.

“We're seeing so many more of these, police are having to adjust and go into these situations and respond, it's a really difficult time to be in law enforcement right now,” she added.

Dayton Mayor Nan Whaley told "America's Newsroom" on Monday that five of the six officers had only been on the police force for three years or less. Whaley described the officers to Fox News' Sandra Smith as "really well trained."

"If they had not been there, the shooter would have gotten into an establishment and hundreds would have been dead on Sunday morning instead of nine,” she told Fox News.

Among the videos released by police on Sunday afternoon include the moment when shots initially rang out, and another that showed those nearby scrambling for cover in bars and restaurants.

Shoes are piled outside the scene of a mass shooting including Ned Peppers bar, Sunday, Aug. 4, 2019, in Dayton, Ohio. (AP Photo/John Minchillo)

Some people fled so far from the scene, their shoes fell off and could be seen in a pile the following morning on the street outside the bar where the rampage came to an end.

Authorities have not revealed whether Betts specifically targeted any of the victims, including his 22-year-old sister, Megan, the youngest of the dead.

While the gunman was white and six of the nine killed were black, police said the quickness of the rampage made any discrimination motive in the shooting seem unlikely. Biehl, however, said any attempt to suggest a motive so early in the investigation would be "irresponsible."

Conflicting accounts of the shooter have emerged, with some former classmates saying Betts was reportedly suspended during his high school years for compiling a “hit list” of those he wanted to kill and a “rape list” of girls he wanted to sexually assault.

Police have said there was nothing in Betts' background that would have prevented him from buying the rifle used in the shooting. They said they also found a shotgun in his car. Federal and local authorities searched a home Sunday linked to Betts in the town of Bellbrook, located about 15 miles south of the scene of the shootings.

At least 15 of the 27 more people known to have been treated for injuries had been released, according to city officials. Some suffered multiple gunshot wounds and others were injured as they fled, hospital officials said.

The shooting in Ohio came fewer than 24 hours after at least 20 people were killed at a Walmart in El Paso, Texas.