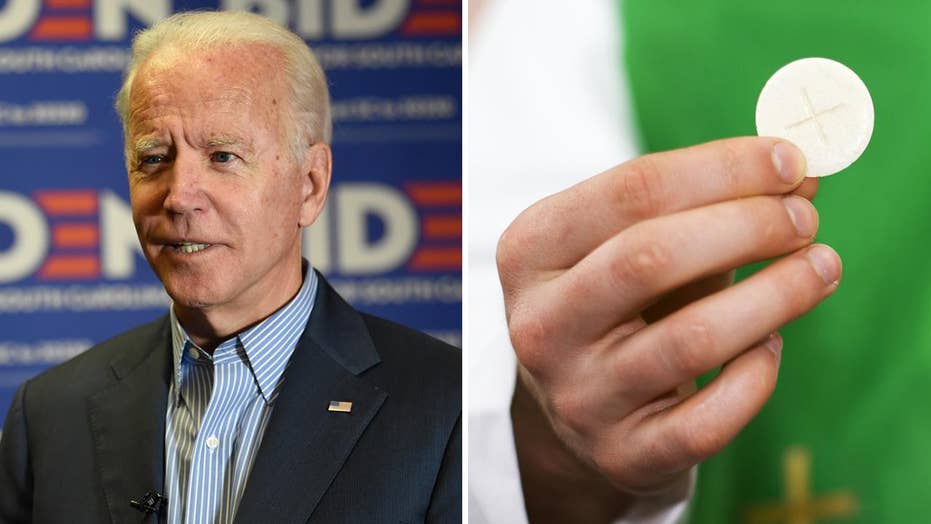 Former Vice President Joe Biden, while at Mass in South Carolina this week, was denied Holy Communion by a Catholic priest because of his support of abortion. Rev. Robert E. Morey said his actions were based on Church law but will this hurt Biden politically as he strives to be the Democratic presidential nominee? Here to debate are Christopher Hale and the Rev. Frank Pavone.

There was controversy this week over a Catholic priest refusing to let Democratic presidential candidate Joe Biden receive Holy Communion because of his support for abortion. Non-Catholics may wonder what all the fuss is about, but Communion -- the receiving of the Body of Christ -- is a sacrament central to Catholicism and all of Christianity.

In a statement, the Rev. Robert E. Morey of Saint Anthony Catholic Church said: "Any public figure who advocates for abortion places himself or herself outside of Church teaching. ... I will keep Mr. Biden in my prayers."

Morey's action is based on Church Law, or Canon Law, No. 915.  Canon lawyer Fr. Gerald Murray told Fox News, "I applaud the priest who did this ... because he himself took seriously his obligation in Canon Law and also in the sight of God."

When asked about being denied communion, Biden said, “It’s part of my personal life,” and he defended himself as a good “practicing Catholic.”

Back in September, the Rev. Frank Pavone, founder and national director for Priests for Life, wrote an open letter to Biden urging him to live by his faith.

“The basic point I'm making is that it's not just that it's against the Catholic faith, it's against the very meaning of public service because we are talking about the killing of a human being," Pavone told Fox's "A Spirited Debate." "And the tens of millions of Americans are trying to live out their faith by saying we have to protect the unborn. And then they're seeing public officials claiming to want to have the benefit of being known as a Catholic and not defending the unborn."

But not all Catholics concur. Christopher Hale, a former faith adviser for President Barack Obama and a Catholic, points out that back in March of 2013, when  Pope Francis was installed as the bishop of Rome, he invited both Biden and Nancy Pelosi – she's also Catholic -- to receive Communion. Hale said, "Look, Pope Francis says it so beautifully. The Eucharist [the Body of Chris] is not a prize for the perfect, but medicine for the sick."

Other Catholics have agreed. Chicago Archbishop Cardinal Blaise Cupich in July defended the giving of Holy Communion to pro-abortion politicians, saying, “I think it would be counterproductive to impose sanctions, simply because they don’t change anybody’s minds.”

But Murray believes it’s unfortunate that there’s such a division in the church over something that was meant for unity. In denying Communion to staunchly pro-choice politicians, he said, “It’s really for their spiritual benefit because we’re calling them to conversion.”

The Communion meal dates back to Jesus himself and what he said at the Last Supper. He broke bread and gave it to his disciples right before his arrest and crucifixion, saying, “This is my body, which is given for you. Do this in remembrance of me.” [Luke 22: 19-20]

While Christians have disagreed on whether or not this meal is a symbol of Jesus’ body or the transformation of the bread into his actual flesh, they do agree it’s the cornerstone of the faith and essential to being a believer and follower of Christ.

But after that, Jesus is silent on who should or should not receive it.