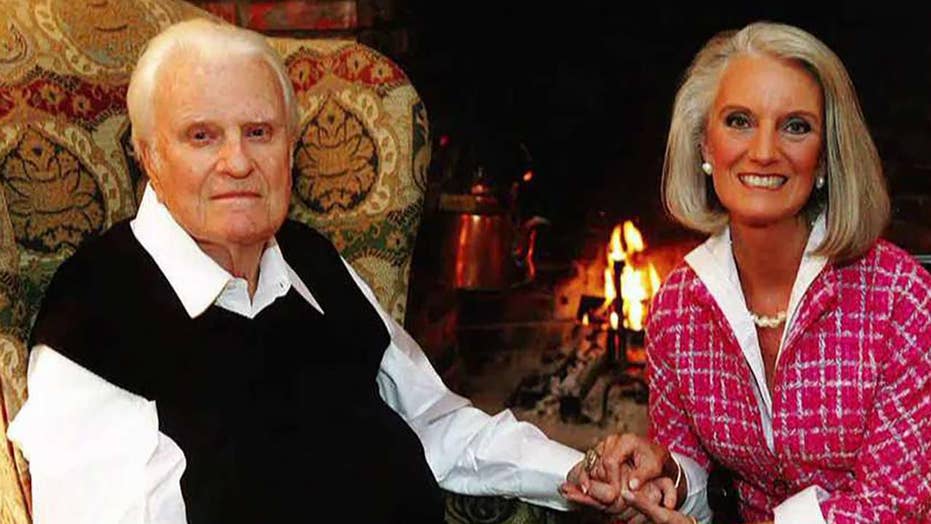 Anne Graham Lotz, founder and president of Angel Ministries, shares journey of faith in Jesus in Me: Experiencing the Holy Spirit as a Constant Companion.'

The late Rev. Billy Graham called his daughter "the best preacher in the family."

Now, Anne Graham Lotz, the founder of AnGel Ministries, discusses the comfort of the Gospel in her first book since his passing.

Lotz grew up in a family that influenced the world of Christianity but she told Fox News she didn't learn as much about the Holy Spirit until more recently, something she hopes to pass on in her new book, "Jesus In Me."

"My prayer is that people will learn that the Holy Spirit is available to be your constant companion," Lotz told "Fox & Friends" Monday.

She has been through a lot of loss and pain in the last few years--from her husband's death after 49 years of marriage to the passing of her father, known as "America's Pastor," and just six months later, battling breast cancer. Lotz says loneliness knocked at her door but she never let it in because of her close relationship with the Holy Spirit.

"He's not just someone for benedictions and baptisms. You know, I baptize you in the name of the Father, Son, and in my church, it was called the Holy Ghost - you know a little offputting -- it wasn't until I was a young adult that I learned more fully of who he is."

"He guides you, comforts you, helps you, stands by, strengthens you, so he's a wonderful person," she added. "He's a member of the Godhead, so he is God, when you put your faith in Jesus, when you confess your sins, turn away from your past, ask Jesus to be your savior, the Holy Spirit comes into you, so I have the spirit of God living on the inside of me to be there 24/7."

Lotz explains in her book about several misconceptions like the Holy Spirit being a dove, a flame of fire, or an "it," but the Bible calls him a person, like Jesus, but invisible.

"I think some of those misconceptions, people like me within the church, just haven't been taught," she said.

She said her "Aha moment" when she was studying about the Holy Spirit, was learning that "he loves me."

Lotz was reminded of her father's impact when she was diagnosed with breast cancer last year and she had people around the world praying for her.

"The fact that I'm my father's daughter made that even more worldwide, so in a sense, Daddy, even though he's gone, was still helping me."

She says Billy Graham calling her the best preacher in the family was a way of "blessing" her.

"I know because nobody's better than him," Lotz said. "If you judge preaching by the response to it, he's in a league by himself, but the fact that he said that and there was a lot of controversy about women in ministry, and there was a lot of controversy in his denomination. He was a Southern Baptist. That was just his way of putting his hand on me and saying, 'My daughter's a great preacher.'"

Lotz said her message Sunday morning at Times Square Church in New York City -- given that one in five adults is so desperately lonely and has suicidal thoughts -- really resonated and people just started to weep.

"His presence within keeps you from being lonely, and if he can do that for me, he'll do it for anybody, you just have to come to him."