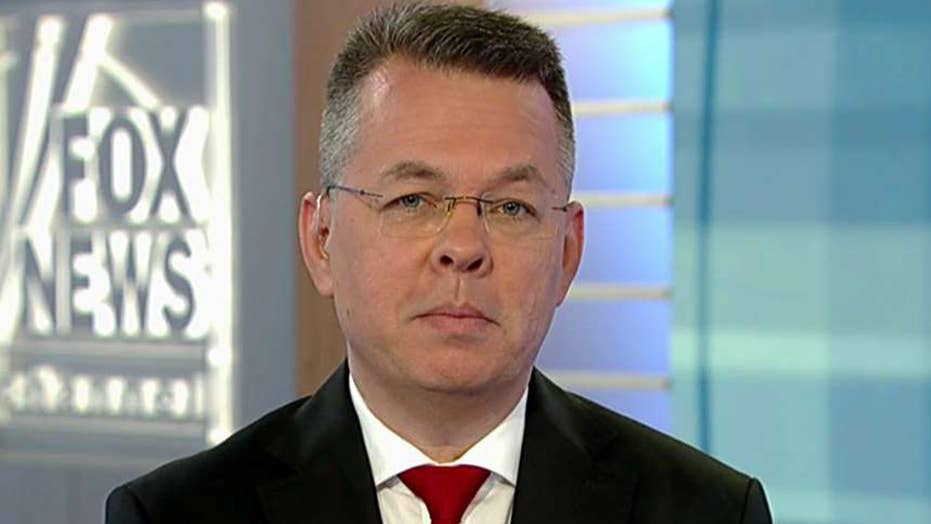 Pastor Brunson, wife say suffering was 'worth it'

Pastor Andrew Brunson and his wife Norine speak out on 'Fox &amp; Friends' on how they got through his two-year imprisonment in Turkey.

American pastor Andrew Brunson, whose new book shares his gripping story of being held as a political hostage for two years in Turkey, told Fox News about a dream he had in prison in December 2016 that he fears has proven prophetic in recent days as Turkey has launched a brutal assault in northern Syria.

"My goal is about declaring who Jesus is and not getting involved in politics, but this is the dream God gave me, and I think it's relevant to what's happening now," said Brunson.

"In the dream, Turkey, Iran, and Russia began to move together in a very dark alliance," he shared.

Brunson woke up from the dream sweating and gasping for air. He later told his wife, Norine, she had to get him out of the Turkish prison before it came true, but it was very counterintuitive. Turkey and Iran had been historic enemies and Turkey and Russia were on opposite sides of the conflict in Syria.

President Donald Trump prays with American pastor Andrew Brunson in the Oval Office of the White House, Saturday October 13, 2018, in Washington. Brunson returned to the U.S. around midday after he was freed Friday, from nearly two years of detention in Turkey. (AP Photo/Jacquelyn Martin)

The North Carolina native shared it with the American consul and a high State Department official who told him, "that's impossible because it's in Turkey's interest to be aligned with the West." Brunson replied, "Well, that may be true and this is what God showed me and what can I say?"

A few days after Brunson's dream, a Turkish policeman assassinated the Russian ambassador to Turkey. Yet instead of driving Turkish President Recep Tayyip Erdogan and Russian leader Vladimir Putin apart, Brunson said the killing seemed to bring them closer. In the three years since, Brunson believes his dream has increasingly become reality.

"The dream has happened," he said. "Turkey is moving away from its Western alliances and moving in the opposite direction."

Brunson and his wife spent 25 years in Turkey as missionaries in the largest un-evangelized country in the world, working with refugees on the Syrian border, many of which happened to be Kurdish.

"We are deeply concerned about this ... Obviously we want peace in the region," he said.

But Brunson believes the conditions in Turkey point to another thing God had spoken to him about: a great spiritual harvest that would come to the country.

"I believe my imprisonment was prepping for harvest with all this prayer coming," he said. "Our desire is that there will be a great move of God, and we believe it is coming. I also think the difficulties in the country right now will lead many to question things they've never questioned and many will begin to turn to Jesus." 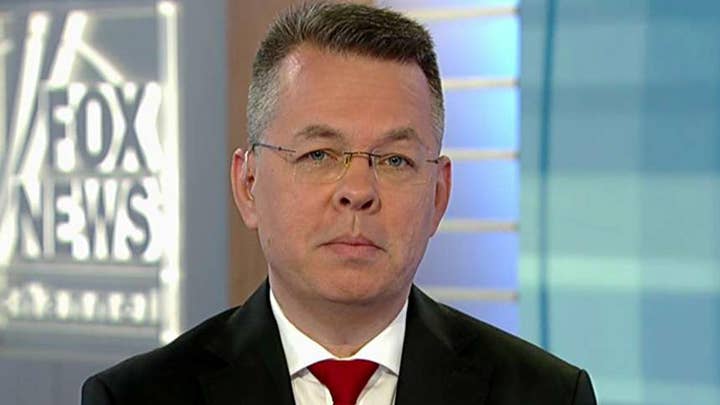 Speaking to Fox News from Kansas City, at the International House of Prayer, a 24/7 prayer house, Brunson reflects on his time imprisoned in Turkey and is thankful for his freedom. A year ago, he sat in the same chair Erdogan once did, opposite Trump in the Oval Office, before kneeling down to pray for the president. He found that moment both "very surreal" and "amazing."

"Freedom is so beautiful," he said, "And it's the small things. Sitting on a bench with my wife, having breakfast with her. It's not the big things that were completely stolen away when I was in prison...I didn't get to talk to my oldest son for two years."

Brunson said he wakes up every morning and "the only thing that matters is what Jesus says about me and thinks about me on the day I stand before him, and then I try to live according to that."

Brunson candidly shares the low, hellish moments -- doubting God's existence, facing suicidal thoughts, and telling God he chose the wrong man -- in "God's Hostage: A True Story of Persecution, Imprisonment, and Perseverance," which comes out Oct. 15. In the book, he recalls facing a turning point during his 735 days in the maximum-security prison.

"I came to a point where I said God chose the right man because he wanted a weak man who will be able to help other weak people," he said. "So I'm very aware I broke a number of times in prison but God strengthened me and he did rebuild me."

Accused of espionage and other charges, Brunson decided to use his time in court as "holy defiance." And while he doesn't consider himself as a hero, he says God used him as an example.

"It was very obvious this was a kangaroo court," he said of his trial. The decision was "completely and entirely in the hands of one person, who is the president (Erdogan)," so Brunson took the opportunity to share his faith.

"They're saying I'm a terrorist. No, I'm not," he said. "I'm declaring Jesus Christ, and I want all of Turkey to know I'm here for one reason: to declare Jesus...Blessed am I for persecution."

In a large courtroom that was once a basketball court, Brunson stood alone, facing his accusers on a platform, against a hostile government, unsure of the outcome. "But when I made those declarations, Jesus was standing right beside me," he added.

On the cover of the book, the pastor holds a cross over his hand on his heart, a photo he took for wife and kids, to show them "this is what I stand for. This is my identity...it was actually one of my happiest moments in prison because I was standing on my identity as a Christian."

And today, after all he has been through, he has an urgent message on his heart that he wants to share with the next generation.

"It's becoming more difficult to stand for Jesus...and I just feel this burden to encourage the next generation to stand without apology for Jesus, and obviously there can be a cost to this, but I think it's necessary and Jesus is worthy of it," the missionary shared.

The Brunsons are eager to get back into missionary work.

"It's very much on our hearts," he said. "We still desire to declare Jesus to our Muslim friends, and we cannot do that in Turkey now. We cannot do that under this regime but we hope we can someday visit Turkey again."