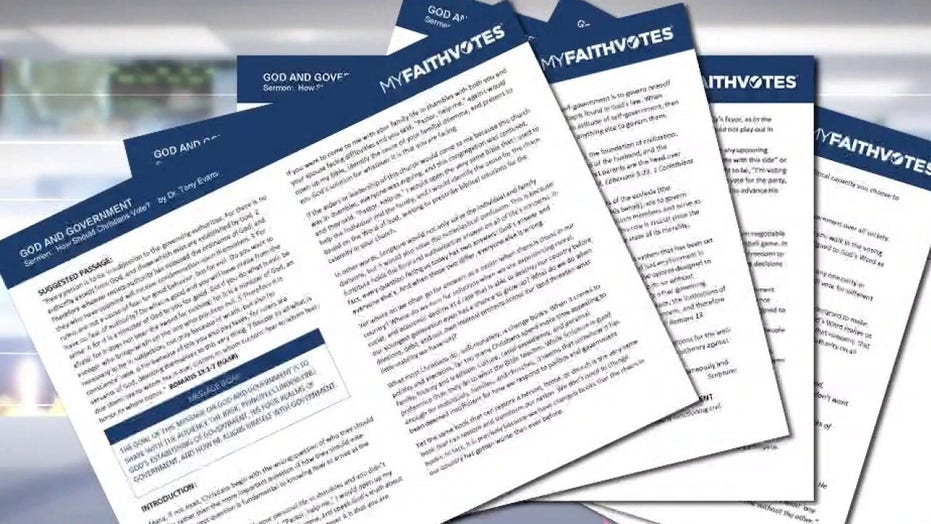 President Trump may have carried White evangelical voters handily in 2016, but a new initiative aims to urge as many Christians to vote as possible, especially amid worries about voting during the coronavirus pandemic.

Our Church Votes, an outgrowth of My Faith Votes, is a bipartisan nationwide campaign that seeks "to encourage church attendees to register to vote in upcoming national and local elections and to educate themselves on the issues most important to people of faith."

"Additionally, many Christians are concerned about renewed threats against religious freedoms, revealed by the pandemic," Yates added.

The group is trying to inspire more believers to put their faith in action, claiming that one out of every four Christians does not vote in presidential elections and even more skip state and local elections.

"Voting is non-negotiable for Christians because that's how we keep faith and freedom in the heart of America. The minimum thing any church must do is to facilitate voter registration even if they don't speak of any issues. In many states important elections are decided by fewer than 10,000 votes," Yates said. "Churches alone can make all the difference."

The Rev. Johnnie Moore, chairman of Our Church Votes, told Fox News that evangelicals will decide the election "either by turning out in record numbers or by taking their vote for granted."

"There isn’t a state in America where a community of churches alone cannot make all the difference. When evangelicals vote they don’t just vote to preserve their freedoms they vote for First Amendment freedoms for all Americans," Moore said. "Freedom itself is on the ballot in November, as the allure of socialism increasingly threatens our country’s future.”

Well-known Christian author, David Jeremiah, said he's not sure if he can find someone to vote for that's like him or for him, "but I'm pretty sure I can get someone who's not against me," he said in a PSA for the group.

The Rev. Samuel Rodriguez, president of the National Hispanic Christian Leadership Conference, urged in another PSA to "change America, in Jesus' name."

"When I enter that voting booth, I'm going to vote as a Christian. A Bible-believing, Christ-following Christian first and foremost," he said.

At the end of June, 72 percent of White evangelical Protestants approved of Trump's handling of his job -- a slip from 78 percent in April, according to a poll released by the nonpartisan Pew Research Center.

Former Vice President Joe Biden, the presumptive Democrat presidential nominee, isn't aiming to win the evangelical vote, but his campaign sees it as an opportunity.

Michael Wear, who directed faith outreach for President Barack Obama's 2012 reelection, told CNN: "If Joe Biden gets 23 percent or higher of the White evangelical vote, he wins this election."