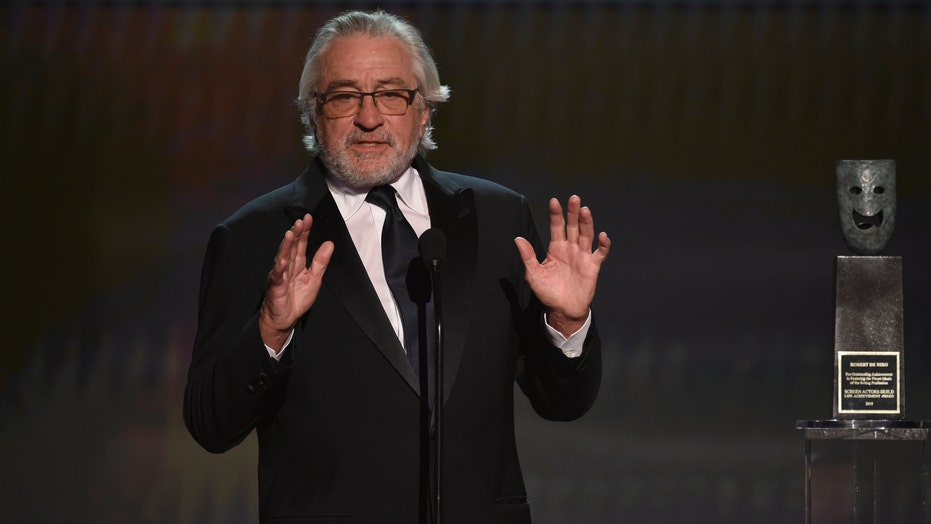 Robert De Niro used a portion of his time at the 2020 Screen Actors Guild Awards to seemingly take aim at President Donald Trump and encourage others with celebrity influence to do the same.

The 77-year-old actor spoke while accepting the coveted lifetime achievement award Sunday, where he was praised for his illustrious career with a lengthy applause break from the many stars and celebrities in attendance.

De Niro, who is an outspoken critic of the president and his administration, spent some time voicing his political opinions.

“There's right and there's wrong, and there's common sense and there's abuse of power,” the actor shared after Leonardo DiCaprio presented him with the award.

About half of the room stood and applauded when De Niro said it was his responsibility to speak about politics and seemingly took aim at Trump, whose name he didn't mention.

“As a citizen, I have as much right as anybody — an actor, an athlete, anybody else — to voice my opinion,” "The Irishman" actor said. “And if I have a bigger voice because of my situation, I'm going to use it whenever I see a blatant abuse of power.”

De Niro became the 56th recipient of the guild's highest honor during the ceremony held at the Shrine Auditorium in Los Angeles.

The actor has been a frequent, and occasionally profane, critic of Trump, but kept his criticism Sunday G-rated. He ended the politics portion of his speech by saying, “That’s all I’m going to say.”

DiCaprio praised the actor for his authenticity during his introduction, saying he's been watching De Niro since the age of 13. DiCaprio recounted how his father, at the time, suggested he pattern his early acting skills after the “Raging Bull” star.

“His specificity in detail and his fearless pursuit of authenticity in his work have influenced not only myself, but entire generations,” said DiCaprio, who co-starred with De Niro in “This Boy’s Life” in 1993. The two will co-star in Martin Scorsese’s upcoming “Killers of the Flower Moon.”

“He has given us career-long explorations of the human conditions,” DiCaprio said.

After accepting the honor, De Niro thanked DiCaprio for his words then said he was ready to get back to work. DiCaprio carried De Niro's award for him while the pair walked off stage, handing it back to his idol once in the wings.

“As actors, we don’t take victory laps,” De Niro said. “We’re too worried about what our next job will be. It makes me very happy to know that my next job will be working with you and Marty. At least I know that I have another year of health insurance.”

De Niro is a two-time Oscar winner for his supporting role in “The Godfather: Part II” and best actor in “Raging Bull.” In 2011, he was also honored with the Golden Globes' Cecil B. DeMille Award for his impact on the world of entertainment and awarded the Presidential Medal of Freedom five years later.

Through his career, De Niro has worked with some of Hollywood's top directors, but he's best known for his collaborations with Scorsese. The veteran actor had his breakthrough performance in Scorsese’s 1973 film “Mean Streets" before their partnership flourished in other standout projects, including “Taxi Driver,” “Goodfellas," “Casino" and “The Irishman.” Those films helped De Niro become known for tough-minded and dark characters who sometimes displayed a violent nature.

Later in his career, De Niro had some light-hearted roles, exploring his comedic persona in films such as in the “Meet the Fockers” and “Analyze That” franchises along with “Joker.”

“Robert De Niro is elemental,” DiCaprio said Sunday. "It feels as if he's always been here, and will always be here."