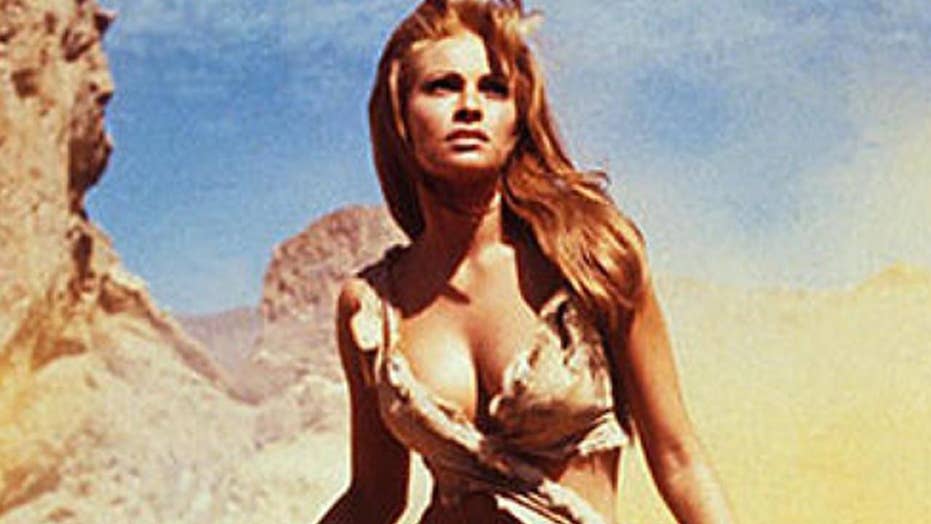 Raquel Welch: I almost died filming 'One Million Years BC'

Hollywood icon Raquel Welch dishes on filming 'One Million Years B.C.' and how her skimpy outfit almost killed her.

Raquel Welch wouldn’t have guessed in a million years that a film about cavemen living with dinosaurs would have made her one of the most iconic sex symbols in American cinema.

For starters, the actress had zero interest in taking on the role of “Loana the Fair One” who was clad in a “prehistoric” doeskin bikini in the 1966 cult classic “One Million Years B.C.,” a remake of the 1940 film.

“I told (Fox’s studio head) Dick Zanuck I didn’t think I was going to do it because it was a dinosaur movie and I didn’t want to be caught dead in a dinosaur movie,” Welch told Fox News. “And he was not sympathetic to that.

"He said, ‘No, you’re going to do it Raquel. And listen Raqui, you’re going to become a huge star!’ I said, ‘What? What am I even going to wear? What happened in dinosaur time?... He said, ‘Don’t worry, they’ll figure something out.' And they sure did.”

Reluctantly, the then-26-year-old, who had already worked alongside her teen idol Elvis Presley in 1964’s “Roustabout,” agreed to take on the role. Welch was sent far away from Hollywood, specifically the volcanic Canary Islands.

“We were so far from civilization,” the now-77-year-old recalled. “I mean, there was a hotel at the bottom of the volcano near the sea. And I was at the top. And it was snowing!”

Welch, who was filmed wearing the skimpy costume during severe weather conditions, developed tonsillitis on set that she insisted became worse with time.

“I had already so much penicillin when I was wearing the fur bikini that I almost died,” she claimed. “… I had to rush, turn my car around and head right back to the doctor’s office, just run upstairs, jump in the elevator and all that.

"And I barely got there. They had to shoot me with an antidote. Otherwise, I would have died. It was really rough shoot, man. Really rough. And then I came to London and everybody knew who I was.”

Welch was shocked by the newfound fame after starring in “One Million Years B.C.”

“I don’t do much in this movie except run around in this outfit!” she said.

Despite her popularity, Welch was determined not to be typecast. She went on to work with some of the most in-demand leading men, including Frank Sinatra, Robert Wagner, James Stewart, Dean Martin and Burt Reynolds.

“I was trying very hard to open up my possibilities as an actress, rather than just a kind of sex symbol,” said Welch. “I was trying really hard to do that and it was really difficult. It was very difficult to make that transition. But eventually I did.”

She eventually earned a Golden Globe for Best Actress in a Comedy after starring in 1973’s “The Three Musketeers.” She revealed it was one of her proudest moments from her career.

“Every single [film] contributed to my [transition],” she explained. “I played a lot of action figures, like in Westerns… I carried a gun, I was a very formidable woman who could handle herself, who could ride and shoot… I also showed myself in a lot of different periods of time… I worked in Spain for a lot of the Westerns, which is where most American Westerns were filmed.”

As for that famous fur bikini? It's still around.

“We had several doubles of it because when it got wet you couldn’t wear it the right way again,” she said. “Nothing really happened to it. I have the ones that were left over, the backups.”

Welch continues to stay busy. Most recently she appeared in a sitcom titled “Date My Dad” where she reunited with Wagner on screen.

“I don’t have any real regrets, and I’m not a bitter person,” Welch said of her career. “I enjoy doing what I do. I chose it because I had always wanted to do it from the time I was a very young girl.