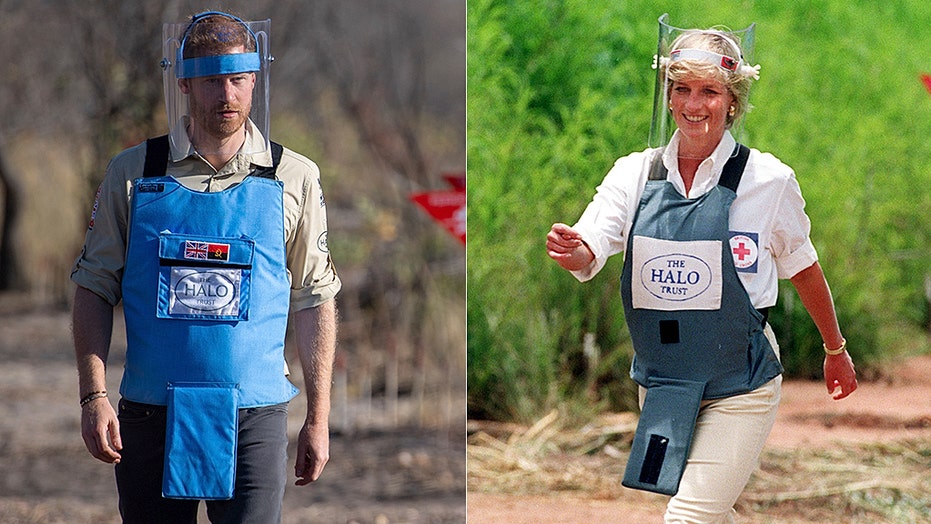 Prince Harry walked through a minefield in central Angola 22 years after his late mother, Princess Diana of Wales.

On the fifth day of his royal Africa tour, the 35-year-old visited a HALO Trust mine site outside Dirico, People magazine reported on Friday. According to the outlet, the British prince detonated a mine and met with members of the community to discover how the demining efforts are benefitting the local population.

“The historic commitment is a key step forward for the movement to rid the world of mines and lay the foundation for a safe and just future for the next generation,” said the Duke of Sussex in his speech. “Landmines are an unhealed scar of war. By clearing the landmines, we can help this community find peace, and with peace comes opportunity.”

Prince Harry walks through a minefield during a visit to see the work of landmine clearance charity the Halo Trust in Dirico, Angola, on Sept. 27, 2019.  (Pool/Samir Hussein/WireImage)

“Later today I will visit Huambo, to see the place where my mother walked through a minefield in 1997,” he continued. “Once heavily mined, the second city of Angola is now safe. With the right international support, this land around us here can also be like Huambo — a landmine-free, diverse, dynamic, and thriving community, connected to and benefitting from all that it has to offer.”

The visit is reminiscent of the time when Diana famously walked through a landmine field in Huambo while wearing similar protective clothing. She met with landmine survivors to raise awareness of the issue globally.

That poignant moment in 1997 was noted on the official Instagram account of the Duke and Duchess of Sussex.

“If an international ban on mines can be served it means, looking far ahead, that the world may be a safer place for this generation’s grandchildren,” the post quoted Diana.

“Today in Angola The Duke of Sussex will retrace his mother’s steps to see the legacy of her work and how her connection with this community helped make the elimination of landmines a reality,” continued the post.

“In 1997 Diana Princess of Wales visited Huambo to bring global attention to the crisis of landmines and the people whose lives were being destroyed. Two decades later, the area has transformed from desolate and uninhabitable to lively and vibrant, with colleges, schools and small businesses.

“The Duke is humbled to be visiting a place and a community that was so special to his mother, and to recognize her tireless mission as an advocate for all those she felt needed her voice the most, even if the issue was not universally popular.

“Princess Diana’s visit helped change the course of history, and directly led to the Convention against Anti-Personal Landmines, also known as the Ottawa Treaty. Today, with the support of @thehalotrust, Angola now has a stated aim under the Treaty to be clear of known mines by 2025. Despite great progress, 60 million people worldwide still live in fear of landmines every day.”

MEGHAN MARKLE APPLAUDS PRINCE HARRY FOR BEING 'THE BEST DAD'

Town & Country reported on Thursday that Harry opened up about the death of his mother during his trip and revealed how visiting Botswana shortly after her passing helped him cope with the devastating loss.

Diana passed away in 1997 at age 36 from injuries she sustained in a Paris car crash.

“I have some of my closest friends here and I came here in 1997 or 1998 straight after my mom died, so it was a nice place to get away from it all. Now I feel deeply connected to this place and to Africa.”