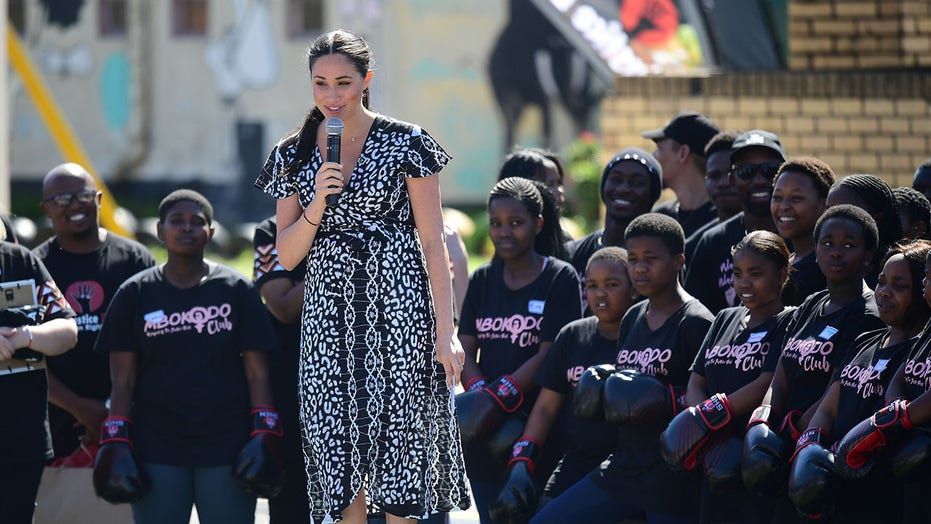 When Meghan Markle says he's the best dad, we know Prince Harry is doing something right.

The royal new parents have made their first stop on their 10-day first royal tour of Africa as a family in Cape Town, South Africa.

On Tuesday, the couple visited an organization that helps local surfer mentors offer mental health support to vulnerable, at-risk kids that live in communities without many resources.

Britain's royal couple Prince Harry and Meghan Duchess of Sussex, greet children on their arrival at the Nyanga Methodist Church in Cape Town, South Africa, Monday, Sept, 23, 2019. It houses a project where children are taught about their rights, self-awareness and safety, and are provided self-defense classes and female empowerment training to young girls in the community. The royal couple are starting their first official tour as a family with their infant son, Archie. (Courtney Africa / Africa News Agency via AP, Pool)

The South African-based organization, Waves for Change, had the royal couple join in on a group mindfulness activity at Monwabisi Beach, having each participant notice a strength of theirs and meditate about it.

One of the coaches playfully suggested to the Duchess that her strength was dancing, as she and the Duke of Sussex showed off their dancing skills during a visit to Nyanga on Monday.

After showing off their dance moves once more with everyone, Duchess Meghan, 38, got serious and revealed to the sharing circle what her true strong point is. She said their new son, Archie, has given her and her husband a "new strength" and they are "learning and developing" as they go.

She went on to say the Duke, 35, is the "best dad." The Prince replied that Markle is "the best mum" to their baby boy.

According to People Magazine, Ash Heese, a manager for Waves for Change, stated that the royal couple was very engaging and willing to speak to the coaches.

Heese also said that the couple made everyone feel relaxed and engaged, since the young mentors were "incredibly relaxed with them."

After their visit on Tuesday, the Duke and Duchess of Sussex were gifted with a onesie for Archie and a framed picture of the “power hand” activity.

On Monday during the first stop of their tour at the District Six Museum, an excited onlooker asked the couple where baby Archie was. The Prince went said the soon to be five-month-old was away sleeping.

Markle made a touching tribute to the late Princess Diana when stepping off the plane with her baby in South Africa on Monday, dressing Archie in a white knit hat with a pom-pom. Diana chose a very similar hat for baby Harry to wear when they arrived at Aberdeen Airport in Scotland in January 1985, when Harry was also about four months old.

A royal source stated that the new parents hope to include Archie in the program as it's his first official royal tour, but "it is difficult to schedule because he is five months old."

Meghan and Harry welcomed their first son to the world this past May.

Meghan Markle and Prince Harry dote on Baby Sussex. The royal baby made his grand debut on May 8. (Getty)

"It's magic! It's really amazing. I have the two best guys in the world, so I'm really happy," the Duchess said during Baby Sussex's debut in May. "It's just been a dream."

“It's been the most amazing experience I could ever possibly imagine," The Duke of Sussex added. "We're looking forward to spending precious times with him as he slowly, slowly starts to grow up."