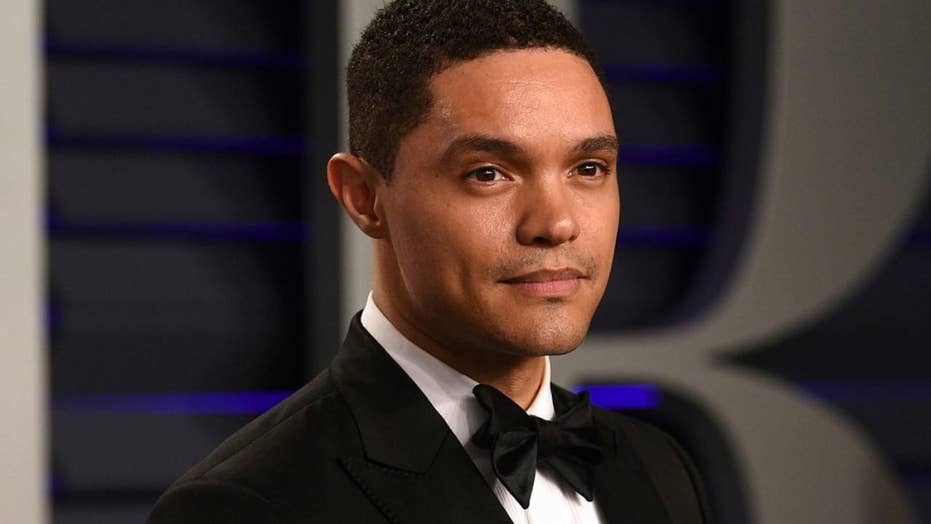 Trevor Noah on Joe Biden allegations: ‘Smelling hair is one of the creepiest things you can do’

Several members of the mainstream media have gone to bat for former Vice President Joe Biden as he faces allegations of inappropriate touching and hair sniffing, but at least one late-night host has a different take on the touchy-feely pol.

Two women have come forward with claims that the current Democratic frontrunner made them feel uncomfortable during their interactions. Former Democratic candidate for Nevada lieutenant governor Lucy Flores says Biden put his hands on her shoulders, smelled her hair, and kissed her on the back of her head in 2014 at a campaign event. And former congressional staffer Amy Lappos alleges that Biden grabbed her head and neck and touched noses, expressing that she thought he was going to kiss her on the mouth at a fundraiser in 2009.

“In my many years on the campaign trail and in public life, I have offered countless handshakes, hugs, expressions of affection, support, and comfort. And not once – never – did I believe I acted inappropriately. If it is suggested I did so, I will listen respectfully. But it was never my intention,” Biden said Sunday. “I may not recall these moments the same way, and I may be surprised at what I hear. But we have arrived at an important time when women feel they can and should relate their experiences, and men should pay attention. And I will.”

But the potential 2020 hopeful has found many defenders in the media who are downplaying the controversy.

“There’s a lot of things I know about Joe Biden– I’ve known him for a long time — he is extremely affectionate extremely flirtatious in a completely safe way,” Brzezinski said.  “I am sure that somebody can misconstrue something he’s done. But as much as I can know what’s in anyone’s heart, I don’t think there is bad intent on his part at all.”

Washington Post columnist Jonathan Capehart appeared on MSNBC and claimed he has had the same “intimate” interactions with Biden.

“He put his forehead on my forehead. It was in November 2017. I had just done a one-on-one conversation with him in Schenectady, and he was really happy with the way it went,” Capehart recalled. “It was his way of congratulating me, congratulating us on an event that was well done.”

“The View” co-hosts Whoopi Goldberg and Meghan McCain both offered strong defenses of the former vice president. Goldberg referred to Biden as “overly familiar” and a “hands-on kind of guy.” She repeatedly suggested to Flores that she should have said something to Biden immediately instead of waiting five years to come forward.

McCain praised Biden as a “retail politician” and called him a “good, decent man” who has never made her feel uncomfortable.

McCain praised Biden as a “retail politician” and called him a “good, decent man” who has never made her feel uncomfortable. (Photo by Heidi Gutman/ABC via Getty Images)

“Some people, obviously, found it offensive, but they didn’t feel comfortable saying anything and now they feel comfortable and Joe is listening and Joe will change,” Boxer said, adding that he’s a “terrific person. “

“Boy, I can’t beat that. I thought that was a great perception of all the bases here,” Matthews responded.

MSNBC political analyst Susan Del Percio agreed with Boxer, telling Matthews it’s “just the way he is” and expressing that she didn’t think he did anything wrong. She dismissed the allegations as a “political hit job” to prevent Biden from running.

Over on CNN, former Obama White House official Jen Psaki, who served with Biden, vouched for her colleague's character.

“There were times when he would grab my hand in meetings to make a point. There were probably times where he kissed the back of my head. I never thought anything of that. I didn’t find it creepy, but then again, I was in the administration,” Psaki told CNN anchor Anderson Cooper.

Meanwhile, CNN anchor Don Lemon warned Democrats to stop apologizing for things because according to him, that may pave the path towards “#Trump2020.”

“This election will not be about who has the better apology for the past, at least I hope not… The past is over! It will be about who has the better ideas for the future,” Lemon said. “Some things are worth apologizing for, but some things are not. Let’s just be honest. Should you continue to look at things through a 2019 lens from 10, 20, 30, 40 years ago? Otherwise, who would want to run for president? No one is perfect. If Democrats keep like this, good luck. #Trump2020.”

Both Matthews and Lemon also tied President Donald Trump to the Biden conversation, invoking the infamous Access Hollywood Tape and the multiple allegations made against him during the 2016 election.

“I don’t care who it is. Even if you’re in a relationship, if you smell your girlfriend’s hair, she won’t say anything, but in her head, she’ll be like, ‘Is he a serial killer?’” Noah said. “Like honestly, smelling hair is one of the creepiest things you can do. It’s on the list of creepy things. It’s right after collecting doll parts and sneezing with your eyes open.”

Noah also slammed Biden over the second woman’s claim that he touched noses, suggesting it was “cultural appropriation.” (AP)

The Comedy Central star was an equal opportunity critic, however, mocking both the former vice president and current Vice President Pence because one is “smelling women’s hair” while the other “refuses to be near a woman without a chaperone,” adding there’s no middle ground between “Me Too and 'Handmaid's Tale.'”

Noah also slammed Biden over the second woman’s claim that he touched noses, joking it was “cultural appropriation.”

“If rubbing noses was just Biden ‘being cute’ and being a ‘harmless grandpa,’ how come you’ve never seen him do it with men?” Noah asked.

The “Daily Show” host added that some are “freaking out” that Biden’s 2020 campaign may end before it even begins because then Democrats “only have 16 candidates to choose from and only six of them would be white guys.”